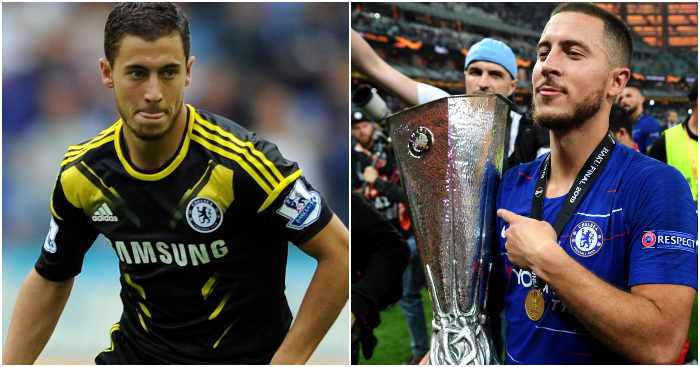 Eden Hazard’s move to Real Madrid was confirmed on Friday night, with the Spanish giants paying a fee which could rise to £15omillion. Given these numbers, they’ve got a bargain. No wonder the Blues said “goodbye with sadness”…

– Hazard scored 110 goals in all competitions for Chelsea.

– He registered 92 assists in all competitions.

– Hazard has been directly involved in a goal every 133 minutes during his Chelsea career.

– By scoring 85 Premier League goals since his debut in 2012, he is fourth highest scorer in the top flight in that time, behind centre-forwards Sergio Aguero (139), Harry Kane (125) and Romelu Lukaku (113).

– Hazard recorded more assists than anyone else in the Premier League this season.

– Hazard has played for six different managers at Chelsea

– He was most productive for Maurizio Sarri, scoring or creating a goal every 103 minutes in all competitions.

Eden Hazard completed 916 take-ons during his seven Premier League seasons, more than any other in the division in that time.

Here are his favourite opponents. 🕺 pic.twitter.com/XBDRwO3GTV

– Hazard scored most Premier League goals against Newcastle and West Brom, netting seven times in 11 games each side.

– Of the 30 opponents Hazard faced in the Premier League, he failed to score a goal against only Fulham, Middlesbrough and Reading.

– Bournemouth, Everton and Middlesbrough are the only Premier League opponent Hazard failed to record an assist against.

– Hazard was directly involved in a goal against all 30 Premier League opponents except Middlesbrough.

– Wolves are the only Premier League opponent Hazard has failed to win against.

– Hazard scored 48 out of the 55 penalties he took for Chelsea in all competitions.

– Hazard had only two Premier League penalties saved – by Julian Speroni and Willy Caballero – but he scored the rebound each time.

Scenes at the Bridge! 🎉

Eden Hazard scores the final penalty and Chelsea are heading to Baku!

– He scored 53 first-half goals for Chelsea and 55 in the second half, with two coming in extra-time.

– Hazard has been named in the PFA Premier League Team of the Year on four occasions – but not this season.

– Hazard has won two Premier League player of the month awards, in October 2016 and September 2018.

– Hazard has won the Chelsea Player of the Season award four times in seven seasons at the club.

– He has won Chelsea’s Goal of the Season award three times.