Home F365 Features Ederson and the Risk vs. Reward life of a sweeper keeper 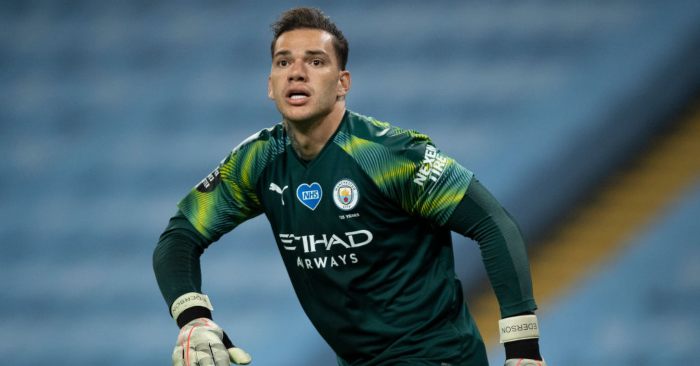 Record-breaking numbers tuned in to watch Southampton record a 1-0 win over Manchester City and as (the oversung) Ederson was spotted miles off his line for what turned out to be the Saints winner on Sunday night, it reminded us all of the risk assessment a Pep Guardiola goalkeeper has to sign as part of his contract – you may be vulnerable to being lobbed.

As the Man City man joins the likes of Peter Schmeichel, Artur Boruc and Adrian in the hall of ‘being lobbed from a long way out’ fame, let’s revisit some other times the goalkeeper’s wandering nature has been punished and revel in the joy of a keeper being made to look rather silly…

v Liverpool, 2018
The City goalkeeper first alerted the world to his wandering tendencies in January 2018, when the soon-to-be centurions travelled to Anfield. Liverpool overwhelmed City and ended Guardiola’s invincible run up to that point of the season – with the Reds storming to a 4-1 lead with 20 minutes to play.

It was this fourth goal that Ralph Hasenhüttl almost certainly showed to his strikers in training last week. Ederson raced out of his penalty area like a bat out of hell to sweep up a Liverpool attack. The Brazilian quickly sent a first-time, but conspicuously low, pass sailing into the path of one Mohammed Salah, who was scoring at an unfathomable rate that season. Salah didn’t give the goalkeeper the courtesy of a second to comprehend his error and with robotic efficiency he looped the ball back where it came from.

The ex-Benfica goalkeeper could only crane his tattooed neck upwards, watching the ball spin and glide toward his own goal in almost philosophical fashion. It was predestination vs. free will. The number one – or 31 – could only look from the outside, unable to influence the inevitability of the goal.

v Manchester United, 2020
Another rather memorable – and rather recent – addition to the Ederson hall of blame came in March’s Manchester Derby at Old Trafford. In the dying minutes of the game, with United leading 1-0, the hero of our piece decided to chuck a wayward ball just shy of Benjamin Mendy, landing fatefully at Scott McTominay’s right foot. The midfielder bent a stunning shot back at the goalkeeper in a taunting fashion and the stadium erupted – quite unlike the muted cheers from the bench after Adams’ goal.

The City goalkeeper’s half-arsed attempt to get back in time to stop the effort looping in was on display again here, a well-rehearsed routine by now. Ederson could only puff out his cheeks and direct a few Portuguese curse words at himself as McTominay was swarmed by his ecstatic teammates.

Ederson’s mistakes aren’t talked about enough. From the ones I can remember, he conceded goals on his near post against us home and away.
Made a bad clearance for mctominay to score.
Took an unnecessary risk leading to a goal yesterday. If it was DDG, people would say he’s over.

v Southampton, 2020
Perhaps it’s not entirely fair to lay the blame at the goalkeeper’s feet. After all, it’s Pep Guardiola’s preferred style of play from his number one and the Brazilian’s sweeping and passing range is often key to City’s success. Let’s not forgot that Joe Hart was ostracised for the crime of not using his feet enough – with the ex-City stopper admitting last week that the only way to change this perception of him would be if he dribbled around an every player and scored.

After the match Saints manager Ralph Hasenhüttl was beaming and said he’d told his players to be watchful of Ederson’s tendency to play as a libero and look to punish him – which Che Adams duly did. Adams’ shot was tremendous and not at all befitting of a man who has struggled to hit the proverbial barn door this season; many could’ve been forgiven for thinking he had been burying chances at the same rate as strike partner Danny Ings.

Ederson looked rather relaxed, sauntering about on the edge of his area before performing a panicky backpedal as Stuart Armstrong pounced on Zinchenko’s giveaway to win back possession high up the pitch for Saints – something which only Liverpool have done with more regularity this season.

Football is a game of risk versus reward. Arguably, the goalkeeper is the position where the spotlight of scrutiny shines the brightest. For every lauded save, there’s an admonished error and for the goalkeepers who dabble in a riskier style of play, these errors shine even brighter. Ederson is a tremendous goalkeeper, of that there is no doubt, but Manchester City’s defeat to Southampton was one of those days where the Brazilian earned the criticism that he – and his manager – invite.