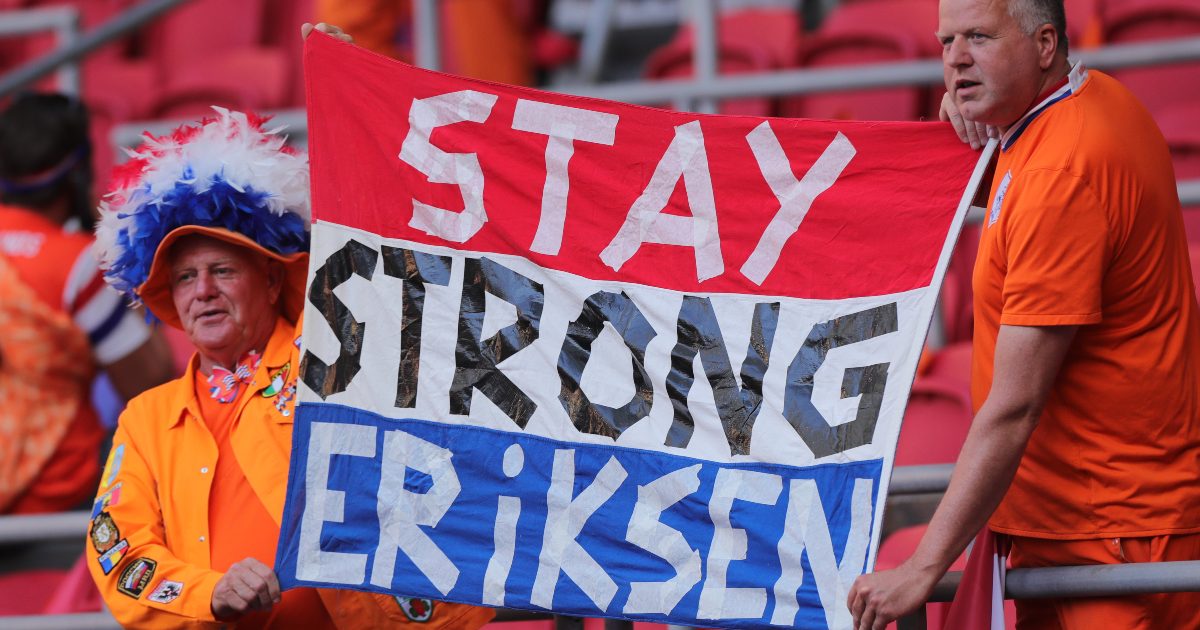 Charlie Edinburgh, son of Justin Edinburgh who passed away two years ago, hopes Christian Eriksen’s collapse at Euro 2020 will push through Justin’s Law.

The former Tottenham midfielder suffered a cardiac arrest during his country’s opening game with Finland on Saturday and had to be resuscitated on the pitch.

Eriksen remains in hospital but provided an update on his Instagram page on Tuesday saying “I feel okay”.

Ex-Spurs defender Justin Edinburgh, who died two years ago this month, also sustained a cardiac arrest while working out at a gym in Chelmsford but, with no defibrillator on site, he did not survive.

His son Charlie set up the Justin Edinburgh 3 Foundation to continue his dad’s legacy, with one of the goals to campaign for Justin’s Law, whereby it is mandatory for all health and sports facilities in the UK to be equipped with a defibrillator.

He told the PA news agency: “I was watching it live at the time with my mum and it was horrific, to be honest. It brought back a lot of bad feeling and emotion. We were sitting there in tears just praying he would be OK.

“Obviously the key factor of why Christian is still alive now and will be able to live to tell his story is because there was a defibrillator available and they utilised it as quickly as they could, so again for us it magnifies the work we are doing and why we are campaigning for Justin’s Law.”

Since the JE3 Foundation launched in the summer of 2019, nine defibrillators have been donated to sporting venues; this includes non-league clubs Billericay and AFC Rushden & Diamonds where Edinburgh managed.

While defibrillators at major stadiums for Euro 2020 and in the Premier League are expected, it is further down the football pyramid where they are not readily available, especially with a price between £750 and £1,300.

Since Eriksen required emergency treatment on Saturday, more than 70 sports clubs, schools and community groups have launched fundraising campaigns to help them afford a defibrillator.

“From our perspective more needs to be done,” Edinburgh insisted.

“We talk about people performing in their sport to the highest level or working in a gym to better their fitness levels, they are pushing their bodies to the limit and this life-saving piece of equipment needs to be there should something like what happened to my dad and Christian occur.

“It will change it from being about luck because there will be more outcomes like Christian. It won’t be Justin was unlucky but Christian was lucky because of where he was. This is why we are pushing hard for this so we are saving lives and it is the ripple effect it has.

“We felt it first hand with losing dad and how tragic that was and the outpouring for him, but we want to make sure no other family has to experience what we went through.”

The recent second anniversary of Edinburgh’s death was marked with the launch of the JE3 Foundation website – je3foundation.com – while plans are in place for large-scale cardiopulmonary resuscitation (CPR) workshops to be hosted across the UK later in the year.

A minimum of three defibrillators per quarter will also be donated to sports clubs and venues in memory of the former Leyton Orient boss, with a petition set up to raise awareness of Justin’s Law quickly gaining signatures and being shared on social media.

Edinburgh said: “With the JE3 Foundation, we speak about access, training and campaigning, so we are trying to make the defibrillators accessible with the donations, offering training to educate people around the importance of CPR and how to use a defibrillator with confidence and campaigning for Justin’s Law.

“I am really hoping Saturday’s events can push it through and make the relevant authorities stand up and take notice to see more needs to be done because this can’t continue to happen and people can’t continue to lose their lives when there is a piece of equipment available which can help save them.”