Home F365 Says He stoops to conquer: Cavani was worth the wait… 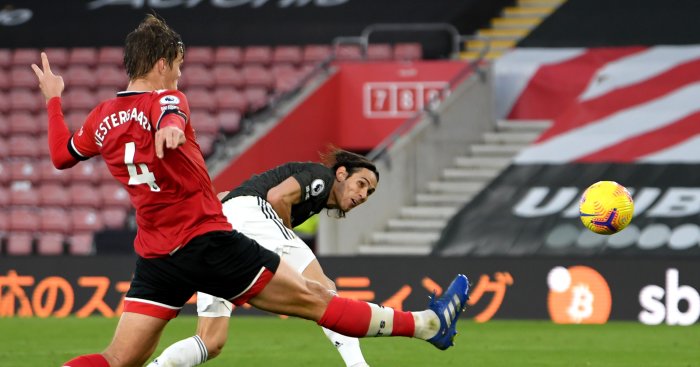 Manchester United started the second half against Southampton with ten men as Edinson Cavani buggered about putting his boots on. They finished it with three points thanks largely to their tardy substitute.

United were, in truth, a touch unfortunate to find themselves 2-0 down at the break in a game they had controlled until a double burst from set-piece maestro James Ward-Prowse. He whipped in a ferocious corner for Jan Bednarek to net the opener before scoring himself with a free-kick in what was officially dubbed Ward-Prowse Territory on commentary moments before he curled home his third such strike of the season.

Either side of that period, it had been nearly all United. Bruno Fernandes and Donny van de Beek were both enjoying themselves against a Southampton side curiously off the pace despite their recent good form. Jannik Vestergaard was almost caught out by Mason Greenwood early on, while Alex McCarthy had to make up for his own horrible error with an extraordinary triple save to deny Greenwood, Fernandes and then Fernandes again.

Eventually, though, Cavani stepped off the bench for the second half and changed the game. In truth, that was not so much to do with the general flow but more with the efficiency of the finishing. He made the first for Fernandes before picking out the bottom corner with a couple of gorgeously precise stooping headers. The first came in the 74th minute, the second in the 92nd. Nobody else in this United squad is scoring either of those chances right now.

Cavani was, in the literal and general sense, United’s match-winner. But it is only the extension of an established pattern. Whatever travails United have been through this season, they have now maintained their 100 per cent away record in the league this season. Going back to last season, that’s eight away league wins in a row. Impressive numbers for any side, but even more so for one that really hasn’t been all that convincing.

What you certainly cannot accuse this United side of is quitting. That perfect record on their travels this season has come despite conceding first in all four of their away games. They’ve taken the lead in the 86th and 92nd minutes in two of them, and after the final whistle in another. Even against Everton, the points were not totally secure until Cavani’s injury-time strike.

You can look at this two ways, of course. On the one hand it seems impossible for United to continue to bottle lightning in this fashion. On the other, it’s happening far too often to be a coincidence.

It seems glib there is something in the identity of the manager that contributes to United’s late goals, but there may be a semblance of truth in that. They keep walking into trouble, but you have to admire the way they extricate themselves.

And however fragile this run of away wins may seem also depends on how you view United’s ambitions for the season. They probably are too far back, too inconsistent in general despite the seeming reliability of their away-day formula, to mount a meaningful title challenge. But they do have something about them in adversity. In this silly season, it could well take them quite far.

The extra two points secured in injury-time here make such a huge difference to the whole feel of the thing. Without them United are still 10th, still mid-table and going nowhere. Suddenly they’re seventh and right on the fringe of things again. Whether that is acceptable for Manchester United is up for debate, but for a flawed squad under an unproven manager things suddenly don’t seem so bad.

But while it is obviously the late turnaround that allows the most positive spin to be put on everything, the best thing for United here may well be that it was only (‘only’) the scoreline that needed to be turned around rather than the game itself.

As a team, United really did little wrong in the first half. The shape was good, the movement was good, the finishing at crucial moments wasn’t. The individual decision-making wasn’t always perfect, notably Fred’s daft challenge on Moussa Djenepo to give away the free-kick that Ward-Prowse scored with something approaching inevitability.

These are individual errors that need correcting and avoiding in future; they are the sort of thing that in defeat or even after a draw would be maddening for a manager. It is inconceivable that the need to avoid giving away cheap free-kicks around the box wasn’t a key pre-match discussion point for the players.

But even if you don’t go on and get the result as United did, the positives were still there. Even if United had lost, they would have been able to point to Fernandes’ continued influence and quality, to the fact that Van de Beek is growing and improving game by game.

Thanks to the biggest positive of the lot, those are even bigger boosts than before. Fears over Cavani’s age are starting to look hugely unfounded. He was, in more ways than one, worth the wait.