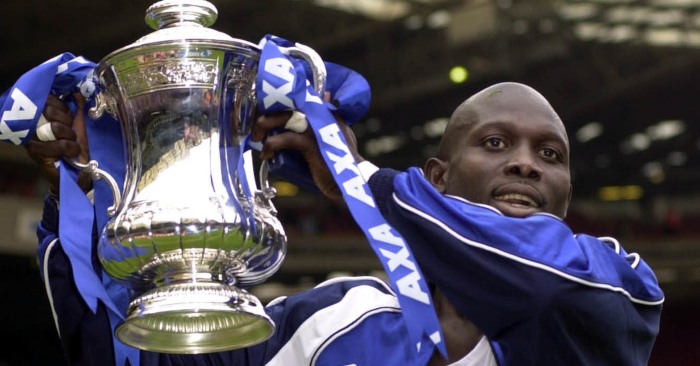 So, it’s Edinson Cavani instead of Jadon Sancho. The Uruguayan’s agent will be happy but Manchester United fans will be far more reluctant to make a song and dance of the former PSG man’s arrival until he proves he’s not past his best on the pitch. Here’s an XI made up from players who arrived in the Premier League a little too late.

A five-time winner of the Scottish Premier League with Rangers in the nineties, Andy Goram’s career appeared to be winding down after he left Ibrox. But an injury crisis at Manchester United saw the 37-year-old make his Premier League debut at Old Trafford in 2001. The Scot looked uneasy in goal for the champions and he had seemingly forgot some of the basic rules of football in his twilight years after picking up a back-pass in the game against Coventry City. If you fancy a goalkeeper challenge, try naming three World Cup-winning ‘keepers who made Premier League debuts in their thirties.

Having helped Jose Mourinho’s Inter Milan to an incredible treble triumph, Maicon finished ahead of fellow defenders Dani Alves and Philipp Lahm in the 2010 Ballon d’Or running. Manchester City fans could’ve been forgiven for wondering where that Maicon had gone come the 2012/13 season, with the Brazilian underwhelming during his one-year stay at the club. Former AC Milan star Thomas Helveg is another option at full-back following his uninspiring displays for Norwich City in the Canaries’ 2004/05 campaign.

Another defender who was a key figure in a treble win was Dutch destroyer Jaap Stam, who proved to be one of the last pieces of the puzzle in Alex Ferguson’s quest for Champions League success with Manchester United. Stam’s abrupt departure at the start of the 2001/02 season raised eyebrows, as did the arrival of his replacement. Laurent Blanc had been one of the world’s finest centre-backs during the nineties but he wasn’t up to the task of filling Stam’s sizeable boots in his mid-thirties, with Fergie later admitting the whole saga was a big mistake.

Sorry, there’s one more myth I want to dispel: this accepted truth that Alex Ferguson created future managers at Manchester United. I’m happy to be told otherwise but the only former charge I can find who won a trophy outside of minor leagues is Laurent Blanc, who joined aged 35.

Cavani isn’t the first legendary Uruguayan to arrive in the Premier League in his thirties, with Diego Lugano ‘enjoying’ a spell at West Bromwich Albion in the 2013/14 season. The Baggies just about stayed up but Lugano barely featured at the Hawthorns after it became evident he was past his peak. Leeds United fans will be getting excited about seeing Raphinha following the transfer window but they won’t have fond memories of his fellow Brazilian Roque Junior. The centre-back looked far from a World Cup and Champions League winner during a loan spell at Elland Road in the club’s disastrous 2003/04 campaign.

Just like Roque Junior, Branco arrived in England with a great reputation, having been part of a World Cup winning Brazil side. The left-back converted a spot-kick for his country against Italy in the 1994 final penalty shootout and had previously enjoyed success in European club football with Porto. However, he was far from his best when he joined newly-promoted Middlesbrough in the 1995/96 season, failing to dislodge Curtis Fleming from the first team at the Riverside.

Admittedly garbage for us mind.

Branco was accused of being out of shape during his time in Premier League, as was former Parma icon Thomas Brolin. The Swede joined Leeds in 1995 and was already a familiar face in England after his winning goal against the Three Lions at Euro ’92. However, Brolin didn’t look like the same player during his time in Yorkshire, clashing with Howard Wilkinson and later George Graham before embarking on another ineffective spell at Crystal Palace in the Eagles’ doomed 1997/98 season.

Bastian Schweinsteiger knows all too well about Dele Alli’s current situation with Jose Mourinho, after being on the receiving end of the Portuguese manager’s disdain during his spell at Manchester United. The World Cup winner no longer had the legs to run the midfield like he had done during his halcyon days at Bayern Munich and Mourinho wasn’t prepared to accommodate the Louis Van Gaal signing in the 2016/17 season. Serial UEFA Cup winner Dino Baggio also qualifies for this side, having joined Blackburn Rovers for an unmemorable spell towards the end of his career.

Jari Litmanen was by no means a disaster at Liverpool but his spell at Anfield failed to live up to the hype that surrounded his arrival in England. A Champions League winner with Van Gaal’s Ajax, the Finnish star was one of the World’s finest playmakers during the nineties, finishing in third place at the 1995 Ballon d’Or; with former Spurs star Jurgen Klinsmann and AC Milan’s George Weah (more on him shortly) the only players ranking above him.

On this day in 2001 Jari Litmanen scored his first goal for Liverpool. Shame we never quite saw the best of him pic.twitter.com/xKRs4YYpCp

Eight years before Litmanen was picking up bronze at the Ballon d’Or, Portuguese sensation Paulo Futre took home silver, finishing behind Ruud Gullit at the 1987 awards after helping Porto to an extraordinary European Cup win over Bayern Munich. A decade later West Ham United fans were wondering whether Futre could make the same impact at Upton Park as a veteran Gullit had made at Chelsea the previous season. Unfortunately, after persistent injury problems, he wasn’t the player he once was and there was no coming back for Futre.

Gullit’s arrival and subsequent success at Stamford Bridge acted as the catalyst for a cosmopolitan revolution at Stamford Bridge, with world-famous names like Gianfranco Zola and Marcel Desailly following in the Dutchman’s footsteps. Legendary Liberian striker George Weah made his Premier League bow for the Blues in the 1999/2000 season but wasn’t quite the same player who tore defences apart for AC Milan in the peak Football Italia years.

Oh George Weah played for Chelsea? How didn’t I know that.

You know the story; 2006, a lot of money, a striker who had been named as the best player in Europe a couple of years earlier and then the subsequent realisation that he couldn’t replicate his AC Milan form in the Premier League. Another familiar face from Serie A could line up for the side, with Roberto Mancini one of Italy’s deadliest forwards during the division’s spell as the greatest league in the world. He joined Leicester City in 2001 at 36 years of age but spent his most productive years at Sampdoria, where he linked up with Gianluca Vialli to help the Blucerchiati to their first ever title win in 1991.