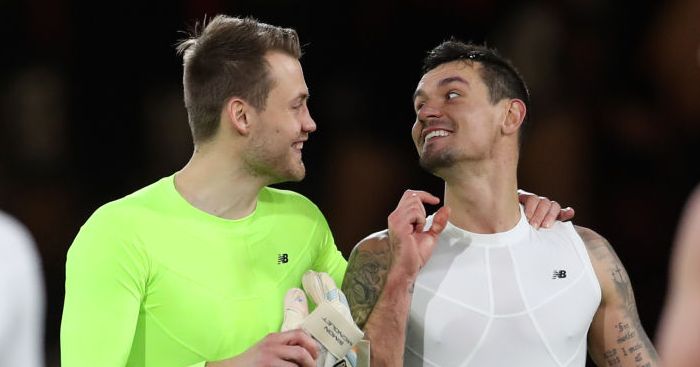 European champions Liverpool are yet to make significant movement in the transfer market, loaning Sheyi Ojo to Rangers, releasing eight players and selling Danny Ings for £20m as part of his loan move to Southampton last year.

They have been bizarrely linked with Kylian Mbappe, before publicly branding speculation concerning Nicolas Pepe as ‘pure lies’.

But their main business could concern outgoings, with Mignolet attracting interest from both Palace and Brighton.

The London Evening Standard suggest clubs in Ligue Un and the Bundesliga are monitoring Mignolet’s situation, with two years left on his Anfield contract and little chance of displacing Alisson as their first-choice goalkeeper.

The Standard also claim the 31-year-old ‘is thought to be available for around £8million’, but ESPN deny that outright.

They state that ‘would fall short of his worth’ as an experienced, seasoned veteran and valued member of the squad, and that Liverpool ‘would only consider the possibility of letting the keeper leave if he was seriously enthused by a suitor and the fee is acceptable’.

Mignolet’s status as a member of the club’s ‘senior players’ committee’ has even seen the influential Edwards refuse to set an asking price.

Jurgen Klopp referred to Liverpool’s “players’ committee” in October, saying he established it when he was appointed manager in October 2015, with Jordan Henderson, James Milner, Lucas Leiva, Adam Lallana and Philippe Coutinho among its members.

As the club’s second longest-serving player, Mignolet is now part of that illustrious group.