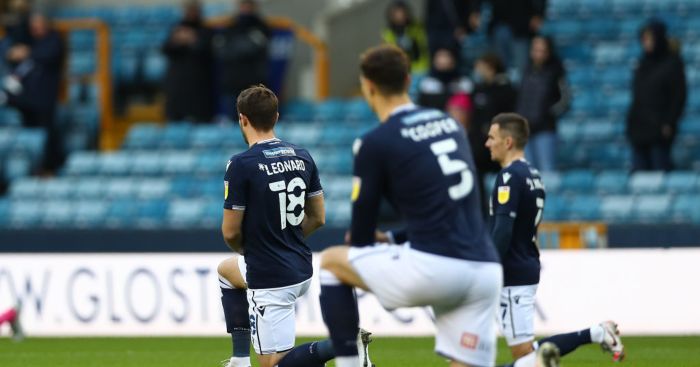 The EFL has hailed the “proactive” approach towards racism taken by Millwall and QPR ahead of Tuesday night’s Championship match at the Den.

Millwall announced on Monday that instead of taking a knee for the fixture, players will link arms in “a show of solidarity for football’s fight against discrimination.”

The teams will also hold up an anti-racism banner, and Millwall will have the Kick It Out logo on the front of their shirts.

OPINION: Millwall muddle shows taking the knee may have run its course

A statement read: “The EFL welcomes the positive, proactive approach to be taken by Millwall and Queens Park Rangers players ahead of tonight’s Championship fixture as both set of squads continue to raise awareness of inequality and discrimination facing society.

“We will facilitate the communication of the message that discrimination in any form is unacceptable and not welcome within our game or our communities – not today or any day.”

On Saturday, Millwall’s game against Derby at The Den and Colchester’s home match against Grimsby both saw fans boo players as they took a knee. The Football Association is investigating both incidents.

QPR players will stand shoulder to shoulder with their Millwall counterparts prior to kick off, although some visiting players will be “fully supported” if it is their wish to take a knee.

In its statement, the EFL stressed the importance of any gestures aimed at eradicating discrimination, and said players should be “applauded” for their choices in that respect.

“EFL players who have chosen to ‘take the knee’ before games or participate in similar types of initiatives are using their platform in front of millions across the world to make a statement about eradicating all types of prejudiced behaviour, encouraging attitudinal changes and creating unity,” the statement continued.

“Players often receive widespread criticism and negativity for merely doing their jobs but here they are leading the way, trying to effect positive change and they should be applauded for taking a stand, showing solidarity and setting an example for others to follow.”