Home F365 Features Eibar in Europe? The fairytale is not over yet… 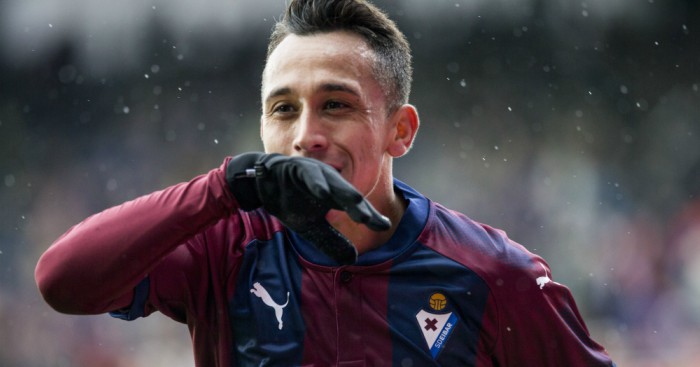 “Luckily it’s not only the budget that counts when it comes to the league table.” Those were the words of Eibar manager José Luis Mendilibar after his side thrashed Sevilla 5-1 on Saturday, a victory that must rank as the greatest moment of the tiny Basque club’s four seasons in Spain’s top flight.

Given the relative resources of the two clubs, to call this an upset would be a huge understatement. The town of Eibar has a population 25 times smaller than that of Seville. The club’s Ipurua stadium has a capacity of 7,083, six times smaller than that of their illustrious opponents. Since Eibar’s promotion to the top flight in 2014, they have spent a grand total of €18.3m on players, a figure dwarfed by the €210m spent by Sevilla in the same period.

Admittedly, Sevilla did make six changes to their starting line-up with one eye on their upcoming Copa del Rey semi-final second leg against Leganés, but they certainly did not throw the game. The side they put out still included the likes of Steven N’Zonzi, Nolito and Wissam Ben Yedder, but from the outset they were unable to cope with Eibar’s power, speed and directness.

Bizarrely, Sevilla manager Vincenzo Montella blamed the small pitch at Ipurua for stopping them from playing their game, when in truth it is only very slightly smaller than the pitch at Sevilla’s Sánchez Pizjuán stadium. The reality is that Sevilla were totally outplayed, and Eibar fully deserved their win.

The emphatic nature of Eibar’s victory is a huge statement of how far they have come in the last few years. The win has taken them above Celta de Vigo into seventh place, now only one point behind Sevilla, and just seven points behind fourth-placed Real Madrid. They are now unbeaten in their last eleven La Liga games, a run that has included a 2-1 victory over Valencia and a 5-0 thumping of Real Betis. A Europa League place is very much within reach.

This would have been beyond any Eibar fan’s wildest fantasy just a few short years ago. The fact that they are in La Liga at all is remarkable in itself. They had to rely on a great deal of goodwill to get there, and a huge chunk of good fortune to stay there.

In 2014, Gaizka Garitano led them to the Segunda División title, and promotion to La Liga for the first time in their history. But the dream almost ended before it began. Despite the club being completely debt-free, the Spanish FA enforced a rule stating that they had to have available capital to the value of 25% of the average expenditure of the Segunda División. They were given until August 6th to raise €1.7m to make up the shortfall, and avoid demotion to Segunda B.

Thanks to a crowdfunding drive, the money was raised and Eibar were able to take their rightful place in the top tier. As expected, they struggled as a tiny fish in a large pond, and were relegated at the first attempt after finishing 18th in the league.

But this time, divine intervention came in the form of another club’s misfortune. 13-th-placed side Elche were found to have breached rules relating to debt and mismanagement of funds, and were punished with relegation. Eibar were reinstated in their stead.

It’s fair to say that the second chance has given them a new lease of life. Following their reprieve, they’ve steadily improved year on year, finishing 13th in 2015-16 and tenth in 2016-17.

Their big challenge now is to consolidate their place in the league. With such a small stadium and fan base, they are unable to generate much in the way of match day and merchandising revenue, and the distribution of television money in Spain is geared heavily in favour of the top clubs. The only way to get a bigger cut of the TV cash is to finish consistently high in the league over a five-year period, which is easier said than done, particularly if you have very little money to spend to begin with.

If they were to land a European place this year, it would be a huge boost financially, and for their standing within the game. The funds raised could be invested in the squad, and the status of playing in European competition would attract players to the club, helping them to kick on to the next level.

If they ultimately fall short of European competition, though, it would not be the end of the world. The club is run prudently and operates within its means, and Mendilibar has assembled a squad that is greater than the sum of its parts.

In a system that heavily favours the rich, established clubs, this small, provincial side has defied the odds to gatecrash the elite. Don’t expect them to stop confounding expectations now.