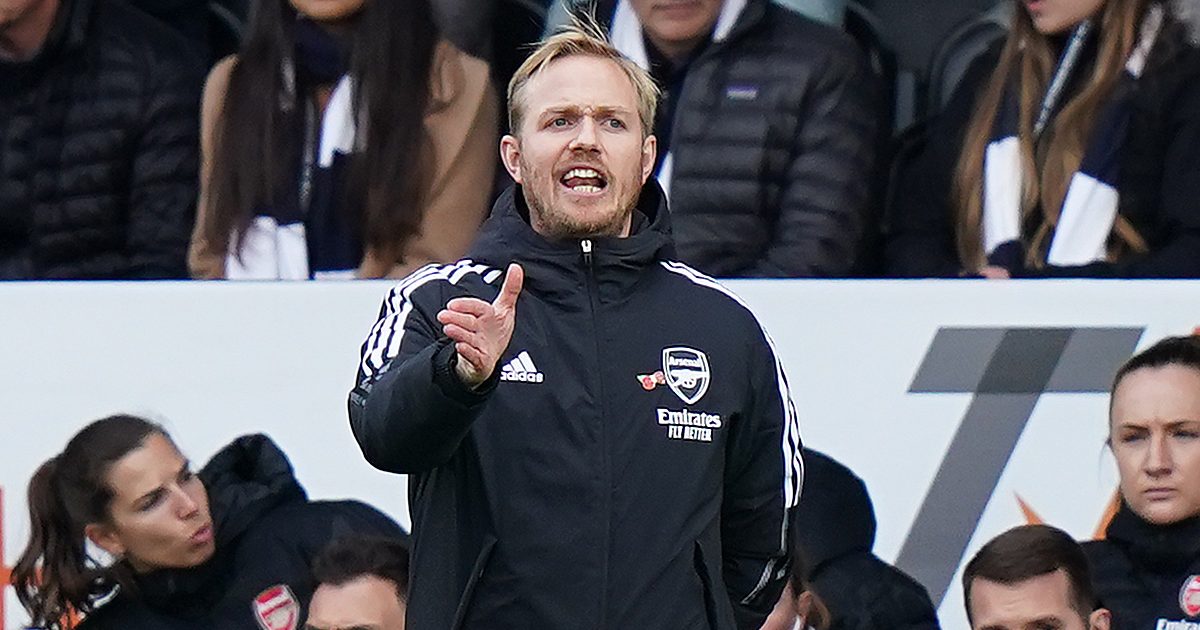 Jonas Eidevall has insisted that his Arsenal side have “developed drastically” ahead of the women’s FA Cup final on Sunday.

Eidevall took over at Arsenal over the summer. They beat Chelsea 3-2 in their first game of the 2021/22 Women’s Super League season.

The London rivals face off again this weekend in the FA Cup final. The Gunners boss has conceded that Chelsea have improved since that loss earlier this term.

Arsenal have won six and drawn the other of the league games that have followed, and are currently a point clear of Hayes’ team at the top of the table.

Eidevall told a press conference on Friday: “I think when we look back to where we were at before that game and during that game, I think we have developed drastically and we have much, much more maturity and have lived through a lot of experience and have learned from that.

“Both in defence and in offence I think we have developed – and so have Chelsea, though. I’m excited and looking forward to the game.”

Asked how confident he felt, Eidevall said: “At game day I feel very, very confident. Before game day I think about everything that can possibly go wrong because I need to prepare for it.

“One week from the game, I’m definite that we’re going to lose and I panic and have to do everything, rewatch all the videos one, two, and three times again, and then we start working with it in the group and so on, and then when we reach game day, I’m 100 per cent. I know I will reach that point this time also.”

Eidevall was then asked if he had any superstitions, and the Swede said: “I do have some – I think that’s healthy because then you feel like you have some control over the uncontrollable.

“I don’t let any black cats cross my way, ever. I don’t harm any black cats either, it’s also important to say! But I have been sometimes driving around and rerouting for a couple of miles. That’s the only thing I have. You feel a little bit silly when you are doing it but it’s the one thing I can control.

“Now probably if Emma Hayes sees this she will probably buy a thousand cats with all the money they have at Chelsea and try to send them all over our road – that was probably a really bad giveaway from me, (I’m going to be) invaded by black cats!”

Eidevall – who is without defender Leah Williamson due to injury – confirmed winger Tobin Heath would also not be available for Sunday’s game, but did not mention any other injury concerns.

With regard to monitoring players’ fitness during international breaks, Eidevall said: “I try not to get on to that emotional roller coaster.

“I remember in Germany some years ago when I was a coach still in Sweden, and I was in a very nice restaurant with friends. (I started getting) text messages with players being injured from the national team and it just completely ruined the whole evening, with this eight-course dinner we were having – I just went home early.

“After that, I decided I can’t control it, so why would I spend a lot of energy on it? Those things that will happen will happen and the important thing is how do we respond to it. That’s one thing, and another is that it’s really important for us to understand the need for recovery.”