These players have plenty of caps between them, but are not even in contention for a call-up. Poor Ashley Young. 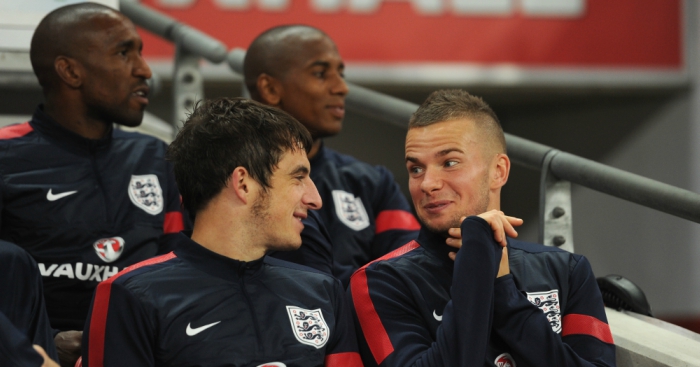 Before this week, this would be a list with Fabian Delph’s name written all over it. Use that as inspiration, fellas.

Roy Hodgson described it as “one of the hardest” decisions he ever had to make as England manager, and it is difficult to argue he got it right. The Three Lions did not wilt at the 2014 World Cup in Brazil because Ashley Cole was left out of the squad, but his absence was one of a myriad reasons for their struggles.

Leighton Baines was given the nod at left-back, and performed as well as anyone could have expected in his first appearance at a major tournament. England kept one clean sheet in three matches that summer as they exited in the group stage; that came in the only game Luke Shaw started.

Baines and Shaw were held as the present and future left-backs after the past – Cole – retired, and the former continued in the role even after the embarrassment of the World Cup. He retained his place in the starting line-up as far as March 2015, when he played the full 90 minutes against Lithuania. He hasn’t been called up since, jolting from first-team regular to not even a squad member with no transition period. It’s all a bit weird.

“I am still knocking on the door,” said Peter Crouch after scoring Stoke’s winner against Southampton last weekend. “I have not actually retired from international football so hopefully I have made an impact. I still feel fit and I want to start games but I am realistic.”

Sod realism when Jermain Defoe, 35 on Saturday, has been named in Gareth Southgate’s last four England squads. At 36, Crouch is still unfathomably scoring in the Premier League, but will almost certainly never enjoy the same international resurrection. Yet Crouch has nine goals in his last 20 league games (1,156 minutes), while Defoe has two in his last 20 (1,606 minutes).

In the post-war era, no player has scored more goals for England in a calendar year than….. Peter Crouch in 2006.

Crouch’s last England appearance came in November 2010 as an 85th-minute substitute against France; given just five minutes to impress, he obviously scored. Fraizer Campbell, Rickie Lambert, Jay Rodriguez, Danny Ings and Nathan Redmond have all made their Three Lions debut since, with Crouch being constantly overlooked. Keep knocking on that bloody door, Peter.

England only: Most expensive ever in cumulative fees

The England No 10 shirt has enjoyed and endured many owners throughout its history. Wayne Rooney, Dele Alli, Harry Kane, Steven Gerrard, Michael Owen, John Barnes and Gary Lineker have all carried the digits on their back along with the hope of an entire nation. The number adorned Geoff Hurst’s shirt when he helped England win the World Cup in 1966.

Andy Johnson, Shaun Wright-Phillips, Gabriel Agbonlahor and Stewart Downing would not normally be associated with such stellar figures of the international game, but all have had the honour of the No 10 bestowed upon them during their England careers.

So that’s the good and the bad, now for the ugly. It was Hodgson who gave Tom Cleverley the No 10 shirt during the admittedly low peak of his Manchester United powers. “I suppose you could say Tom Cleverley is an attacking midfield player – but he’s an attacking midfield player in the same way Cesc Fabregas is,” Hodgson said in September 2012, expertly building the midfielder up in preparation for the subsequent knocking down.

Two years later, Hodgson was forced to defend his man after a petition to exclude Cleverley from the 2014 World Cup squad reached 10,000 signatures. “That petition does not impress me, I must admit,” said the manager, who went on to name the “sensitive young man” on his standby list.

Since leaving United in 2015, Cleverley has meandered at Everton before quietly impressing with Watford. But when Gareth Southgate needed a central midfielder to replace the injured Fabian Delph earlier this week, he turned instead to Harry Winks. Poor Tom. Poor “sensitive” Tom.

“Maybe one day it will happen again,” said Ashley Young of his chances of an England recall in April 2017. He would bring versatility, experience and reliability, and has rekindled his best form under Jose Mourinho at Manchester United, yet he is barely even in the art gallery under Southgate, never mind in the picture.

The 32-year-old was one of seven players to feature for every minute of England’s limp to the Euro 2012 quarter-finals, missing a penalty against Italy in the crucial shoot-out in Ukraine. By March 2013 he had made his most recent international start, and in September of that year came his final appearance. The ship rather strangely appears to have sailed with barely more than a passing mention.

When Jon Flanagan sits down with his grandchildren and regales them with tales of his footballing career, he will have a few starting points for discussion. He will tell them of how Cafu once crowned him as “my successor”. He will tell them of how he scored his first Premier League goal against Tottenham, but probably omit the fact that he had an erection as a result. But he will get back on track by showing them his solitary England cap.

Flanagan has an erection over his goal hahahahaha pic.twitter.com/5jNUfxl5zT

The Liverpool full-back is unlikely to ever improve on his one international appearance, as a substitute in a friendly in the build-up to the 2014 World Cup. Flanagan was named on the standby list for that tournament, and can point to a long-term injury as the reason for his subsequent absence from the squad. Playing 11 Premier League games in the last three-and-a-half years probably hasn’t helped, mind.

At least Flanagan can suggest his only call-up was deserved, having played his part in Liverpool’s memorable 2013/14 season. Martin Kelly started 12 Premier League games as the Reds finished eighth in 2011/12, yet Hodgson was flashing up on his phone in the months before Euro 2012. Sorry for that mental image.

Kelly did not feature at the tournament, but did play in a friendly in the build-up. The two minutes he was afforded in a 1-0 win over Norway in May 2012 make his the shortest England career in history.

The right-back has since left Anfield, and has settled for a career of forcibly removing toys from prams after being told by Frank de Boer that he isn’t good enough. Hodgson replaced the Dutchman as manager at Crystal Palace, and has proceeded to continue his relationship with Kelly where he left off on the international scene; he has not played once in the Premier League under the 70-year-old.

Of the 23-man England squad that Sven-Göran Eriksson called upon for the 2006 World Cup, most have left the Premier League arena. Thirteen have retired, three play in the Championship, two ply their trade in the United States, one is a boxer, and one spends his time reminding people he is Sol Campbell.

Only five are still in the Premier League. Wayne Rooney jumped to international retirement before he was pushed, Theo Walcott is as much out of contention at Arsenal as he is at England, Crouch is already on this list and Michael Carrick fits the criteria too.

Then there is Aaron Lennon, who deserves immense credit for returning to first-team football this season. But he is still on the periphery at Everton, he is still unfathomably 30 years old, and he is still unlikely to ever add to his 21 England caps.

Forty-nine days. That’s how long it took Graeme Souness to go from describing Jonjo Shelvey as a “clown” to tentatively touting him for an England recall. “That should be his last chance because you can’t do that,” said the Scot in August after the Newcastle captain was sent off for a stamp on Dele Alli. “How stupid is that?”

By the beginning of October, Souness had changed his tune ever so slightly. “I’m going to say something daft but if he got his act together there would be a shout for him to get back into the England squad,” he said after Newcastle’s draw with Liverpool, with the midfielder impressing against his former side.

There was a time when the idea of international honours for Shelvey did not seem so “daft”. The 25-year-old earned cap one in 2012, and caps two through six three years later. One would expect an England recall to be on the distant horizon, but Southgate’s decision to turn to Winks instead of Shelvey when he needed a midfielder in midweek was telling.

Andros Townsend (May 2016) was the most recent player to receive an England cap while at Newcastle; Andy Carroll (March 2010) is next on that list. The current captain has as good a chance as anyone of breaking that run, but he is not in the manager’s thoughts right now.