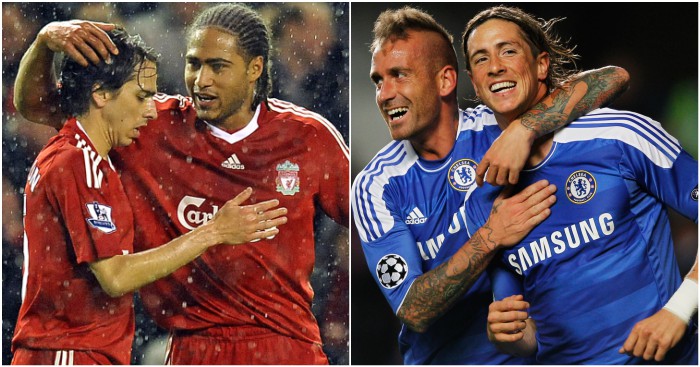 Mo Salah is flying at Liverpool having failed at Chelsea, but what about those who have gone before him? Which club has done the best out of these big names?

Meireles won the PFA Fans Player of the Year award in 2011 – really – after a splendid first season at Liverpool following his arrival in August 2010 from Porto for £11.5million. Like everyone else, he shone more under Kenny Dalglish than Roy Hodgson, so much so that Chelsea came calling the following summer.

Liverpool only made a modest profit on the Portugal midfielder, who handed in a transfer request to force through a deadline day move after the Reds had reportedly failed to fulfill a promise involving a hefty payrise. He only did a year too at Stamford Bridge, but he finished the season a Champions League winner, even though he was ruled out of the final due to suspension. Two seasons after he arrived, two clubs and four managers later, Meireles was off again, to Fenerbahce.

Few could understand why Chelsea were willing to allow Cole to leave on a free in 2010 after seven seasons and three Premier League titles. He had shown glimpses of the genius many thought he posssessed as a youngster and, according to some, all he needed was to be trusted with a regular start.

Liverpool secured at the time what was considered a pretty major coup and signed Cole on a four-year contract and gave him £90,000 a week. Then we saw why Chelsea were happy to get shot. Cole’s international career ended that summer when England were battered by Germany at the World Cup and it was all downhill from there. He was sent off on his Premier League debut for the Reds before missing a penalty in his second appearance. Cole was shipped out to Lille on loan for a year before Brendan Rodgers gave him a chance in 2012. Half a season later, with a year remaining on his initial Liverpool contract, he was given to West Ham.

It took us by surprise that Torres made more appearances in blue than red. The Spain striker spent three and a half seasons at both clubs and though he enjoyed more success at Chelsea, during his time at Liverpool, Torres was one of the best centre-forwards the Premier League has seen.

Only during his first season at Anfield, in which he scored 24 goals in 33 Premier League appearances, did he manage to stay fit, missing only four games and each was in isolation. The following two campaigns were persistently interrupted and, unfortunately for Liverpool, his return to fitness coincided with Hodgson’s arrival. With Chelsea in need of a striker and Torres up for a change of scene, Liverpool accepted a British record bid of £50million.

It appeared to be shrewd business when Torres took 903 minutes to score his first Chelsea goal. After then, he was on and off the bench and didn’t manage double figures in the Premier League during his stay at Stamford Bridge. He won the only major club titles of his career at Chelsea, however, so it wasn’t a complete waste.

The France striker says not joining Liverpool permanently after six months on loan is “the only one regret in my career”. After five goals during the second half of 2001-02, Gerard Houllier instead put his faith in El Hadji Diouf, which the coach no doubt sees as one of his biggest regrets too.

Anelka then drifted from Manchester City to Fenerbahce and then on to Bolton where Big Sam sold him on the idea of catching the eyes of big clubs once more. A haul of 21 goals in a season and a half for the Trotters tempted Chelsea, where he then rebuilt his reputation as a top-class striker alongside Didier Drogba.

The prodigious striker was lured by Chelsea to walk away from Manchester City in 2009, but Sturridge had to be more patient than he would have liked. He scored only one goal before he was shipped out on loan to Bolton for some first-team experience. But 11 Premier League goals in 30 appearances upon his return failed to convince Chelsea, who were prepared to allow Sturridge to join Liverpool for £12million in 2012.

Sturridge immediately set about proving Chelsea wrong and he almost did it with a title winner’s medal in his first full campaign. Thirty-one goals in 43 Premier League appearances suggested Liverpool had got themselves a bargain, but only 15 goals and 47 matches missed through injury in the three full seasons that followed has seen pretty much everyone write him off as a Reds striker.

Johnson was still a teenager when he became the first signing of the Roman Abramovich era, moving from West Ham for £6million. It was perhaps too much too soon, especially when Jose Mourinho arrived a year later. Johnson was sent to Portsmouth on loan in 2006 and Johnson began again to show the promise he had prior to joining Chelsea.

Two subsequent seasons at Pompey after signing permanently in 2007 saw Johnson win a regular England spot and tempted Chelsea into bidding again for the player they got rid of two years previously. Johnson, though, opted for Liverpool, where he was to spend six seasons, the vast majority of which he was an automatic choice.

The Nigeria international has made a success of his career at Chelsea, though he certainly took his sweet time about it. A few eyebrows were raised when the then Champions League winners paid £9million to Wigan in 2012, and those pessimists appeared to be proved right when the Blues sanctioned a loan move to Liverpool a year later.

Moses struggled to impress there too but he nearly became a title winner during a temporary move that never looked like being extended. Spells at Stoke and West Ham did little to encourage anyone that Moses could one day become a Chelsea regular. But then Antonio Conte found him hanging around Cobham when he was looking for a right wing-back, and from then on he was one of the first names on the Blues’ team-sheet on the way to an unlikely title triumph.

Benayoun made a solid contribution for Liverpool after signing from West Ham in 2007 but that apparently wasn’t enough for some people. “Everyone asks me why I left Liverpool,” said Benayoun not long after exiting in 2010. “There is only one reason: Rafa Benitez.”

“He tried to destroy my confidence. You can’t treat a player like this and expect him to be happy. Benitez tried to break me like he broke Riera.” Poor Albert.

Luckily for Benayoun, Chelsea were willing to offer him an escape, though he now had no Rafa to worry about, he also had very little game time. He managed 14 league appearances in three years, with a year on loan at Arsenal sandwiched in the middle.