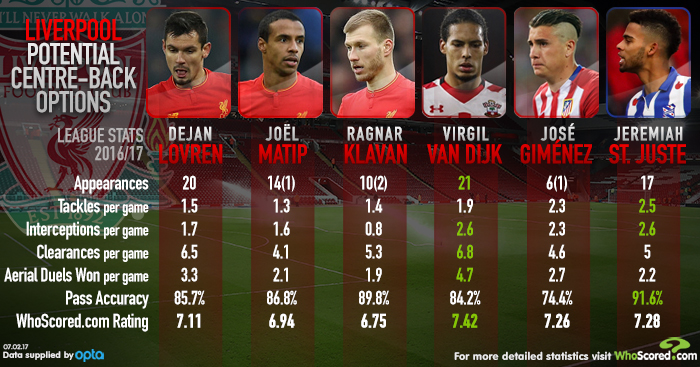 It was another weekend to forget for Liverpool as they fell to a 2-0 loss at Hull. The Reds are yet to win a Premier League game in 2017 and have won just once in all competitions this calendar year, that coming in an FA Cup replay with Plymouth. While Jurgen Klopp is unlikely to receive his marching orders any time soon, the German needs to bolster the squad in the summer.

Here, WhoScored.com pick out a number of players Liverpool could sign at the end of the season to improve the squad…

Jordan Pickford – Sunderland (WhoScored.com Rating 7.07)
Simon Mignolet’s error on Saturday will have hardly instilled confidence in Klopp and with Loris Karius waiting in the wings, the Belgian could be about to lose his first-team spot to the young German for the second time this season. Karius has done little to suggest he deserves a regular start role in his sporadic outings, however, which could convince Klopp to delve into the transfer market for a new shot-stopper. Jordan Pickford earned rave reviews for his Sunderland showings prior to injury, prompting reports linking him with a move away from the Stadium of Light.

No goalkeeper to make 10 or more appearances this season is claiming more crosses per game than Pickford (1.8) in Europe’s top five leagues this season, while a 71.6% save success rate is also an impressive return for a Sunderland side mired in the relegation zone. If the Black Cats drop into the Championship, there is likely to be a transfer scramble for the 22-year-old and it could be in Liverpool’s best interest to move for Pickford should he become available.

Joe Hart – Torino (6.77)
Klopp has regularly denied links with the on-loan shot-stopper, but Joe Hart remains a rumoured target for Liverpool, set to intensify following Mignolet’s sloppy showing at the KCOM Stadium. The England number one is currently on loan at Serie A side Torino, and a permanent exit from City is likely with a number of Premier League teams understandably keen on Hart.

The 29-year-old has a modest save success rate of 68.6% in Serie A this season, and his lack of concentration often rears its ugly head. Only Josip Posavec (7) and Ciprian Tatrusanu (5) have committed more errors that have led to an opposition shot than Hart (3) in Italy’s top tier this term, two of which have resulted in goals. Liverpool would be keen to bring in a goalkeeper that is not so error-prone if they look to replace Mignolet and Karius, but Hart’s top-flight experience would be a boost.

Stephane Ruffier – Saint-Etienne (7.34)
It’s somewhat surprising to think that Stephane Ruffier hasn’t been linked with a number of top teams on the continent. The 30-year-old has been a consistent presence between the Saint-Etienne sticks following his arrival in 2011, missing just six Ligue 1 games since his move from Monaco. Ruffier only extended his contract with the French outfit in November, so they are under no pressure to cash in on the France international, but he remains a goalkeeper that should interest any top team in Europe.

Indeed, his save success rate (80.8%) is the third best in Europe’s top five leagues this season of those to make 10 or more appearances, while his WhoScored.com rating (7.34) is enough to feature in the current European team of the season. He has kept seven clean sheets in his 17 league appearances and Saint-Etienne would fight tooth and nail to retain his services. At his age, Ruffier is coming to the peak of his goalkeeping career and Liverpool would do well to take him on if they can convince Saint-Etienne to sell, with an experienced number one perhaps what is required.

Virgil van Dijk – Southampton (7.42)
Southampton were rocked by the news Virgil van Dijk would be sidelined for up to three months with an ankle injury sustained last month, yet it proved to be something of a blessing with the Saints able to retain the Dutchman’s services as a result. Jose Fonte’s departure for West Ham further strengthened their resolve to keep hold of their asset and wait until the summer to find a replacement should Van Dijk be sold. The path from Southampton to Liverpool is a well-trodden one and you wouldn’t put it past the Reds to return to the south coast for Van Dijk this summer.

Interest is likely to be high in the 25-year-old, whose WhoScored.com rating (7.42) is enough to feature in the current Premier League team of the season. He’s a capable performer with the ball at his feet having mustered a 84.2% pass success rate from 46.7 passes per league game this season, while his aerial dominance means he is winning 4.7 of 6.2 aerial duels contested per league match. Given Matip’s standing, a centre-back partnership of him and Van Dijk would certainly appeal to Liverpool, and more importantly significantly bolster a weak spot within the squad.

Gimenez – Atletico Madrid (7.26)
Having played such a key role in Atletico Madrid’s progression to the Champions League final, a lack of playing time will be a concern for Gimenez, who is approaching the final year of his contract with the La Liga giants. Very much at a crossroads in his career, the Uruguayan is a defender who would attract ample interest across the continent should Atletico cash in on the youngster rather than risk losing him on a free next summer.

Having made just six league starts this term, the 22-year-old may feel his time is better served elsewhere and with Liverpool requiring another centre-back, they could do a lot worse than pursue Gimenez. 3.2 tackles per 90 this season is an excellent return, while 6.4 clearances per 90 highlights a knack of being in the right place at the right time. His game would need to adapt at Liverpool, however, with 35.7 passes per game significantly less than first choice centre-backs Joel Matip (60.6) and Dejan Lovren (69.2), while a pass success rate of 74.4% is disappointing. At his age, though, it’s an area that can be improved upon.

Jerry St. Juste – Heerenveen (7.28)
There is no denying that the Netherlands is a hotbed of young talent and the latest centre-back off the conveyer belt is the prodigious Jerry St. Juste. The Heerenveen defender is very much a diamond in the rough, but with the right guidance this jewel could glisten, there’s no question about that. The Dutchman has impressed in the Eredivisie this season, earning a WhoScored.com rating of 7.28, playing a key role for a side that has conceded just 25 league goals this season. What’s vital, though, is his impressive ability to pick out a teammate.

The Reds have developed statistically calculated WhoScored.com styles of play of ‘possession football’ and ‘short passes’, two areas where St. Juste excels. He’s completed 91.6% of his average of 58.2 passes in the Eredivisie this season, with his ability to play the ball out from the back an essential trait for the modern-day centre-back. Plus, 2.5 tackles and 2.6 interceptions per game are both respectable returns as St. Juste is capable of robbing the opposition of possession, while his reading of the game belies his age. At 20 years old, there is much more to come from St. Juste, who has the makings of becoming one of the best in his position on the continent.

Benjamin Mendy – Monaco (7.28)
As solid as James Milner has been at left-back for Liverpool, there’s perhaps a need for a specialist in the position at Anfield. Klopp demands his full-backs provide width in his favoured 4-3-3 formation to overlap the attackers, who often cut infield to help confuse opposition defences. Benjamin Mendy has provided this offensive outlet from deep with aplomb following his summer arrival at Monaco from Marseille. Five assists in the league and Champions League is a respectable return for the France U21 international, who has played the third most crosses from open play (100) in Ligue 1 this season.

2.2 tackles and 2.1 interceptions per game are also respectable returns for Mendy, who can win the ball himself before instigating attacks down the left. Considering Monaco are flying in Ligue 1 this term, it remains to be seen whether they would be willing to sell the left-back at the end of the season, undoubtedly earning a handsome profit, or if Mendy favours a move to England. It would cost a fair bit for Liverpool to convince their French counterparts to sell and with cheaper options available, the Reds could do worse than turn their attention to Germany, which brings us nicely onto the next left-back option…

Sead Kolasinac – Schalke (7.48)
While it’s rumoured Juventus have a deal in place to sign Sead Kolasinac, nothing is confirmed and with his contract expiring in the summer, Liverpool could do a lot worse than strive to sign the Bosnia-Herzegovina international. The youngster has endured his fair share of injury issues having missed much of the 2014/15 season, but he’s been back to his best for Schalke this term, albeit in a more advanced role. Schalke have routinely implemented a three-man defence, with Kolasinac pushed forward to maximise his attacking qualities.

Only Fernando Marcal (6) has registered more assists than Kolasinac (4) of defenders in Europe’s top five leagues this season as he the latter helps stretch opposition defences. His reading of the game, though, is a boost, with only Thiago Alcantara (4.4) and Benedikt Howedes (4.2) averaging more interceptions per game than the 23-year-old (4.1) on the continent, reinforcing a statistically calculated WhoScored.com strength of ‘defensive contribution’. His versatility on the left is a bonus, but with his contract coming to an end once the season finishes, Liverpool would have to act swiftly to secure his services, particularly with rivals Chelsea also showing an interest.