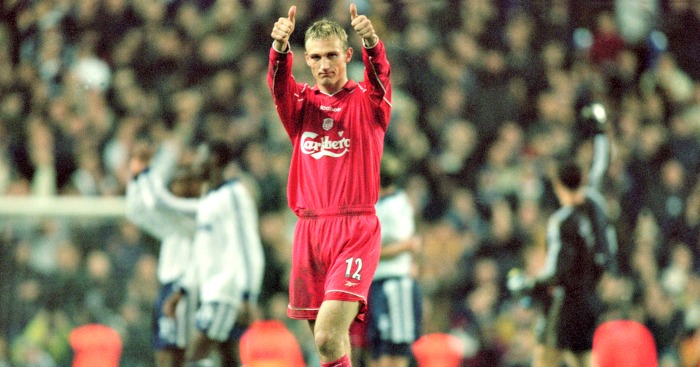 The rules are simple: Each individual must have only ever been nominated for one Ballon d’Or and, regardless of whether they deserved it at the time, it must look a little bit weird in the current day. Just to reiterate: I’m not saying they were or are sh*te, just that it looks weird. Like how bizarre it will be in 2036, finding out that Jamie Vardy won the bloody thing 20 years ago.

“It’s not too late,” said Mario Balotelli with regards to his hopes of winning the Ballon d’Or. He was speaking last summer. “I think I could have already won it by now,” he added, “but by working hard in training I could still win it in the next two or three years”.

At 26, and fighting to salvage his career, Balotelli will have to work awfully hard in training at Nice to earn that chance. There is no doubt the Italian has the talent for it however, as his nomination for the 2012 Ballon d’Or proved. Fresh from his exploits for Italy at Euro 2012 and his Premier League title-winning assist for Manchester City’s Sergio Aguero, the then-22-year-old placed 23rd out of 23 in that year’s voting. He received 0.07% of the votes, with winner Lionel Messi picking up a paltry 41.60%.

Nani
An individual regularly discussed in terms of untapped potential and wasted talent, it is easy to forget that Nani was once one of Manchester United’s finest players. If only for one calendar year, the Portuguese showed the briefest glimpse of an ability to step out of Cristiano Ronaldo’s shadow.

Nani never possessed the same quality of his compatriot, but then again, few ever have. Yet he was truly devastating for United in 2011, providing pace and trickery from the wing as Sir Alex Ferguson led his side to a Premier League title and Champions League final. They would lose that to Barcelona, but there was no shame in losing to one of the greatest club sides ever assembled.

Still just 29, Nani’s record across the 2010/11 and 2011/12 Premier League seasons was quite wondrous, the Portuguese scoring 17 goals and assisting a further 24 in 62 games. His form warranted a placing of 22nd out of 23 at the 2011 Ballon d’Or, with Gerard Pique propping up that particular table. What’s funnier is that Scott Parker was voted Premier League Player of the Year, while Nani was not even nominated for the award.

Asamoah Gyan
It looks ridiculous now, the name of Asamoah Gyan sitting above those of Philipp Lahm, Dani Alves and Cesc Fabregas. Of course, it was only natural that the man who carried the hopes of a continent on his shoulders for so long would place so high in the voting for the 2010 Ballon d’Or. Gyan’s three goals propelled Ghana to the brink of history at that year’s World Cup, before Luis Suarez, a crossbar, and a subsequent exit in a penalty shoot-out to Uruguay brought an abrupt end to the dream.

Coming 18th in his only appearance in the voting for the world’s best player was perhaps scant consolation considering might could have been. That he was playing for Sunderland – Steve Bruce’s Sunderland – at the time only makes it more bizarre.

Edin Dzeko
Do you remember Felix Magath? The bloke with the glasses and the cheese? Well, a few years ago he assembled one of the most fearsome attacking teams in Europe. The guy who helped consign Fulham to Premier League relegation delivered the Bundesliga title to Wolfsburg.

Behind his remarkable success was a rather fearsome strikeforce. On one side was Grafite, who plundered 35 goals in 31 games in all competitions. He was not nominated for the 2009 Ballon d’Or. On the other was Edin Dzeko, who scored 36 goals in 42 games. He was. And he finished 13th, which was a bloody good effort.

Yuri Zhirkov
Chelsea fans must have rejoiced when they signed Yuri Zhirkov in the summer of 2009. The left-back had helped guide Russia to the semi-finals of Euro 2008 just a year beforehand, and was only a few months removed from a nomination for that year’s Ballon d’Or. He did not register a single vote, but still, at £18million, the most expensive Russian player of all time was a bargain in the making.

Somehow, Zhirkov was never again nominated for any such award. His incredible form at Chelsea was overlooked, with the politics of the football world favouring Lionel Messi and Cristiano Ronaldo. Yuri was robbed.

The above is a short collection of the players Freddie Kanoute officially outperformed in 2007. His 43 goals in 144 Premier League appearances for West Ham and Tottenham was a mere precursor to his form for Sevilla, for whom he scored 36 goals in 62 La Liga games over 2006/07 to 2007/08. The Spanish side would win back-to-back UEFA Cups in that sequence, as well as a UEFA Super Cup, a Copa del Rey and a Supercopa de Espana. And it was all Freddie’s doing.

William Gallas
Willy G’s 2006 began with an assist in Chelsea’s 2-1 win over Sunderland. From there, it took in appearances at right-back, centre-half and left-back – has there ever been a more effective and versatile defender in the modern day? – goals against Liverpool, Tottenham, West Ham and Manchester United, a Premier League title at Stamford Bridge, a runners-up medal with France at the World Cup, demands to leave Chelsea which included allegedly threatening to score own goals and a subsequent transfer to Arsenal, where he replaced Dennis Bergkamp as the club’s No 10.

A rather busy year culminated in a nomination for the Ballon d’Or, for which he unfortunately did not receive a single vote.

Sami Hyypia
After helping Liverpool win the most famous treble ever won by any English club ever with absolutely no exceptions at all, Sami Hyypia’s nomination for the 2001 Ballon d’Or was very much deserved. The centre-half was one of three representatives for Gerard Houllier’s side on the 47-man shortlist for the award, the Finland international a beautiful filling in a Michael Owen and Steven Gerrard sandwich. Which actually sounds like a terrible, terrible sandwich.

He would never again be nominated for the Ballon d’Or after Finnishing (hahahaha) joint-18th, alongside an eclectic selection of Roberto Carlos and Ebbe Sand.

As an aside, did you know that Paul Scholes has received the most Ballon d’Or nominations without ever receiving a single vote? He was up for the award in 2000, 2001, 2003, 2004 and 2007, but still has as many actual votes as Eric Djemba-Djemba. So there.