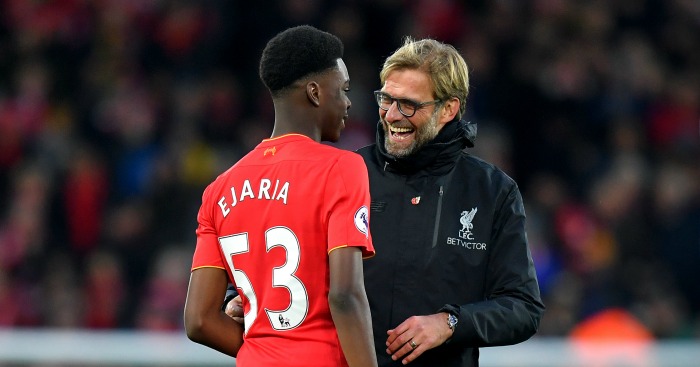 New Rangers recruit Ovie Ejaria hopes to use his Ibrox loan switch as a springboard to the Liverpool first-team.

Gers boss Steven Gerrard’s Liverpool links have paid off after he clinched a year-long loan swoop for the midfielder.

The 20-year-old Reds youngster has agreed to the move after penning a new “long-term” contract at Anfield.

And the England youth international hopes to use his time in Glasgow to prove to Reds boss Jurgen Klopp he is ready to become a Premier League star.

“It’s a massive club, the club’s doing really well at the moment, so it wasn’t a hard decision at all.

“I’m just going to keep working hard and see where that takes me.

“I really want to be a regular at Liverpool Football Club, a massive club, so that’s my aim.”

Ejaria – who spent the second half of last season on loan at Sunderland – becomes Gers’ fourth signing of the summer following moves for Scott Arfield and Allan McGregor plus the permanent deal for former loan recruit Jamie Murphy.

Gerrard is also hoping to complete a £3million move for Brighton defender Connor Goldson in the coming days.

Ejaria was part of the England Under-20 squad which lifted the FIFA Youth World Cup last year and the midfield playmaker is highly rated by Liverpool chiefs.

Although he was too old to feature for Gerrard’s Under-18s squad last season, the former Anfield skipper has been well aware of Ejaria’s qualities since he broke into the Merseyside giants’ first team in 2016.

Signed from Arsenal’s youth ranks in 2014, Ejaria has clocked up eight first-team appearances for Liverpool so far and featured 11 times for Sunderland during their doomed fight against relegation from the Sky Bet Championship last term.