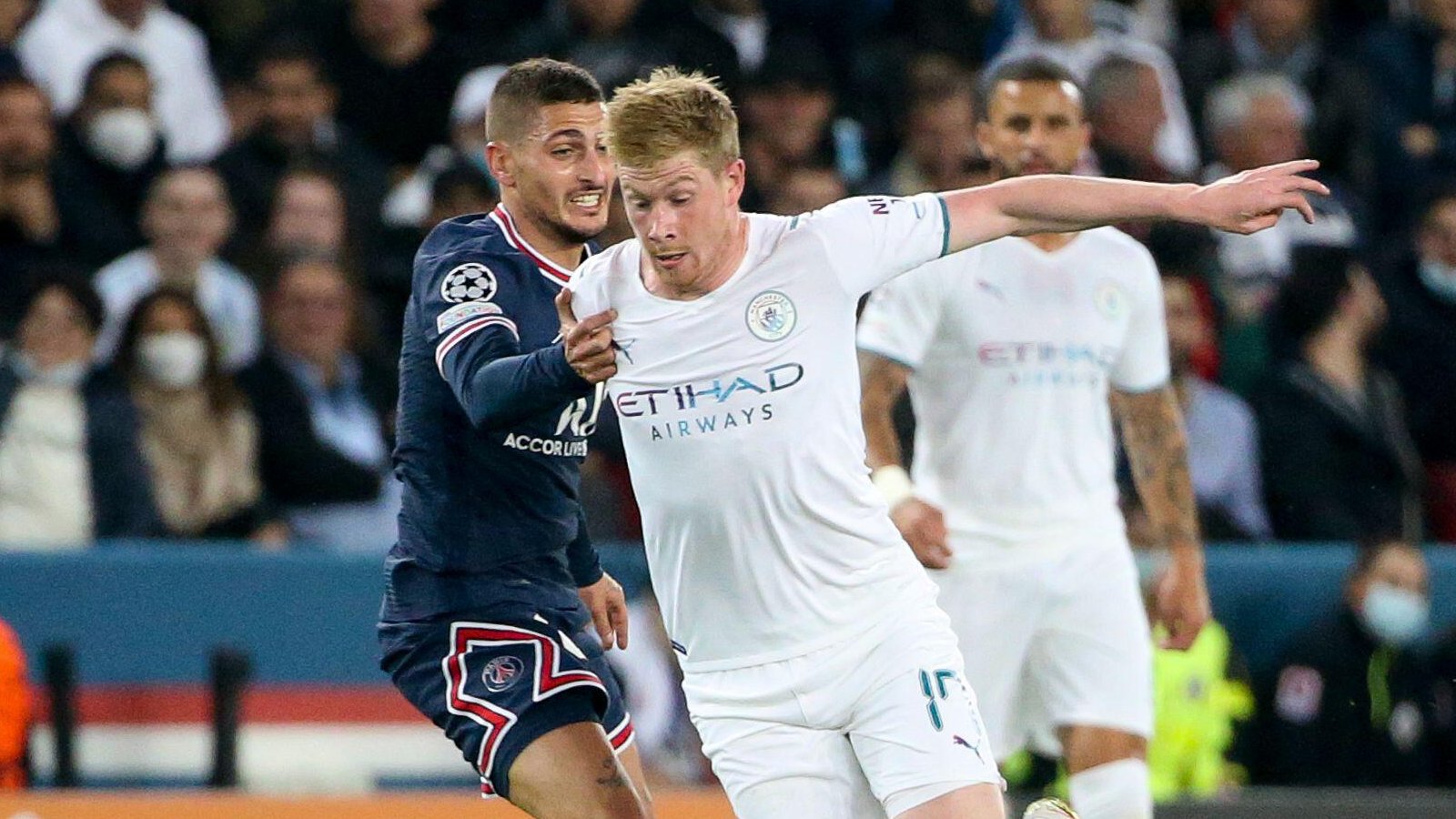 Some of this lot have already probably accepted it just isn’t going to happen. The European ship has sailed for four Manchester City players.

The following lot have never won and will never win the Champions League. Players must have made an appearance in this season’s competition to qualify, which is the only thing that spares Harry Kane.

GOALKEEPER: Jan Oblak
Over the course of eight Champions League seasons, Jan Oblak has managed to exit the competition at every possible stage. He and Atletico Madrid tumbled out of the groups in 2017/18, have been knocked out in the last 16 by Juventus (2019) and Chelsea (2021), stumbled in the quarter-finals to Real Madrid (2015), Leipzig (2020) and Manchester City (2022) and fell at both the semi and final hurdles to Real again in 2017 and 2016 respectively. The keeper has league titles and domestic cups in Portugal and Spain, as well as a Europa League and Super Cup to show for his efforts over more than half a decade as one of the continent’s best shot-stoppers. Even with his powers on the wane, 31 clean sheets in 69 European Cup games is an enviable record that never seems likely to be adorned with a winner’s medal.

RIGHT-BACK: Kyle Walker
It was under Harry Redknapp and against Hearts that Kyle Walker made his debut in European competition. The tactical guidance is a little more specific and the stage far grander, but over a decade later, both Mauricio Pochettino and Pep Guardiola have proven incapable of helping the right-back fulfil his ultimate potential. “I’ll get killed for saying this but I’d still probably say the Premier League,” Walker replied when asked whether he’d rather another title or a first Champions League in April. The rogue option c) of neither remains a possibility but at 31 and ensconced firmly in the plans of a manager and club cursed by Yaya Toure’s agent, that ship is sailing into the distance.

What happens next: How Manchester City responded to previous Champions League exits

CENTRE-BACK: Giorgio Chiellini
“It’s the history of the Tottenham,” was the deadpan assessment of Giorgio Chiellini after Juventus stunned Wembley with two goals in three second-half minutes to advance to the 2018 Champions League quarter-finals at the north London club’s expense. The centre-half explained that Spurs “miss always something to arrive at the end” and “we believe in history”. His own shows a pair of runners-up medals from chastening final defeats. Arsenal, Porto, Galatasaray and Bordeaux are among the clubs to have dumped Chiellini’s Juventus out of Europe; a reported summer departure after 18 years in Turin means the history of the Italian is unlikely to ever change.

CENTRE-BACK: Mats Hummels
A once bright star is finally fading, to the point that Dortmund have already agreed long-term deals to sign 26-year-old Nicklas Sule and Nico Schlotterbeck, 22, in the summer. Mats Hummels remains useful but any centre-half partnership that involves the 33-year-old and Emre Can does not. Those two Champions League group stage fixtures against Ajax and Sebastien Haller in the winter thoroughly underlined the Germany international’s increasing lack of relevance at the elite level. Those heights of 2013 will never be reached again and it must still sting somewhat that Hummels sold his soul to the Bayern devil and requested a refund in the pre-season before they lifted the famous trophy.

LEFT-BACK: Aymeric Laporte
It is not yet known whether Aymeric Laporte will have to retire from the mortal wounds inflicted upon him by Luka Modric at the Santiago Bernabeu. In any instance, it seems as though the centre-half will simply never add the European Cup to his burgeoning collection of honours. Laporte sat on the bench alongside Scott Carson and friends for the 2021 final and has first-hand experience of some classic overthinking, such as being deployed at left-back to deal with Mo Salah and marshalling a three-man defence against Lyon. Neither ended particularly well for him or Manchester City.

RIGHT WINGER: Riyad Mahrez
The scorer of four of Manchester City’s nine European Cup semi-final goals. Leicester netted 11 times in their only Champions League campaign ever and Riyad Mahrez was directly responsible for six of them. “City have ambition to go further than the Champions League quarter-finals like they did last season,” he said upon swapping one shade of blue for another in 2018. “I made the decision to come here because I want to be part of that. The Champions League is for big clubs. They’re a big club, they have everything to try to win it. Pep is a big manager – he’s won a lot of things and made history with this club. I’ll give my best to achieve for the club.” And he absolutely has, but the 32-year-old has lacked that bit of help when it matters most.

Back in September 2016, Riyad Mahrez made his Champions League debut against Club Brugge while at Leicester 🦊

This free kick proved that there was plenty more to come 📈#UCL pic.twitter.com/1YMIZiChJt

CENTRAL MIDFIELDER: Kevin De Bruyne
Making a less public declaration of Champions League intent was Kevin De Bruyne, whose contract extension in April 2021 led to some inside knowledge of the negotiations. As Paul Hirst of The Times wrote: ‘During talks with Txiki Begiristain, City’s director of football, De Bruyne made it clear that he wanted to win the Champions League and he was assured that signings would be made to help to realise that aim.’ The club have since shattered their transfer record for Jack Grealish and discovered fascinating ways to slip up on their supposedly predetermined path to the holy grail.

CENTRAL MIDFIELDER: Marco Verratti
No player has won more titles in the history of Ligue Un but Marco Verratti might consider trading those eight championships with Paris Saint-Germain for a single Champions League. It perhaps pains the midfielder further that he played only 25 minutes of the 2020 final defeat to Bayern Munich, by which stage Kingsley Coman’s decisive goal had already been scored. Verratti turns 30 this year and has two more seasons remaining on his Parc des Princes contract. One of the most inherently gifted midfielders of his generation is about to be surpassed by a new breed of more dynamic and rounded players in his position.

LEFT WINGER: Antoine Griezmann
The Champions League is woven into the fabric of Antoine Griezmann’s career. The Frenchman scored both second-leg goals as Atletico Madrid overturned a 2-1 quarter-final deficit against Barcelona in 2016. In the semi-final of that same season, it was his away goal that felled Bayern Munich. And although Griezmann missed a penalty to equalise in the final versus Real Madrid, he netted in the subsequent shootout defeat. He has scored in the competition against Chelsea, Leicester and Liverpool and his first ever goal for Atletico came in a group stage loss at Olympiacos. The poor fella even moved to Barcelona in an attempt to complete his CV but was rewarded with the Bayern Munich 8-2 and a couple of humbling lessons from PSG and Kylian Mbappe.

CENTRE-FORWARD: Zlatan Ibrahimovic
Nine players have scored more European Cup goals since the tournament’s inception, but each of those have lifted the trophy at least once. Zlatan Ibrahimovic has shared his 48 strikes across 124 games and between six former winners – Ajax, Juventus, Inter Milan, Barcelona, AC Milan and Manchester United – as well as Paris Saint-Germain. The Swede has quite impressively been knocked out by Liverpool, Arsenal, Manchester United, Tottenham, Chelsea and Manchester City, with the 40-year-old only reaching as far as the Champions League semi-finals once. That was for Barcelona in 2010, when the club he left to join the Catalans the previous summer, Inter Milan, thwarted Pep Guardiola’s side. It’s probably time to give up the chase.

CENTRE-FORWARD: Edinson Cavani
An unlucky 13 goals behind Ibrahimovic and next on that list of highest European Cup scorers without ever winning the competition, Edinson Cavani last netted in the knockouts in 2018. His only Champions League campaign with Napoli ended at the hands of eventual winners Chelsea, while the Uruguayan followed up three consecutive quarter-final exits at PSG by losing three successive last-16 ties with the French club. His last season there technically ended with a runners-up medal but Cavani was omitted from the squad for the 2020 quarters, semis and final. Manchester United, surprisingly enough, have not helped deliver that elusive glory.