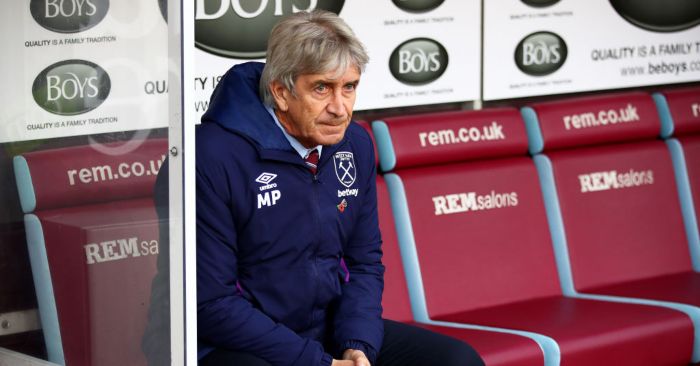 When a player’s form dips, it’s obvious to all: passes go awry, shots miss badly, tackles fail to tackle, and so on. Moreover, form can drop drastically in a fairly short time, and it sometimes never quite comes back.

If it can happen to players, there’s no reason it can’t happen to managers. Case in point: Mark Hughes. In about a year he went from a perfectly capable Premier League manager to a laughing stock. He’s unlikely ever to regain his former stature.

But if it’s easy to see when players lose their form, it’s not so easy with managers. That’s because we’re not always sure how well managers are doing. Their overall job is to get the team in the best possible form – but when a team is playing badly, maybe it’s just their true level, or the players are for some reason unmanageable. It can take a year or more to surmise that a good manager has gone bad, and even then it may be a case of the man not fitting the club.

It’s particularly difficult when that club is West Ham United, known for weirdness on and off the pitch, and a persistent failure to live up to their potential. The initial reaction isn’t to blame the manager first.

Still, like Sarah Winterburn, I’m beginning to wonder about Pellegrini. The early years of his CV were excellent, and he earned his reputation. He worked wonders at Villarreal and Málaga, taking both clubs into Europe, and could be excused for finishing three points behind Pep’s Barcelona in his one year at Real Madrid.

He then won the Premier League on his first try at Manchester City, an achievement that shouldn’t be underestimated for a moment. That year saw Luis Suárez go bonkers at Liverpool, and José Mourinho return to Chelsea. City saw them both off in a punishing three-way title race, finishing with 102 goals and a goal difference 14 better than the second-placed Reds.

The next year it was Mourinho’s turn to win the title, with City a respectable second, and then came Leicester City’s miracle season. Pellegrini departed with dignity, knowing that the job had been promised to Guardiola. No-one thought of him as anything other than a quality manager.

You’d have figured his next job to be a strong Spanish or Italian club, maybe even PSG. But he went to China, recruited by newly-promoted Hebei China Fortune to get them closer to perennial champions Guangzhou Evergrande. In his second year, he had Hebei in third place for a while, which would have been good enough for Asian Champions League qualification, but they faded in the stretch. His contract was not renewed.

And so to West Ham United, with owners finally willing to splash the cash. In his first year they finished a respectable 10th, although they got there by a rather unrespectable path. They could be brilliant one match and dire the next, with absolutely no discernible pattern. At one point they went 19 matches without consecutive wins. They played attacking football, in Pellegrini’s usual manner, but had to be saved time and again by Lukasz Fabianski, having the greatest season of his career.

Once more unto the breach, then, and after six weeks of this season West Ham were in fifth place – but the discerning might have noted that the Hammers’ wins came over Watford, Norwich City and a dire Manchester United. Still, this was Pellegrini, wasn’t it? Thereupon ensued three losses in four, to Crystal Palace, Everton and Newcastle. Performance levels had seemingly bottomed out.

What all this led up to was Saturday’s game at Burnley. Here, if ever, one expected a good performance from the Hammers. For one thing, they must have wanted revenge for last year’s fiasco at Turf Moor. That afternoon they were utterly pasted by the Clarets, with Ashley Barnes and Chris Wood humiliatingly free in the box and Ashley Westwood looking like Kevin de Bruyne on a good day. Getting back to this season, West Ham had looked so bad the previous week at St. James’ Park that the manager had to be expecting a response, as the saying goes.

And he got one – for about five minutes. Unfortunately, Burnley had also delivered a stinker the previous week, and Sean Dyche was equally expecting a response. But when Dyche expects one, he gets one, and it lasts the whole match. Burnley were so dominant that at half-time West Ham had zero shots on target – wait, make that zero shots period. Meanwhile Barnes had scored from a set-piece, Wood had a goal VARred out by the tiniest of margins, and then just scored a few minutes later anyway.

All wasn’t lost yet. West Ham had shown a bit of life in the last 15 minutes of the half, even reaching the attacking third now and then. So it wasn’t a surprise when they came out strong after the interval. Sébastien Haller actually took a shot, too – from outside the area, but still a shot. Alas, a few minutes later Roberto submitted his nomination for the Comedy.co.uk Awards, and from then on it was target practice for Burnley. Roberto recovered sufficiently to make three excellent saves from Wood, which made the scoreline an only moderately embarrassing 3-0.

A late flurry of Hammers shots made the stats less embarrassing too, but the side had been thoroughly rinsed. More than half their xG had come from one chance in the 84th minute, with the game long gone. And measured purely by xG, it was only a fraction behind their opening-day 5-0 loss to Manchester City.

When Burnley stuff you by City margins, you haven’t quite responded as you should.

In fact, you have to say West Ham haven’t responded to Pellegrini at all this season. There are some decent players in the side: Felipe Anderson, Andriy Yarmolenko, Declan Rice, Haller, Issa Diop. But if ever a team were less than the sum of its parts, it’s West Ham.

The midfield of Rice and Mark Noble is as inadequate as you’d expect. The back line, unprotected, fails time and again. Anderson, after a superb first half of last season, looks largely uninterested. You pick your own metaphor for how isolated Haller has been: Winty went with Brexit, I was thinking Pluto. Oh, and here’s a fun stat. West Ham are an attacking side, right? Full-backs are supposed to be a part of that, right? In the 79th minute against Burnley, Aaron Cresswell delivered a key pass – his very first of the season, in his 613th minute of play.

The shot was blocked.

Of course, it’s not Pellegrini’s fault that Fabianski got hurt, or that Roberto only excels until after he’s given away a goal or two. But if I may be permitted one more reference to expected goals, a stat which is unaffected by who’s between the sticks: West Ham’s xGA is 19th in the league, ahead only of Norwich City. They’re behind Southampton, for goodness sake. It’s starting to look like relegation form in the table, too. Thirteen points from 12 matches, without having played Liverpool, Chelsea, and Leicester City, or even Wolves, Spurs and Arsenal.

So it’s time to wonder if the problem isn’t West Ham United, but Manuel Pellegrini. Sixty-six isn’t all that old (it better not be, since I’m only two years younger). But after several impressive years in Spain, and a title in England, you don’t go to China if you’re still psychologically ready for top-level managing. It’s a frighteningly intense job, and Pellegrini may just not have the fire any more.

That’s OK, unless you’re a West Ham supporter. The way the teams below them are playing, the Hammers probably won’t go down. But you wouldn’t pick them to finish 10th again, either. Given the upcoming fixtures, it’s likely to get worse before it gets better. But if Pellegrini gets the sack, is there a better manager available, another highly-rated veteran? Sam Allardyce, again? David Moyes, again? Tony Pulis? And mightn’t they have lost a step, too? Just be thankful you don’t have to make the choice, and can stick to evaluating players, like poor old Roberto.