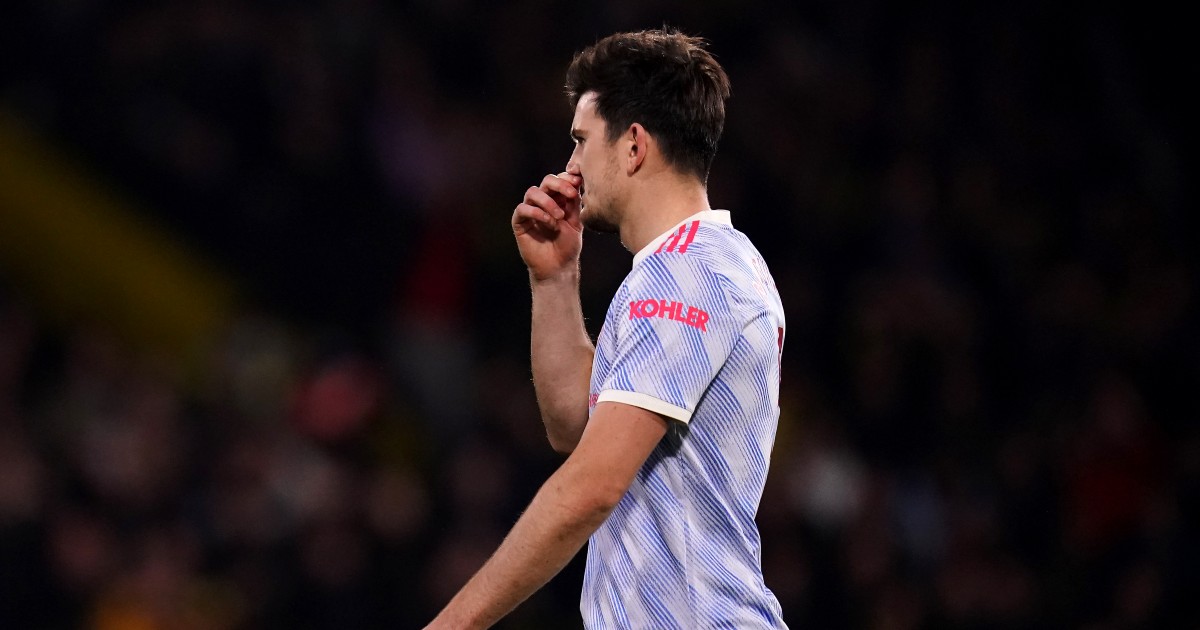 Ole Gunnar Solskjaer has managed his last game for Manchester United and there are mixed feelings in the Mailbox. Mainly from opposition fans.

He has gone. Send your thoughts on that and anything else to theeditor@football365.com.

The third in 27 days!
We need an emergency emergency mailbox

Wot, no Man Utd Emergency Mailbox this week? Has everyone given up?

As I write this, the board are having an emergency meeting. As a Pool fan, I think we should all pray for Ole…
Stewart

Sake, Watford
WTF Watford. We get it. It is Manchester United, and you are excited that they are so sh*t that you can completely annihilate them, but you don’t do that. Beat them 2-1, take the points, and Ole keeps his job. Everyone benefits.
Ryan, MCFC

You’re only supposed to blow the bloody doors off!
Aidan, Lfc (sending this before the Arsenal game and hoping not to regret it)

Liverpool are rubbish
FFS! Our 5-0 win at Old Trafford is looking less and less spectacular with each game week that passes..
Ricky, LFC

Oh Harry
The hubris of Harry Maguire is delightful. Giving it the big ‘un after scoring his “redemption” goal against Pot 4 Albania, only to turn in a disastrous performance and get a red card in his next club game, as Manchester United slump to yet another defeat.

This must rank as one of the greatest instances of schadenfreude in football.
Matthew, Belfast

Once again, Maguire’s form is not down to a lack of fitness or a euros “hangover”, whatever that’s supposed to mean, but a combination of a lack of talent and the emotional intelligence of a child. The fact he needed to give a sit down interview to the news over him not being able to handle a story getting out about getting drunk and mouthy was bad enough but the ear cupping thing proves how sensitive he is and points to a lack of self awareness and plain old smarts. A defender doing that after a home goal against Albania after 20 minutes is just laughable. Not having the foresight to know he was leaving himself open in the event of another one out ten performance coming soon after was embarrassing. Thinking he wasn’t at risk of another sh*t performance soon after was just stupid.

That he’s captain, let alone plays a regular starter for Manchester United is as much of an indictment on the manager and the directors as the identity of the manager himself. If that leak about Conte’s preferred United players was true, there’s hope that top managers, the types you would hope would still want the job, see him as the liability that he is but it’s probably going to be Brendan and his envelopes who’s just as much of an ego maniac as that Tracy Thorn lookalike who’s supposedly the leader of the United dressing room.

The club is f**ked.
Eamonn, Dublin

McZinedine?
After that performance I’m pretty sure Zidane would get into the first team at United, let alone the dugout.
Chris Hardy

Tom Cleverley >
By the time this maybe gets published, I sincerely hope that the change has been made as he just hasn’t got it.

Your captain, after having a nightmare after nightmare since the start of the season, possibly even further back, has just thrown you even further under the bus than you already were.  Yet, you stand on the side and give him the touchy touchy hand feely feely.  Not quite a high five but it might as well have been.

Maguire, cup your freakin ears now?  It’s all very well not looking like the complete buffoon that you clearly are against international sides of the Tiverton Town standard, but Watford just made you look like what your C.V says you are.  Not your fault for the 80m price tag, but you are not only the worst centre back I can remember seeing at Utd and I remember Prunier, you are the worst captain I have seen for any club.

You are a joke of a player, stealing a living and if you are happy being remembered by every football fan as a joke then fair enough.  You get selected for England all the time because you put on a Utd shirt, same as Rashford and Shaw.  Don’t get your PR team to send out another pathetic media post, nobody cares.

Your captain should be the manager on the pitch and that basically says it all doesn’t it?  Weak, pathetic, limp, lethargic, clueless.  Tom Cleverly made you look the standard you are. Tom Cleverly, the guy not good enough 8/9 years ago would walk into that Utd side.  Ben Foster just had the easiest game of his season at 38 years of age.

And yes, it is the Glazers fault, for keeping the guy in a job past his probo period of caretaker and then backing him with stupid F you money.
I feel for any manager coming in to sort this lot out.  Despite what many will say, Ole has not done a good job, he will leave the club in a far worse footballing state than DM, LVG and JM ever did.  A squad full of over paid, over hyped, bang average footballers who wouldn’t get regular football in many epl teams.

Congratulations Ole.  You have built a team that will win Utd nothing.  I guarantee, Utd will win nothing with 90% of those players in the team.  That is how much of a terrible job Ole has done and the rebuild required by any manager foolish enough to take it on.

Oh and Bruno, you have been utter garbage this season, I don’t believe your hype. Standing behind Ole, gesturing to the crowd that it’s all of you not just Ole. Maybe, just maybe, you had a purple patch when you came and your true skill level has been unearthed.  Don’t give us the “We are all to blame” when every single one of you have been bottom half championship level for months, maybe that actually is their level.
450million, good job Ole good job. The only manager ever to make Ronaldo look $h1t.
Mike (can’t even attempt my dark humour in this one)

The only option
As I type on Saturday night, Radio 5 Live report that an emergency board meeting has been called to discuss OGS’s future.  And this is where Man U fans can relax because the cavalry has arrived!

This is where the MUFC hierarchy, led by the football genius that is Ed Woodward, demonstrate their repeated uncanny ability not only to just buy the right player at just the right time and at the right price, but also to appoint, once again, the perfect candidate to manage the biggest club in the world.

So that’ll be Roy Keane, Paul Scholes, or Gary Neville then! What about all three?

Oh, wait though.  What an idiot I am.  There is, of course, only one realistic option.  A man who literally created the ‘United Way’ and whom, it is understood, personally persuaded CR7 to ‘come home’ rather than go to City.  And how did that turn out for both the club and Ronaldo?

Welcome back Sir Alex!
Mark (It truly wouldn’t surprise me if they did).  MCFC.

Rotten
First off, well done to Watford. They really played superbly with Dennis the pick of the bunch. Hard to begrudge Ranieri the adorable owlman. Their front three of King, Sarr and Dennis should give them hope for the rest of the season.

Onto United, that was one of the worst first half performances I’ve seen with every player seemingly forgetting how to play football. With the amount of misplaced passes it is clear this is a team of individuals with the no one seeming to know where their teammates are. This goes back to the training ground where it is the managers job to really drill it into these players so they know exactly what they are doing. Pep said after beating United ‘the move is the ball, everyone has to be in their position’. His players don’t even have to look or think before they pass the ball, they already know exactly where their teammate is as it’s been drilled into them.  I’ve no idea what Ole and his coaching staff do all week, it will be baffling if he keeps his job after this. I think too much emphasis is put on the lack of pressing as it’s currently trendy but the more worrying thing is our inability to play simple passes and keep the ball. Our midfield has been lacking that sort of metronomic player that controls possession such as Fabinho or Jorginho for years now.

As terrible as Ole is you can’t blame him for the awfulness of some of the players. Fernandes is having a nightmare this season, the amount of times he needlessly gives the ball away and then that shocking slice that lead to the penalty. And then there is that braindead idiot Harry Maguire who as soon as he’s named on the teamsheet it already counts as a goal for the other team.

The second half was much improved after the introduction of Van De Beek. He really was superb linking up play, finding pockets of space and making runs into the box. I’ve no idea what Ole has against him but I just give up if any combination of McFredic is playing instead of him in the next game. Ronaldo and Sancho seemed to come alive when they had VDB to exchange passes with.

That penalty was baffling though. Why do they get to retake after their own player was the one who encroached?

If Ole doesn’t step aside or get pushed after that performance I’ll be amazed but I think even changing manager United will still have the same problems. There’s just something really rotten about it all.

Anyway, love the site. Been checking in daily since the days of Pete Gill’s Whingers and Moaners and Conor Burn’s daily missives. Still enjoying Jonny Nic’s columns but wish he’d sprinkle in some more tales from his 80s Rock’n’Roll excess years. Keep up the good work!
Ed, Ottawa

Well that was one of the most abhorrent displays in the last 2 years. Time for Ole to pack his bags and go before he taints his united legacy.

Solskjaer hasn’t been helped by a captain who to put it bluntly is f**king criminally stupid, how many times can a ponderous centre half feel the need as last man to try and take the ball past his marker? A needless red when VDB was single handedly pulling us back into the game.

Next up Phileous Fogg Ba Sakka the amount of times he wanders around oblivious to all around him is astounding, what with him, Maguire and Matic all trying their best to see who could be the smelliest turd in the fetid united bog is it any wonder Watford suddenly looked like prime Juve FFS.

The incompetence stems from the top with a board with no knowledge of football and a man still in charge of recruitment who couldn’t recruit Donald Trump to judge a wet tee shirt contest. Until things change at the highest level then things will stunk down below.
Paul Murphy, Manchester (Ronaldo is Woodwards dick waving worse)