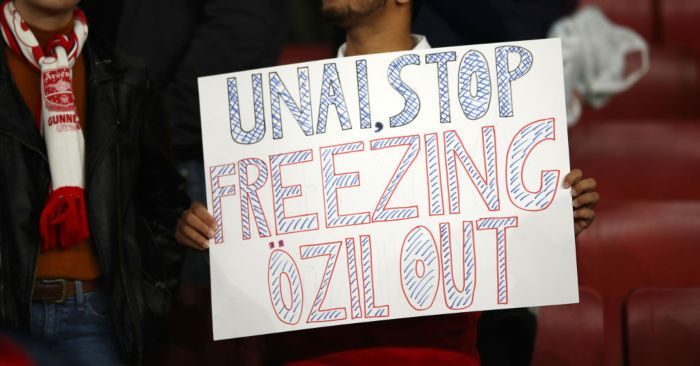 It is beginning to look like Unai Emery’s days as Arsenal manager are numbered. His three-year contract has a break clause in it, and the expectation is that, without Champions League qualification, it’ll be activated.

It is difficult to make a case for him if he cannot return the Gunners to the top four after three successive seasons of missing out. That was the point of bringing him in to replace Arsene Wenger after 22 years in north London. But one issue – or, more pertinently, one player – has dominated his 18-month stint so far, and not for the better.

Mesut Özil has played just a handful of minutes this season, and it looks like he won’t play many more. With each passing day, there is a growing feeling of a stand-off between the former Germany international and his manager. This is not a new phenomenon: it happened with Paul Pogba and Jose Mourinho at Manchester United for example. But while it is usually the player who wins out in the end, that isn’t the sense you get here. Emery may not be around next season; despite insisting he will stay, having signed a new £350,000-per-week contract in Wenger’s final season, Özil may well be forced to leave in January. Long-term, whatever happens, both men are unlikely to be sticking around at the Emirates Stadium.

Fans appear split on this issue. Özil is not a workhorse, the kind of player Emery loves. He is the quintessential luxury star, and to get the best out of him, the coach must take the rough with the smooth. Wenger did, but despite a successful spell at Real Madrid before a then club-record £42million switch to Arsenal, he once endured an infamous half-time grilling from Jose Mourinho over his work-rate and mentality.

Emery certainly isn’t the first man to take issue with Özil’s ‘relaxed’ approach, with improving discipline and competitiveness part of his remit. His misgivings are at least partly justified.

But with recent results and performances only adding to fan pressure, completely ostracising the playmaker is cutting his nose off to spite his face. Murmurings of discontent between the pair were apparent almost straight away, but they became clear when Emery refused to offer specific credit to Özil for a match-winning display at Newcastle in September 2018.

One of the biggest criticisms of Wenger towards the end of his reign was his handling of contracts. All too often he would allow his key players to run their deals down and assume the upper hand in the ensuing negotiations. Samir Nasri, Robin van Persie and Alexis Sanchez all departed to direct rivals as a result. In the case of Özil, offering the deal he did was a bad move with hindsight. It has allowed the 31-year-old to become a nuisance to Emery, who wouldn’t be wrong to suggest a lot of his side’s best performances have come when he isn’t slowing their play down.

Monday’s defeat at Sheffield United suggested Emery’s impact on the team’s ability to deal with tough conditions hasn’t been that great, while he needed to call on Nicolas Pepe to turn the game against Portuguese outfit Vitoria in the Europa League on Thursday. There may be little to suggest Özil would have stood tall in the cauldron of Bramall Lane, but in both games a huge issue was breaking down a resolute and organised defensive structure. Emery has publicly admitted he has made Arsenal less creative than they were under Wenger, and after losing Aaron Ramsey to Juventus in the summer to yet another protracted contract saga, he only has Dani Ceballos to call upon to unlock the door.

Özil’s craft and inspiration has been badly needed this week. Emery should at least give him a chance to change games, because his approach and the players he is opting for instead clearly aren’t having the desired effect. He doesn’t have another No. 10 at his disposal. Arsenal have lost out a lot because Emery relies on Ceballos for a spark, but he is often too deep in the play – when indeed he plays at all – to really impact the top end of the pitch.

The issues at Arsenal run deeper than Özil; they may even run deeper than Emery. Over the past 15 years, a lot of different factors have seen them slip from title challengers to perennial top four outsiders. Wenger’s work after the big stadium move in 2006 – what he calls the greatest part of his reign, consistently qualifying for the Champions League on a strict budget – has never really got the credit it deserved. But he overstayed his welcome a little, and the power he held, which is more evenly split at boardroom level now, caused issues.

Emery has done some good work in challenging circumstances, but having enjoyed a productive summer amid a backdrop of doubt over the finances, this is the time for him to deliver by returning the club to Europe’s top table. Right now, that looks unlikely, and there may be a need for somebody more inspiring to replace him. He hasn’t done a bad job, but Liverpool reaped the rewards by acting ruthlessly in October 2015, sacking Brendan Rodgers for Jurgen Klopp. If the right man comes along, Arsenal cannot afford to hesitate.

Neither Emery nor Özil have covered themselves in glory at all recently, and both their days may well be numbered. But for now, they should work together to improve Arsenal’s fortunes. While some believe one player cannot make all the difference, tapping into the flawed genius of their No. 10 won’t do any harm, especially with their troubles being laid bare right now.