Home All The News Emery: Arsenal must ‘learn to play’ with ten men 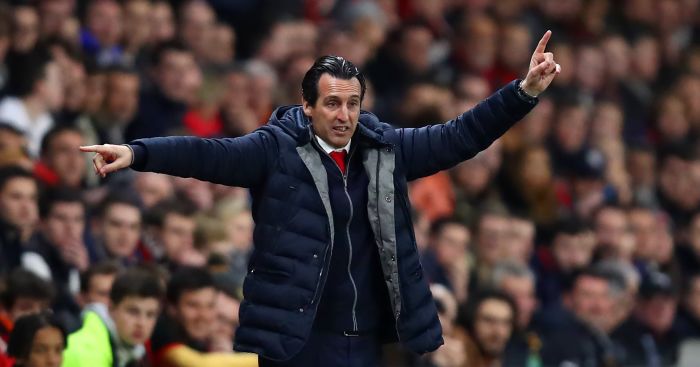 Arsenal head coach Unai Emery wants his players to learn how to operate with 10 men after another red card led to a Europa League defeat to Rennes.

The Gunners have had three players sent off in their last six matches, with Sokratis Papastathopoulos’ dismissal at Roazhon Park playing a big part in Rennes recording a fine 3-1 win.

Alex Iwobi’s third-minute cross-cum-shot had set the visitors off on the right path – only for things to go wrong once Sokratis picked up two bookings in a seven-minute spell.

Rennes drew level immediately after the dismissal as Benjamin Bourigeaud produced a stunning effort before the Ligue 1 outfit dominated the second half and a Nacho Monreal own goal and a late Ismaila Sarr header secured a deserved first-leg lead.

Arsenal now have it all to do in next week’s second leg if they are to progress to the quarter-finals and Emery felt the sending-off changed the game more than his side should have allowed it to.

“I think we changed more than we want, but a red card can come,” he said.

Arsenal had Lucas Torreira sent off in Saturday’s north London derby draw with Tottenham and Alexandre Lacazette missed the Rennes game after he was dismissed in the previous round against BATE Borisov.”Two yellow cards and it’s the referee’s decision. After, I think we must learn to play – when it’s coming like today – with one less player on the pitch.

“Not a good experience today, because we couldn’t do our work in difficult moments, in difficult minutes, with one less player, like we wanted. I think we can do better.”

Both Lacazette and Sokratis will now miss the second leg but Emery does not believe there is a discipline issue in his squad.

When the question was put to him, he replied “No” before adding “We can analyse these three red cards individually.”