Home All The News Emery: Arsenal need to recover quickly from ‘lost opportunity’ 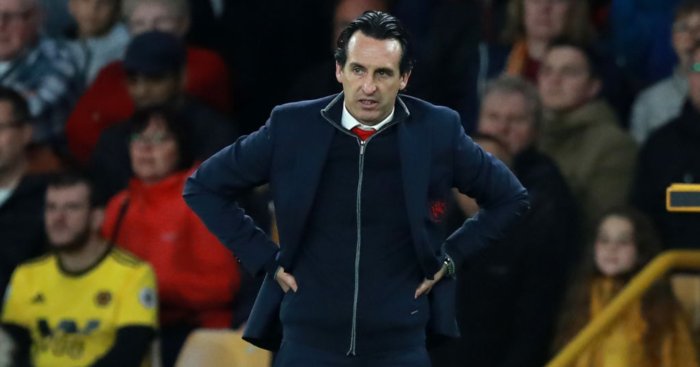 Unai Emery vowed to continue to fight for Champions League qualification on two fronts after Arsenal’s hopes of securing a top-four finish in the Premier League were taken out of their own hands.

Defeat to Wolves on Wednesday night left the Gunners fifth in the table and a point behind London rivals Chelsea, with three matches remaining.

A draw would have been good enough for Arsenal to move back into the last Champions League qualification place, but first-half goals from Ruben Neves, Matt Doherty and Diogo Jota set Wolves on their way to a 3-1 win at Molineux.

Emery‘s side face another testing away game at Leicester on Sunday – hours before Chelsea play Manchester United at Old Trafford.

“We lost in our hands the opportunity for fourth but we can also recover this opportunity,” said Emery, whose team are also in the semi-finals of the Europa League.

“We have lost opportunities in the last two matches, losing to Crystal Palace and here (at Wolves) but the last three matches we play in the Premier League we have opportunities.

“Generally we are now disappointed but we need to look at all the season. We lost this opportunity today but we need to prepare as best as possible for Leicester. Again it is very difficult but hopefully we can take something.

“We will be doing all we can in Leicester on Sunday to take the three points. Top four is the target, a difficult target, but we have a chance in this competition and also in the Europa League.”

Arsenal started the match at Molineux strongly but never recovered from Neves’ opening goal after 28 minutes and found themselves 3-0 behind at the break.

The Gunners managed to stem the tide in the second half and Sokratis Papastathopoulos headed a reply late on.

Emery said: “We didn’t recover quickly enough from their first goal but in the second half we had recovered our game plan and we were better.

“We needed to be more calm and try to impose ourselves on them but they were better than us and were more strong in their game plan.”

Arsenal became the latest of the Premier League’s top-six clubs to taste defeat at Molineux, where Chelsea, Liverpool and Manchester United have also been beaten this season.

The victory enhanced Wolves’ own chances of securing European football for next season as they moved back into seventh place – which will be enough for a Europa League spot should Manchester City win next month’s FA Cup final against Watford.

Asked about seventh spot, Wolves boss Nuno Espirito Santo said: “It doesn’t mean anything, you can repeatedly ask that but our aim is always the next game. We must look where we came from, let’s go step by step.

“I am very proud of the way we work and how the players engage themselves because we give everything we have and that’s what makes me proud – the belief in ourselves.

“Playing against any team is difficult but Arsenal have quality players. In order to create anything we had to be organised and work hard on the shape of the team. Movement off the ball was also very important.

“It was a good performance against a top team. It was a fantastic performance from the players.”