Home All The News Emery: Cech ‘deserves our trust’ despite Chelsea reports 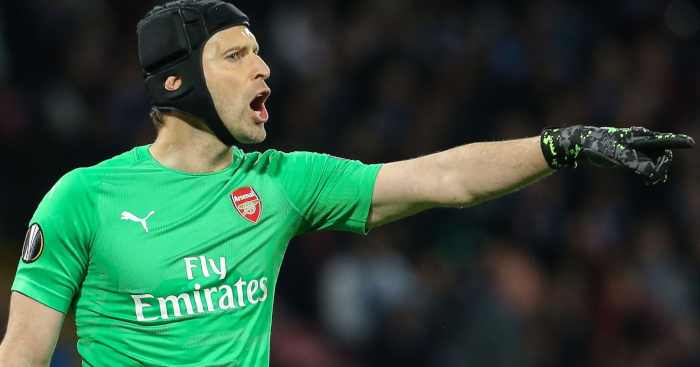 Unai Emery will have no qualms starting Petr Cech in the Europa League final, despite the retiring Arsenal goalkeeper reportedly returning to Chelsea this summer.

The 37-year-old will bring the curtain down on his illustrious playing career in Wednesday’s showpiece in Baku, where the goalkeeper could scarcely have wished for a more fitting final game.

Cech joined Arsenal in 2015 after a medal-laden 11 years across London at Chelsea, where he reportedly could return this summer in a sporting director role.

The veteran has maintained his “sole focus” is on helping the Gunners triumph in Azerbaijan and Emery insists the background noise about a potential Stamford Bridge move is not coming into his thinking.

“I respect him a lot,” the Arsenal boss said. “His career is amazing. First like a person and second like a professional goalkeeper.

“I think he deserves (us) to trust in him. Not because I am saying to you here – because his career says to us, he is a gentleman. And tomorrow he can start, he cannot start. I am going to decide.

While Emery‘s response to that question could hardly have been clearer, the Arsenal head coach suggested Bernd Leno could get the nod in goal despite Cech starting every Europa League knockout game.

“The first XI for tomorrow, you know, I want to say to the players first,” he said.

“I am going to say tomorrow. I can’t speak about Petr Cech a lot, but above all, he’s a great man, a great professional.

“He is amazing, his behaviour and his year here with us. It is going to be the last match tomorrow because he decided to finish his career and I want to do something important with him.

“This is my conversation with him. I want to do something important with him in the last moment of his career, playing or not playing.”

Emery looked relaxed throughout the pre-match press conference at the Baku Olympic Stadium – perhaps unsurprisingly given he won the Europa League three times as Sevilla manager.

The Spaniard will be hoping to utilise those experiences in order to end his first season at the Emirates Stadium with a trophy that offers their only route into the Champions League.

Emery baulked at the suggestion that he could surpass predecessor Arsene Wenger’s achievements by winning a European trophy, but the importance of success is clear after finishing fifth in the Premier League.

“After our target started with two ways. One is in the Europa League and second in the Premier League to go to the Champions League because it’s the first objective.

“And after to play with the titles and we’re going to do this tomorrow: play with one title and one possibility to go to the Champions League.

“But football is to enjoy and to play with all our good spirit and also I think this competition is improving a lot.”