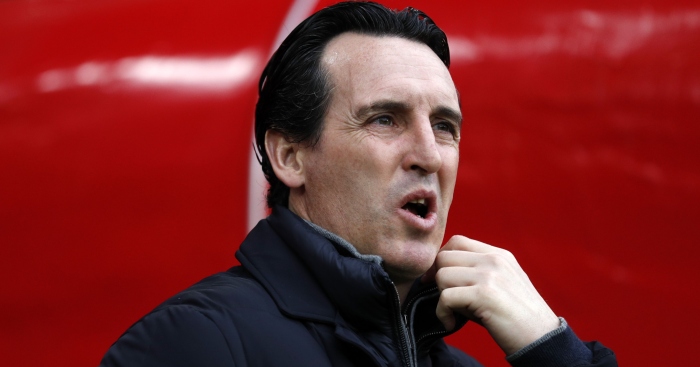 Unai Emery insists he learnt how to control his emotions on the touchline after kicking a bottle into the Brighton fans during Arsenal’s Boxing Day draw on the south coast.

The Gunners boss was fined £8,000 after accepting a Football Association charge over the incident as he reacted angrily during the latter stages of the 1-1 Premier League draw.

Brighton are the visitors to the Emirates Stadium on Sunday for Arsenal’s final home game of the season.

Emery’s side retain an outside chance of finishing in the top four and head into the Seagulls clash having earned a 3-1 victory in the first leg of their Europa League semi-final against Valencia.

The Spaniard insists he has been better with his emotions since the incident at Brighton – although he also remonstrated with officials during last weekend’s 3-0 defeat at Leicester.

“Yes, I remember that. I learned not to repeat it,” he said.

“I can take some frustration and use it as a positive for us and to keep calm in the difficult moment.

“It is also a process in the Premier League because when we played away at Brighton at Christmas, we needed to win and be strong and progress.

“It is things like that when we speak about how we are doing now, we remember those moments and now we have the possibility in the last two matches to be in the top four, that is important.

“We are also in the semi-final against Valencia with the second leg and those memories and moments we can take into the last matches.”

While a guard of honour has been arranged for Petr Cech, who retires at the end of the season, and Aaron Ramsey – joining Juventus on a free transfer when his Arsenal deal expires – Emery will also bring the curtain down on his first season as a manager in north London, with the Emirates already feeling like home.

“Each match for me is special when we are playing at home with our supporters,” he said.

“I want to enjoy things with our supporters and our players, enjoy winning as part of a long career here and be a coach who enjoys the Arsenal stadium for a long time.”

Asked how he had changed since first walking onto the Emirates Stadium pitch following his unveiling on May 23, the 47-year-old said he retains the same ambitions almost a year later.

“My idea is to create here a new history with Arsenal with big ambition.”