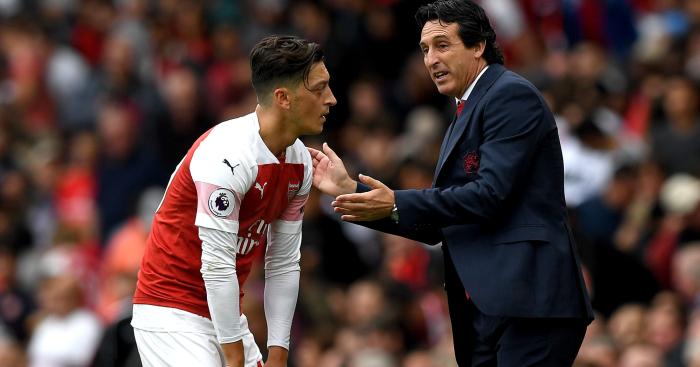 Unai Emery has denied claims he dropped Mesut Ozil because of an argument at Arsenal training this week.

Ozil was not named in the matchday squad for Saturday’s game against West Ham, with ‘illness’ being cited as the reason.

But ESPN Brasil journalist João Castelo-Branco insists those claims are erroneous, and that Ozil was ‘cut’ after arguing with Emery in training.

‘Ozil had an argument with coach Emery at practice this week, came out screaming and is cut today,’ he posted.

‘Information from more than one source linked to the club.’

Arsenal beat West Ham 3-1 in the first sign of tangible progress under Emery, who was asked about the reports post-match.

“He was ill and yesterday we decided with the doctor and with him that he would not play,” he explained.

“Today he is here and with the team also because he feels better today but he is not here now because he was sick yesterday.

“The information [on the argument] isn’t true. I don’t know who started telling people this information.

“He was sick yesterday. And decided not to play today.”

Spoke to Unai, he denied problem with Ozil and said he was unwell yesterday.
But that’s not what we‘ve heard around the corridors of the Emirates.