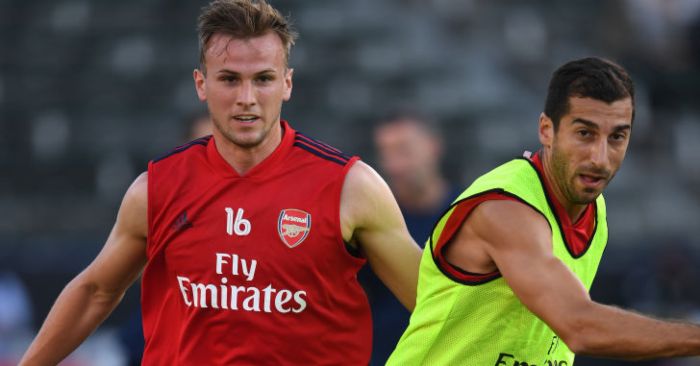 Arsenal boss Unai Emery wants Rob Holding to be one of his leaders at the Emirates this season.

Centre-back Holding, who arrived from Bolton in July 2016 for £2million, is back in full training after seven months out with a knee ligament injury.

Emery is planning for the departure of club captain Laurent Koscielny, who is facing disciplinary action after refusing to go on the club’s tour of the US.

Granit Xhaka is understood to be the favourite to get the armband from the Frenchman, but Emery said this week he wants “between three and five captains in the team”.

And now Emery has claimed he could look at Holding being one of his five leaders this season.

“I want one English player in these five captains,” Emery said. “An English player who grew up in our academy can understand the English spirit and Arsenal values. These are the qualities and more.

“We are really happy with his (Holding’s) progress. We need his performances as a centre-back. (Before) he had his injury he was really playing with big performances.

“We lost some players with big experience and a long time in England and Arsenal like Cech and Ramsey. We lost Koscielny too. They started one day being captain when they were young.

“We have young players with experience, players starting for the first time to be considered as captains. If we decide on a player they have the capacity and deserve to have the opportunity to be captain.