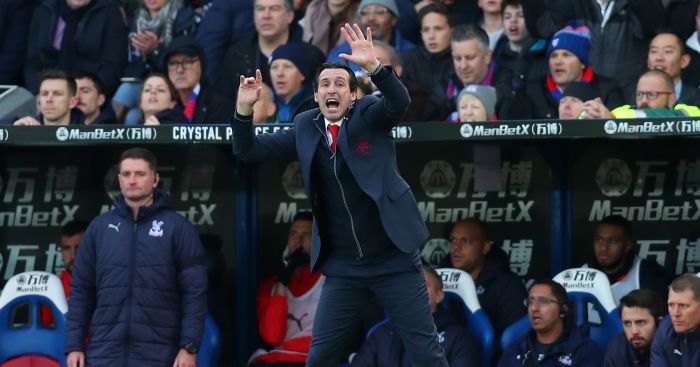 Unai Emery admits he was “disappointed” with Arsenal’s 2-2 draw at Crystal Palace and has explained why Granit Xhaka celebrated his goal with him.

The Gunners went behind on the stroke of half-time when Luka Milivojevic converted a penalty before Granit Xhaka and Pierre-Emerick Aubameyang nudged Emery’s men ahead.

However, it wasn’t enough for victory as Milivojevic scored another penalty seven minutes from time after Wilfried Zaha was fouled by Xhaka.

“I am disappointed with the result but our work is good,” Emery told Sky Sports. “We drew, it’s not bad, it’s better to win but looking at the game in 90 minutes it is a deserved result.

“Two penalties against us in the box is a difficult action for the defence. Xhaka is playing left-back, he is better in the middle. I will say to him nothing (about giving away the penalty).

“Today we were competitive for 90 minutes, we need the balance and after 1-2 we are on a good result. I knew we needed another goal for calm.”

When he was asked why Xhaka ran to him after he scored, Emery added: “In half-time we spoke about these free-kick situations and his quality on the free-kicks is good – I told him to try from the free kicks. I push him and he did that.”