Home F365 Says Emery: From ‘first to be sacked’ to the Prem’s safest man 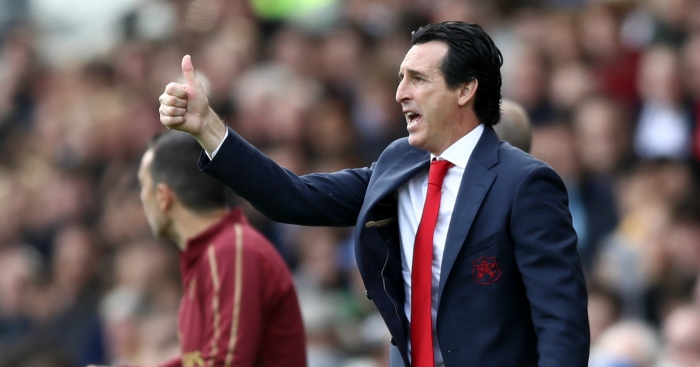 It took just one game for Tony Adams to publicly question Unai Emery. “I don’t know what he’s been doing for the last six weeks,” pondered the former defender, ‘deflated and disappointed’ by seeing his beloved team beaten on the opening day. He would add that Arsenal are ‘nowhere near’ winning the title.

Some people in life are not blessed with patience. They are so eager to see the finished article that they overlook the time required to plan and write it. They become so obsessed by the destination that they take the journey itself entirely for granted. Adams is one of those people; his ancestors were presumably seen peering over Leonardo da Vinci’s shoulder 500 years ago, tutting and complaining at how long his painting of this bloody Italian noblewoman was taking.

No matter that Arsenal had been pitted against a team that had finished 37 points ahead of them last season, nor that this a new manager in a new league with a new group of players. Ignore too that winning the title was not in Emery’s short-term remit, for this was “an Arsene Wenger performance”.

To most, that came as little surprise: this was an Arsene Wenger team. The Frenchman had left but Arsenal were still covered in his fingerprints. He had managed them for 22 years, moulding them in his own image. Emery was given a minimum of three years to change that, not one game.

But the subsequent defeat to Chelsea saw the pressure mount further. Emery’s selections were scrutinised, his tactics scoffed at. Some even said he might be the first Premier League manager to lose his job.

Two months on, there might be no man safer in their post. A 5-1 dismantling of Fulham boosts Arsenal up to fourth in the Premier League table, two points behind the three joint leaders.

It is a remarkable turnaround, and testament to both Emery and his players’ ability to block out the noise. The early-season reaction saw the jerkiest of all the knees take aim at an easy target, criticising the manager for not adding the final gloss of paint to a car that had no engine or wheels when he inherited it in the summer. Arsenal were without direction, but now have a Unai-nimous leader.

They also have a squad showing the benefits of elite coaching. Wenger did not leave Emery a squad lacking in quality, but the Spaniard has refined what he has been given. Alex Iwobi and Danny Welbeck look excellent, Lucas Torreira is settled in midfield alongside Granit Xhaka, and Rob Holding is playing a game that suits him. Arsenal finally look more than the sum of their parts.

And those parts can be truly wonderful on their own. Alexandre Lacazette is in phenomenal form, scoring two sublime goals against the Cottagers; he has now directly contributed to eight goals in his last seven appearances (five goals, three assists). Doubts remains over Aaron Ramsey’s future, but not his end product or impudence. Pierre-Emerick Aubameyang might be the most devastating impact substitute possible. They all combined to turn another half-time draw into a resounding full-time win, and every goal was built through teamwork, not individual brilliance.

Many will still doubt the credentials of this Arsenal team. They will see a list of beatable sides such as Fulham, Qarabag, Watford, Brentford, Everton, Vorskla, Newcastle, Cardiff and West Ham and see nothing special, potential obstacles, but none too difficult to overcome.

Yet a ninth consecutive win in all competitions should not be taken for granted. It is their first such run since April 2015, and even the absolute best find it difficult to string together such a consistent period. Manchester City’s last run of nine straight wins was in October 2017, while Manchester United (January 2017), Chelsea (December 2016) and Liverpool (April 2014) prove it does not happen all that often. For Tottenham, it has not happened in the 21st century.

One can only contemplate what Adams is thinking now. There will be no wondering “what he’s been doing for the last six weeks,” because the answer is simple: winning.

Arsenal will not lift the Premier League trophy come May, but that was neither a realistic short-term aim, nor a pre-season demand. Emery was put in charge to oversee gradual improvement, however unsexy that may be. In returning Arsenal to their seat at the top table so soon, he has exceeded early expectations.