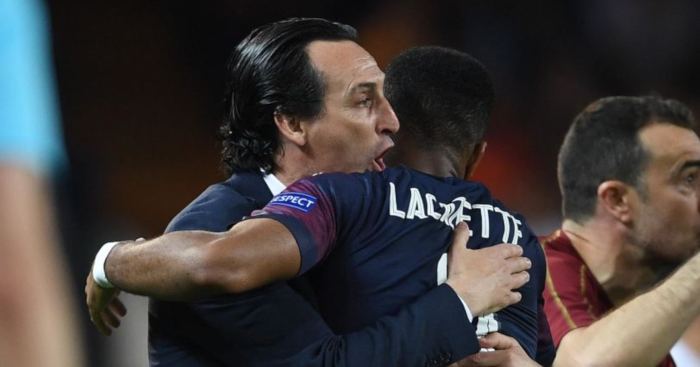 Alexandre Lacazette believes Arsenal head coach Unai Emery has taken the club to the “next step” – even if they fail to beat rivals Chelsea in the Europa League final.

The Gunners secured safe passage into the final in Baku on May 29 as they won 4-2 at Valencia on Thursday night to seal a 7-3 aggregate success.

A Pierre-Emerick Aubameyang hat-trick was the highlight of the evening at the Mestalla as Lacazette also struck in what turned out to be a comfortable evening for Emery’s side.

Kevin Gameiro had given Valencia the lead on the night and pulled another back in the second-half but Arsenal’s place in the showpiece never looked in doubt.

Lacazette was part of the Arsenal side knocked out by Atletico Madrid at the semi-final stage last year in what was Arsene Wenger’s final season in charge at the Emirates Stadium.

Emery was drafted in as his replacement with the remit to secure a return to the Champions League after two years in the Europa League.

But winning the Europa League, something Emery achieved three seasons in a row when manager of Sevilla, is another route back to the continent’s premier club competition – and Lacazette feels the club have already made steps in the right direction following the Spaniard’s appointment last year.

“That’s what the club saw him as the coach to help the team go to the next step and he did because we go to the final in his first season,” Lacazette said of Emery.

“I hope it is going to be a great final for us and we will prepare for it. It is really important. The Champions League is a big competition.

“Last season, we failed at the semi-finals and this season we wanted to be better.”

“We knew in the Premier League we played bad in the last month so we know it was a great opportunity to go to the Champions League but as well it is about trophies. The club needs to win a trophy, the players as well.”

Lacazette and Aubameyang have now scored 48 goals between them this season, including Arsenal’s last eight in the Europa League.

The pair are also friends away from the pitch but Lacazette insists there is no personal competition between them in terms of who scores the most goals – and that he would be happy if Aubameyang ended the season ahead of him.

“No, of course not,” he replied when asked if there was a friendly rivalry to be the top goalscorer.

“We just want to help the team. He can score 10 more goals than me, it is OK.

“Now it has been one year and a half we played together. I knew Auba before and we talk a lot, not only about football. When you like someone, you talk a lot and of course on the pitch it is easier.”