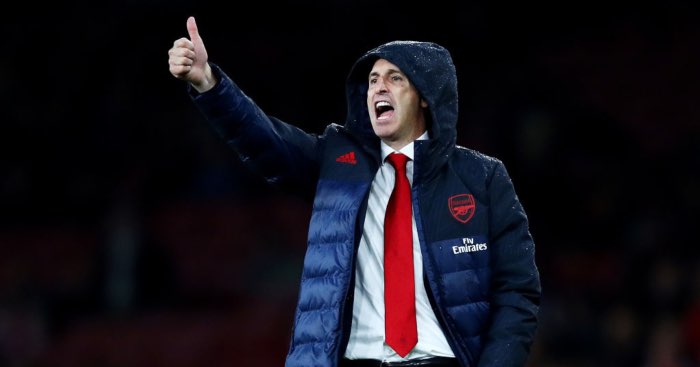 By the end of Arsene Wenger’s 22-year reign Arsenal were a bit of a mess. Dry rot had spread through every part of the club, ten years of stagnation – a gradual decay of ideas, of quality, of training, of everything – exacerbated by all operations being essentially run by one man.

The task post-Wenger was to de-clutter and compartmentalise structurally while re-introducing complexity and tactical hard work. It would, we all agreed, take years to modernise the club; to untangle the physical and emotional connection.

A cursory look at how Manchester United had coped – and still are coping – with Sir Alex Ferguson’s retirement reaffirmed the size of the job, and that was a manager who left on a high. Wenger’s final year brought 63 points and sixth place, leaving Arsenal closer to rock-bottom West Brom than champions Manchester City. Of more pressing concern, it left them 12 points shy of a top-four finish and secured a second consecutive season of Europa League football.

Unai Emery would be given time, then, to turn things around. The first season would be a transitional year – a free hit – and judgements would tentatively start to form in year two. As it turned out, in 2018/19 Arsenal were just two results short of a top-four finish and a Europa League trophy, which would, by any measure, have been a perfect season. Had they beaten Brighton in May rather than drawn, and had they beaten Chelsea in Baku – two results for which Emery should obviously take the blame – Arsenal would be at least two years ahead of schedule.

But many fans felt deeply uneasy, and just eight games into the 2019/20 season – with Arsenal third, one point behind Manchester City – some are ready to see Emery sacked. Few are happy with the job he is doing. It is a peculiar, though revealing, dissonance that gets to the heart of football’s modern obsession with identity.

Every club is searching for a ‘way’ these days, a tactical ideology they can easily define and demarcate. The widening financial chasm in football has severely narrowed fans’ ability to dream, and as a consequence this is no longer a results business; when the scope of your club’s achievement is finishing between 6th and 9th, for example, meaning must be found in the abstract. Teams like West Ham must at least play attractive football, or have an identity that can distract us from the truth; from the death that is profitable stasis.

Arsenal fans have played this game more than most, having spent ten years under Wenger knowing exactly how their season will go but appreciating they at least knew roughly what they stood for. And so it’s no surprise that as Man City and Liverpool move into their own alien bracket – a Messi/Ronaldo of club football – the rest of England’s Big Six are desperate to construct a coherent personality.

It is fair to say that Arsenal do not have one. They still drift through matches, ambling around as if in a daydream, defenders switching off and midfielders jogging listlessly back. Their away form remains pretty horrific, and even at the Emirates victories are often thanks to a moment of magic from Pierre-Emerick Aubameyang in an otherwise oddly directionless, tactic-less performance. It is easy to see why so many Arsenal supporters fear the club is not making progress under Emery, and considering the emotional drain of those final tedious years under Wenger it is entirely understandable that fans are easily triggered by signs of stagnation.

But these are still early days. The sheer scale of the de-Wenger-fying task must be kept in mind. And, most important of all, it should be remembered that highly complex modern tactics always look horribly flawed right up until the moment they aren’t.

There were long stretches in Pep Guardiola’s first season at Man City when things truly looked hopeless, when they wafted so aimlessly through defeats that fans had legitimate concerns about the viability of his tactics. He turned it around much faster than Emery, of course, but in his first two summers Guardiola was able to spend £320m net on 12 first-teamers (Emery has spent £140m on eight). Jurgen Klopp’s example at Liverpool is even more revealing; his first two-and-a-half years ricocheted between bursts of brilliant football and stretches where they just drifted. Liverpool were waiting for the “boom” moment (as Neven Subotic put it) that had suddenly turned Borussia Dortmund into one of the world’s best teams.

Guardiola and Klopp struggled at first because their tactical approach is not just a vague idea; this is absolute precision coaching, meticulously choreographed in each movement so, like a fine-tuned machine, the slightest malfunctioning part disrupts the whole. Until everything clicks, nothing does.

Arsenal can experience something similar with Emery. He wants to use pace in much the same way Liverpool do, with the aim to either press high and win the ball in a dangerous area or pass out from the back to draw the opposition high and then counter-attack behind them. It explains why Arsenal persist with extremely dangerous passing sequences around their own box – Emery is deliberately luring opponents in – and why things look so meaningless when games quieten. The manager demands urgency, constant attempts at vertical passes or else it all looks oddly passive. If you need a concrete example of what Emery is trying to achieve, just look at everything Matteo Guendouzi does.

We are seeing flashes of it working, but right now Arsenal don’t have the right players to make a permanent shift. When Kieran Tierney and Hector Bellerin are fit things should dramatically improve, however, leaving the Gunners arguably just one (or two) centre-backs short of what they need to become a consistent and identifiable force.

The problem is this: there will be no build-up to Arsenal’s “boom” moment, which means simply waiting, and waiting, for the change. Scars from the final Wenger years make that a particularly anxious task for Gunners fans.

But then again there really is no rush. Arsenal are in the top four while several of their Champions League rivals are reaching crisis point. Emery is, statistically at least, right on track. There is room for a little patience. And the pay-off will be worth the wait.