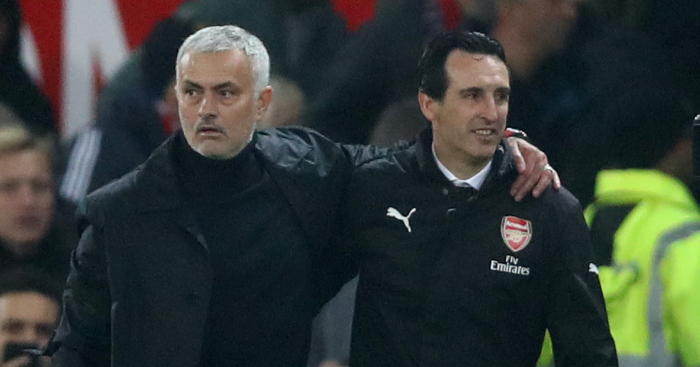 Reports have suggested that Arsenal’s players have ‘serious reservations’ about Unai Emery in what seems to be one of the first steps towards an inevitable ending. When the players turn and the leaks increase, history suggests the writing is already on the wall…

Louis van Gaal
Since Sir Alex Ferguson left Manchester United, the dressing room has become leakier by the year. What was a steady flow under David Moyes became a torrent for Louis van Gaal once the United players realised they could get away with it.

Not used to Van Gaal’s prescriptive methods, United’s stars were quick to let the world know the conditions they were being subjected to shortly after Moyes’ replacement arrived. But it wasn’t until midway through his second season in charge when those around the squad became particularly loose-lipped.

‘The players are said to have lost faith in Van Gaal and his methods,’ claimed  the Mirror six days before United went to Stoke looking to avoid a fourth-straight defeat. Losing to the Potters, it was said, would cost Van Gaal his job. They did, but it didn’t.

So the players, feeling so oppressed by Van Gaal, doubled down after Christmas. In February 2016 after they had lost at Midtjylland, it emerged that the Dutchman had instructed his players to always take a touch before shooting.

‘The Independent understands that the often critical opinions of former United midfielder Paul Scholes, who has described Van Gaal’s football as “boring” and “lacking creativity and risk”, are shared by influential voices in the dressing-room who crave a return to the free-flowing and free-thinking football of the Sir Alex Ferguson era,’ it was reported. ‘The extent of his determination to micro-manage events on the pitch is highlighted by his insistence that his players must control a ball before shooting, in order to have a better chance of shooting accurately.’

Mark Ogden’s mole told him: ‘You only have to look at the first goal of the season, when Kyle Walker’s own goal put United ahead against Tottenham. It came from a cross into the penalty area and Wayne Rooney would normally have just passed it into the net, but he took a touch, the ball got away from him and Walker knocked it into the net.’

‘There is also concern within the squad that United’s opponents have now become so familiar with the tactics employed by Van Gaal that they are able to predict where the ball will be played and therefore to nullify any attacking threat posed by United.’ Three and a half years – and two managers – later, here we still are.

Of course, at United, the leaks don’t just come from the dressing room. They also spurt from the boardroom whenever Ed Woodward is under the cosh. Everyone knew Moyes and Van Gaal were done for at least 24 hours before the axe officially fell. Van Gaal was celebrating winning the the FA Cup when reports surfaced of his imminent sacking, confirmation of which did not come for more than two days.

That period of indecision allowed Daniel Taylor to report on the list of grievances he had been given. ‘Van Gaal has been described among the players as “hard work”,’ he wrote in the Guardian. ‘His tactics have been so unpopular that various members of his squad have talked between themselves about openly defying him. It hasn’t reached the point of mutiny, but it has been a close-run thing sometimes. The consensus has been that “it can’t get much worse than it is”.

Taylor’s revelations also detailed United’s players’ dissatisfaction over being ‘crucified’ in analysis sessions, and the lengths they went to to avoid ingesting any of Van Gaal’s feedback, even when it was sent via email.

Jose Mourinho
The most damning leak of Mourinho’s United reign was more Woodward running a bulldozer through the pipes than anything.

On the eve of the season, after Mourinho’s pre-match press conference in which he declared that finishing second the previous season was “one of his greatest achievements” – one of the things he was right about –  the assembled hacks were given another treat, when all the reasons the manager had not been given what he wanted through the summer were laid out bare.

After that, Mourinho became increasingly isolated and very few of his players were willing to side with the manager. The following month, he was said to have left several senior players ‘angry and frustrated’. ESPN reported that ‘only a handful of United stars are now fully behind Mourinho’, who was ‘picking fights with his players and then asking them to play for him’.

The report continued: ‘A source close to a first-team member at United has told ESPN FC that the player has said how he believes he has regressed at Old Trafford and failed to improve under Mourinho’s management, having credited previous coaches with taking his game to another level.’

One of the players who remained behind Mourinho was later singled out by dressing-room moles. A month before the manager was axed, his faith in Nemanja Matic ’caused some consternation within certain elements of the Manchester United dressing room’, reported The Times.

By November, the Mirror quoted ‘a source close to the dressing room’ as saying that Mourinho had ‘lost 90 per cent of the squad’s support’. Indeed, by the time he was sacked in December, it was said that Woodward acted because ‘up to four members of the squad said they would submit transfer requests’ the following month.

Maurizio Sarri
Like at Manchester United, the Chelsea squad is all too aware of where the power lies between the dressing room and whichever manager is trying to control it. Chelsea players have done for many managers in the past, including Andre Villas-Boas and Luiz Felipe Scolari, but even without the huge personalities those coaches had to contend with, the squad still got their way over Mourinho and, most recently, Maurizio Sarri.

At first, Chelsea’s players acknowledged that Sarri was not entirely to blame for their struggles last season. According to the Telegraph, a number of players felt Sarri was handicapped by the lack of ‘old-fashioned leaders’ made available to him by those responsible for shaping the squad.

But one of the few leaders at his disposal was stubbornly ignored. Gary Cahill was club captain before Sarri arrived but the Italian barely spoke to the former England centre-back. When Sarri’s future was in serious doubt, Cahill took the opportunity to stick the boot in.

“I see some of the situations with players who won the title with Chelsea, not just myself, and it just hasn’t been right,” he told the Telegraph. “It makes it very hard for me to have respect for someone who has not respected what some of us have won with the club.”

Cahill felt free to speak. He was a few weeks from the end of his Chelsea career, and with Kepa Arrizabalaga’s refusal to leave the pitch and his team-mates’ decision not to rebuke him, Cahill knew Sarri cut a lone figure. Once the Italian had gone, many of the players’ gripes emerged when it became clear that Sarri would not out-last Cahill.

The Daily Mail published a list of the Chelsea players’ grievances within hours of the emergence of an approach from Juventus. Sarri’s refusal to give up smoking or to allow his players a lie-in didn’t go down well, nor did the fact he preferred to train in the afternoons when the Chelsea squad was more accustomed to finishing work at lunchtime.

When they did train, ‘it could be tedious and repetitive, heavy with team shape and pattern of play in the Italian tradition,’ the Daily Mail was told. That monotony extended to tactics. After losing to Man Utd in the FA Cup, ‘dissent broke open in the dressing room, with voices raised and Sarri was criticised for his tactical stubbornness.’

Arsene Wenger
“My job is to protect the players,” said the Arsenal boss after a dispiriting Carabao Cup final defeat to Manchester City in 2018. Unfortunately, they failed to return the favour as his reign at the Emirates reached a fractious conclusion.

The #WengerOut contingent of Arsenal supporters tended to shout the loudest and eventually, many of the players turned away from the manager too. After that Wembley defeat to City, the Mirror’s John Cross wrote: ‘It can be revealed that a growing number of players have lost faith in Wenger and whether he can take the club and the team forward.

‘There is a feeling within the squad that it is time for change… the players are worried about being able to compete, fear they are slipping behind tactically and there were complaints that a tough training schedule in the build-up to the final left them shattered.

‘They still have huge respect for Wenger and like him but several influential players believe the time is right for change if they are to turn things around.’

Only a couple of days later, after they lost 3-0 to City again in a home league fixture, leaks surfaced of an inquest. As dressing-room lock-ins go, it sounds as meek as you might expect from Wenger.

‘Wenger challenged his under-performing stars to prove they have the quality to play for a club the stature of Arsenal,’ said the Daily Mail. ‘There was no ranting or raving but sources claim the talks were honest and frank.’

Wenger’s aim was apparently to get his players to recognise the importance of qualifying for the Champions League. Once that was no longer feasible, the Frenchman was shuffled to the side for Emery to take over. And now, history appears to be repeating itself.