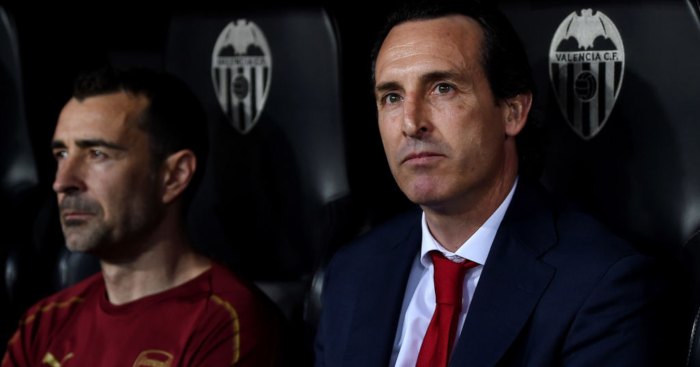 Pierre-Emerick Aubameyang and Arsenal strike partner Alexandre Lacazette were hailed as “amazing” by head coach Unai Emery after their goals steered the Gunners to a Europa League final date with rivals Chelsea.

Having led 3-1 from the first-leg, Emery‘s side were favourites to advance and Aubameyang’s hat-trick eased them into the final as they won 4-2 on the night and secured a 7-3 aggregate success.

Lacazette also got his name on the scoresheet to ensure the pair have scored all of Arsenal’s last eight Europa League goals between them – with a total of 48 goals shared across the campaign.

In a week of English comebacks in the Champions League, Aubameyang’s goals made sure Arsenal were not on the receiving end of another.

Despite falling behind to Kevin Gameiro’s 11th-minute effort, the Gunners rallied as Aubameyang equalised and Alexandre Lacazette struck to put them ahead on the night and in control of the tie.

Gameiro, who was part of Emery’s Sevilla side which won three successive Europa League titles, continued his fine scoring run in the competition with another – only for Aubameyang to add the gloss with two more efforts.

“I am proud of them,” Emery replied when asked about the impact of Aubameyang and Lacazette.

“Big players can be good strikers but when their commitment is like today, defensively also, to work to help us, it is amazing.

“Each match is different and I think today we showed everybody our character, and also our capacity to be together and struggle in some moments defensively, but also having good moments in attack.

“Against Valencia, not one team this year has scored four goals against them. Only one time, against Atletico Madrid, have they conceded three goals and we did that last week. It’s a very good team, a difficult team, and today we showed we can do that.”

A disappointing home draw to Brighton last weekend all-but ended any hopes of a top-four finish in the Premier League for Arsenal.

Emery, who has not lost a knockout tie in this competition since he was in charge of Valencia in 2012, knows he needs to win the same title in Baku on May 29 to seal a Champions League return for Arsenal in his first season at the helm.

After the semi-final, Arsenal released a statement criticising the “disappointing ticket allocation” for the final at Baku’s Olympic Stadium on May 29, with both clubs given just 6,000 tickets – and insisted they are talking to UEFA in an attempt to increase the figure.

“We have been informed by UEFA that both clubs will receive an allocation of just 6,000 tickets each for the match,” it read.

“We are in active discussions with UEFA for more tickets for our fans but this disappointing ticket allocation obviously presents us with extreme difficulties in how we allocate tickets to you, our loyal supporters.”