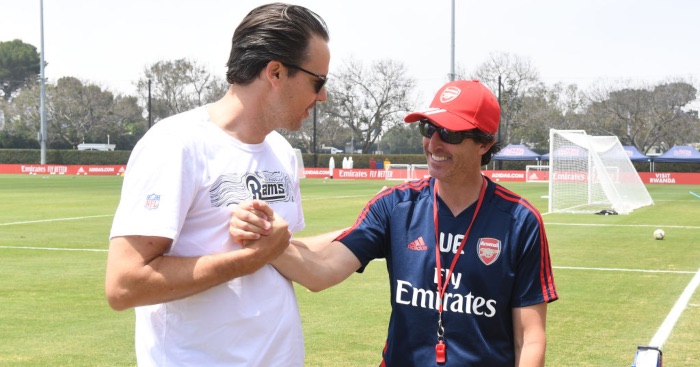 Unai Emery has revealed how Arsenal chief Josh Kroenke reacted to Granit Xhaka’s shocking outburst in the 2-2 draw with Crystal Palace at the Emirates.

The Arsenal captain cupped his ears after being substituted amid sarcastic cheers from the Arsenal fans, then was seen mouthing “f**k off” as he ripped his shirt off and stormed down the tunnel.

Emery condemned Xhaka response after the game and has since explained why Xhaka needs to apologise for his actions.

The Spanish boss says he has the backing of Josh Kroenke – son of Arsenal owner Stan – who also agreed that the captain was ‘wrong’ to engage with the supporters, reports Metro.

“We know our responsibility is to help everybody, and also when we are making some mistakes to recognise it.

“Sunday for example, after the match, Josh Kroenke was also in the dressing room speaking with me.

“We were speaking for 10 minutes about the situation but all the time helping each other.

“He’s supporting me, he’s supporting the players, we were talking about the circumstance with Granit Xhaka, saying that he was wrong and we need to manage that with him.

“And yesterday the same, it was the day off for us and the players but we were here also, I was here and also I was speaking with Raul, with Edu, and also speaking with Xhaka.

“But now preparing the match tomorrow is the most important, but also we need the time managing different situations.’