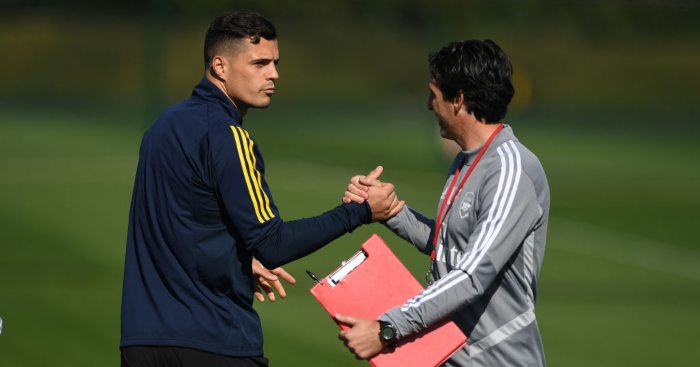 Unai Emery insists he “trusts and believes” in Granit Xhaka after confirming the midfielder is the new Arsenal captain.

The Switzerland international has worn the armband in six of Arsenal’s opening eight games of the season but Emery had delayed announcing his decision, allowing his players to blind vote on their preference as skipper.

Emery prefers to have a leadership group made up of five players and the Spaniard revealed that Pierre-Emerick Aubameyang, Hector Bellerin, Alexandre Lacazette and Mesut Ozil will be his other captains, in that order, should Xhaka not play.

Xhaka, 27, was jeered by sections of the Emirates Stadium as he was substituted in Sunday’s 3-2 win over Aston Villa but Emery, who defended Xhaka following that incident, believes the high regard in which he is held among his team-mates can be replicated among the fanbase.

“I talked to him and we want to change that opinion outside because the respect he has inside is very important,” Emery said.

“But also to show outside, keep moving ahead, playing, improving, behaviour, commitment and in each match is for him, me and for everybody a very good opportunity to show his capacity.

“But really, I trust and believe in him. He is a good man, good professional, good player.”