Home All The News Emery: Xhaka ‘wrong’ to react angrily to Arsenal boos 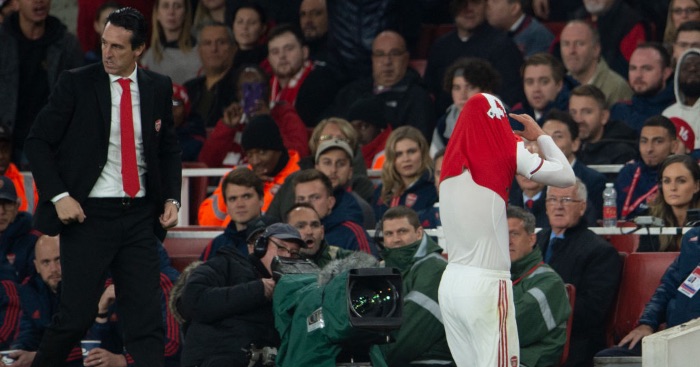 Arsenal manager Unai Emery says Granit Xhaka was “wrong” to react angrily at the Arsenal fans reaction to his substitution against Crystal Palace.

The Gunners gave up a two goal lead to draw 2-2 with Crystal Palace in a game marred by VAR controversy.

The Swiss appeared to shout “f*** off” after being booed by the Arsenal fans, before taking off his shirt, walking past Emery and storming down the tunnel.

“He’s wrong but we are going to speak inside about that situation,” Emery told BBC Match of the Day.

The Arsenal boss added: “I want to be calm but, really, he was wrong in this action.”

News of the change was first greeted with ironic cheers which turned to boos as Xhaka took his time to leave the field, sparking an angry reaction from the 27-year-old.

It is not the first time Xhaka has been booed this season, but the uneasy relationship with the Gunners fans did not stop Emery appointing Xhaka as club captain in September after the summer departure of Laurent Koscielny.