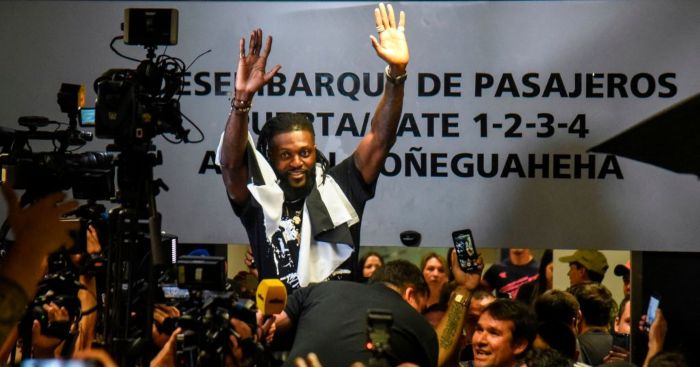 There had been reports of interest from Chelsea and Man Utd but the strongest links were to the Gunners.

And Adebayor – who played for Arsenal, Man City, Spurs and Crystal Palace during his time in the Premier League – says he urged Partey to choose the Gunners as they are “more than a club”.

Speaking in Ghana, Adebayor said (via The Metro): “He told me that some clubs in England, namely Arsenal, Chelsea, Manchester United, and others have shown interest in him and he needs advice.

“I advised him to go to Arsenal because I have had the opportunity to play there and I think it will be good for his development.

“Arsenal is more than a club, it is a family and I’m impressed with his performances so far in the Premier League.”

Partey starred in the Gunners’ 1-0 victory over Man Utd at Old Trafford earlier this month and Paul Merson was very impressed by what he saw at the time.

“It was a good away performance, it wasn’t great,” Merson told Sky Sports. “I wouldn’t get carried away and say ‘Oh my God it’s a turning point’.

“They beat a terribly, terribly poor Manchester United team on the day. They’ve done a job, we’ve seen them lose those games over the last five or six years.

“But I think Partey’s a massive, massive difference. I mean, what a signing.

“When you talk about signings in the summer, he’s got to be number one. I cannot believe, without being horrible here, that Arsenal got him.

“I don’t mean that in a horrible way, they’re all crying out for it – I know Manchester United are top-heavy and they’ve got Fred, (Scott) McTominay and (Nemanja) Matic, but they haven’t got a Partey.

“Manchester City too, Fernandinho’s coming towards the end, Rodri hasn’t really pulled up any trees. You’re thinking ‘Wow, who didn’t see this?’

“When you’re talking about holding midfield players and you want discipline, there’s no better place for discipline than Atletico Madrid.

“They play the ultimate disciplined way. They can go away and shut up shop, then other days they can go and attack teams. He’s a massive part of that.”