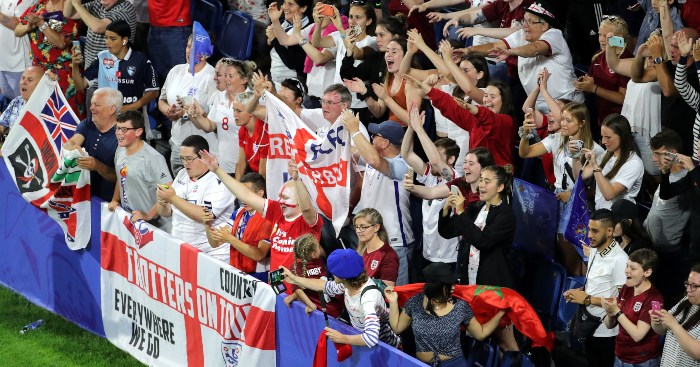 While millions of people in the UK are enjoying the World Cup on TV with the BBC getting record audience numbers, I’ve got a couple of friends – Jim and Maggie from Newcastle – who are actually in France following England and having the time of their lives by the sound of it. Though long-time England followers, this is the first time they’ve gone to a women’s international tournament. I was talking to them on Skype on Sunday and thought some of their experiences of the tournament were really interesting. Here’s a few of their observations. Imagine these words being spoken in the two most Geordie voices you’ve ever heard.

Maggie: “Aw man, it’s been a fantastic experience, Johnny, really great. It’s a bit hotter than Whitley Bay, mind! But it’s really been different to following the men’s team. God, it’s so different, isn’t it, Jim? We were in Nice for the Scotland game and it was such a great atmosphere. Not even a hint of trouble or bad vibes at all, which there bloody would have been if it was England’s men playing Scotland in a World Cup in France. I mean, you can just imagine, can’t you?”

Maggie: “Less of a certain sort of men, aye. No chanting IRA songs or that sh*te. People are just being nice. There is absolutely no threat of violence or, y’know, just unpleasantness. No idiots creatin’. I don’t mean there are no men here, there are, but the balance between male and female fans is more even than usual, like.”

Jim: “I’ve been saying that when you get more women in any social situation, men tend to behave better anyway. You don’t get all the lads giving it the large one, do you? The lasses tend to slap them down. Mags doesn’t agree though.”

Maggie: “No, no man, I do agree but only to an extent but I’ve seen enough hen parties in the Bigg Market to disprove that notion! But actually here, I think the lack of aggression is down to the sort of men who are out here following the football. They don’t need keeping well behaved by their women. The blokes out here are canny lads. This’ll sound snobby but I don’t care, it’s nice just because idiots that aren’t here. The troublemakers. You know who I mean…”

Jim: “…the lads on lad’s trips in their football colours just caning the drink from dawn ‘til dusk. They’re not here. Those lot probably think watching women’s football would make them gay! The funny thing is, right, there’s still plenty of drinking and we’ve been nicely pissed most nights haven’t we? But there’s no trouble at all. Not even a whiff of it. It’s such a good crowd of people from all countries. Everyone just gets on like decent human beings. But, I mean, you shouldn’t even have to say that, should you? Should just be normal not to smash a place up or get into fights. It just proves how good things are once you take out that bad element.”

Maggie: “The Dutch are amazing. They’re everywhere and they all march through the streets before a game but there’s nothing to worry about, it’s all so positive, y’know. It’s like tribalism – everyone supporting their country – but without aggression and arrogance. I wish this was what going to international football was always like. Normally there’s a load of twats just making everything, y’know, sh*te.”

Jim: “The Norway game in Le Havre was amazing. Best international game I’ve ever been to in 35 years. This will sound incredibly drippy, right, but I think the vibe from the players rubs off on the fans. It’s a two-way street. I don’t know if it’s the same watching on telly, but…I don’t know…it’s hard to describe, like…makes you feel good.”

Maggie: “Yeah, they do. The England players are so happy when they score, they’re so together and it’s so like, joyous, the look on their faces, we’ve been in tears haven’t we? We love ‘em.”

Jim: “Aye we have, like. You can’t help get caught up in it. When Ellen White scores, then does that glasses thing like blood Shelvey, man – mind, I’d have her in the team before him – but she’s just got that shocked look on her face, like it’s saying ‘oh my God I’ve scored in a World Cup!’ It just sets me right off…Mags is right, it’s the joy. There’s no posing or trying to be cool the way there is in men’s football. We’ve been saying since we got here that it’s been pure football. It’s hard to get across how different it is and how it makes you feel different. We’re veterans…”

Jim: “…aye we are that, like. But we’ve been to loads of England games and this has been just something else.”

Maggie “I think you feel closer to the players because they’re not pampered multi-millionaires. I really do think that, me. They’re regular lasses who’ve had to really put proper graft in to get where they are and they got, like, sod all money along the way and they’ve had to fight all the prejudice as well. They’re bloody warriors those lasses, and I’ll tell you what, they’re as hard as bloody nails; tough as you like, man. We’ve seen Steph and Millie and others take a right clattering, especially off the Cameroon and they were just…nah…ye cannot hurt us, ya bitch, you know? It was brilliant. Lucy’s middle name is actually Tough did you know that? It is, aye. The fact that so many of them are from the northeast makes me so, so proud. It really does, even if they’re from Sunderland!!”

Jim: “Mags is right. They’re very easy to like as people and that does make a difference. I suppose in the men’s game there’s so much focus on them and they get defensive because the papers want to have a pop at lads like Raheem and that. But here no-one is going on about money all the time. It’s all positive. Like I say, it’s pure football, like.”

Maggie: “Did you see Lucy’s goal, Johnny? We were right behind the goal. Best. Thing. Ever! I said, didn’t I Jim? At the corner, I said ‘it’s going to Lucy. she’s going to batter it’ and she did. I totally lost my shit when that went in. We both did, didn’t we?”

Jim: “Aye, we did like. What a bloody strike that was, by the way. A bloody rocket.”

Me: “OK apart from that. You’ve been to them all. Are you saying this is better than them all?”

Jim: “Definitely. For the overall fan experience, but for the actual football as well. People will think that’s mad, I know, but we’ve seen some cracking games.”

Maggie: “Easily the best. The vibe is amazin’. Even if we don’t beat USA it’ll still have been the best ever for me. I love our team, I love the players, I love Phil Neville, even. It’s the positivity that gets to you. There’s a real love to the whole thing like what I’ve never felt before. Makes me really proud of the girls. I’m going to start bubblin’ in a minute, man! It’s even made losing Rafa more bearable! What a bloody sh*tshow that is by the way. Dear me. I son’t want to go home and face Ashley and all that shite. What it’s like here, this is what I want football to be like from now on.”

Jim: “I don’t want it to end. We’re going to go to final no matter who gets through. We’d already got our tickets but I really hope England get there. If we do, I’ll be in floods, me.”

Maggie: “I think the people who are here are proper football fans. We all just love football and that’s why we’re here. But here’s the thing, Johnny, those blokes we were talking about, the ones who often ruin everything at football, they think they are the proper fans. But they’re not. Right? They’re just monsters. Everyone hates them, except themselves. But we’ve just got so used to them, like…making football what it usually is…that we don’t even realise it can be so, so different. But this has shown us what life is like without them and it’s bloody great. It really is. We don’t need them. Like I say, I want it to be like this all the time.”

Jim: “That’s the thing I’ll take away from this trip an’ all.”

Their experiences seem to have been typical of many people’s if other newspaper reports are anything to go by, and it does raise some important issues. Toxic masculinity has been such a well-worn phrase recently, but that does seem to be at the heart of what Mags and Jim were talking about in relation to the atmosphere both in the ground and on the streets, perhaps especially for international games.

At the risk, once again, of hilariously being called a ‘soy boy’, all the aggression, the fighting, the abuse, the bad behaviour – albeit by a small minority – can be seen as an expression of an awful sort of maleness. And when that is stripped out, everything is obviously going to be much more enjoyable. I suppose every party is better when the twats don’t turn up, that much is obvious, but it would appear the World Cup this summer has provided a clear illustration of what life is like without those elements in a way that has simply not been possible to envisage at a big tournament before.

I also think the empathy she speaks of between fans and players is a really interesting dynamic. I’ve heard this said many times in relation to the women’s game, that there is a positivity often absent in male football and I have to say I’ve been touched by this as well watching the games.

Whether this is, as Maggie suggested, due to the different financial status of the women’s game, is harder to discern. When, for example, Liverpool were beating Barcelona 4-0 I don’t think any of us who were overcome with the emotion of the game were thinking about money at all, and yet much of the most bitter emotion directed at players and at clubs does centre around money, be it transfer fees or wages. So it must be in the mix somewhere.

But while the Women’s World Cup might be challenging how we think about the game and about the culture around it, more than anything else, and this is perhaps the best thing of all, it is just delivering a lot of bloody great football and making a lot of people happy. No wonder it’s doing so well on TV.