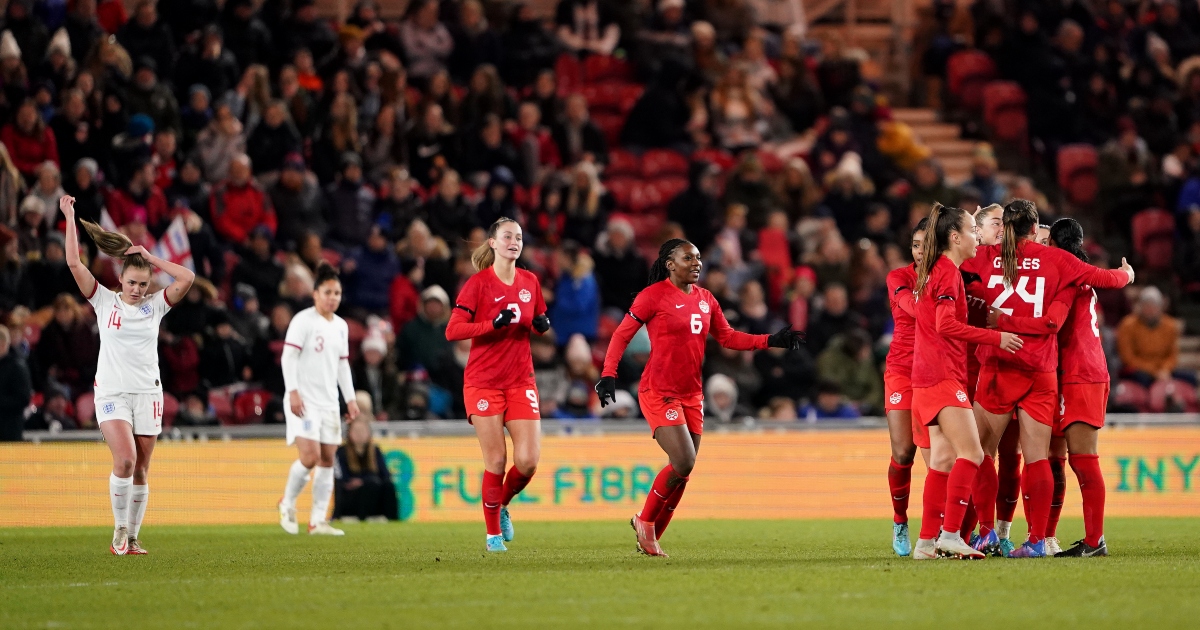 England were denied a winning start to their Arnold Clark Cup campaign as Olympic champions Canada fought back to snatch a 1-1 draw.

Janine Beckie cancelled out Millie Bright’s equally-impressive first-half volley 10 minutes after the break to ensure the game finished 1-1 at the Riverside Stadium, just as Germany’s earlier clash with Spain had done.

Women’s football is being watched by millions on TV

In the process, she ended Sarina Wiegman’s six-game winning start to her reign as Lionesses bosses, although the Canadians represented a significant step up in class from their World Cup qualifying opponents with England having put 20 past Latvia without reply in their most recent fixture.

The draw on Teesside, coupled with equally-tough games against the Spaniards on Sunday and the Germans next Wednesday, are just the kind of tests they need ahead of the Euro 2022 finals this summer

Mary Earps’ goal was the first to come under pressure when central defender Kadeisha Buchanan met Beckie’s 12th-minute corner with a firm header which was blocked before Deanne Rose lifted the rebound over the crossbar.

England skipper Leah Williamson, lining up in a midfield role, fired just wide from distance at the other end four minutes later after Lauren Hemp had chased down goalkeeper Kailen Sheridan’s hurried clearance, but Sheridan was picking the ball out of her net with 22 minutes gone.

For the third time in the game and the second in quick succession, Fran Kirby pulled a corner short to the left foot of Alex Greenwood and, although Sheridan punched her cross away from the immediate danger zone, Bright returned it with interest courtesy of a sweet volley to open the scoring.

Who has impressed you most tonight, #Lionesses fans? pic.twitter.com/uNOyIMkATQ

Bev Priestman’s side responded as Desiree Scott and Julia Grosso started to make their presence felt in midfield, but with Keira Walsh dogged and Bright equally uncompromising behind her, they made little tangible progress.

Buchanan had to block from Russo and Ella Toone after Hemp had got in behind the Canadian defence once again 10 minutes before the break, and Hemp hooked a 43rd-minute attempt wide from Williamson’s floated cross to send the home side in at the break well in control, but only a single goal to the good.

The visitors adopted a much higher press as the second half unfolded in an attempt to deny the hosts time and space, and the ploy paid dividends 10 minutes after the restart when Beckie cut inside on to her left foot and thumped an unstoppable shot across Earps and into the top corner.

Hemp might have restored England’s lead within three minutes after breaking free down the left once again, although her effort was beaten away by Sheridan as Canada’s resurgence continued.

Wiegman’s response was to make four changes, one of which saw Lucy Bronze introduced for the first time since undergoing knee surgery in the summer, but it was fellow new arrival Beth Mead who tested Sheridan from range with 18 minutes remaining.

Jess Carter produced a vital block to deny substitute Nichelle Prince, who later shot straight at Earps when she might have done better and Sheridan saved from Georgia Stanway in stoppage time, but there was to be no late winner.