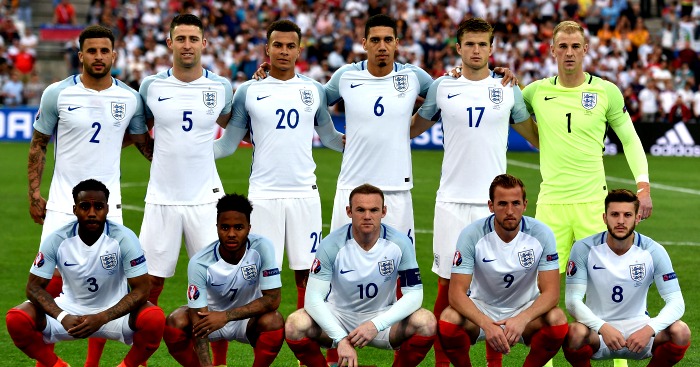 JOE HART
As difficult as it is to maintain high levels of concentration throughout a match in which you have faced only one shot on target, Hart must be scrutinised for the Russian equaliser. The Manchester City keeper was rooted to his line as Georgy Schennikov crossed, watched as Vasili Berezutski’s effort sailed over his head, then, realising his error, lazily appealed for offside as Denis Glushakov made sure the ball crossed the line.

Moments later, Hart’s initial error was nearly compounded by a moment of madness as he attempted to shepherd the ball out of play. He was dispossessed and England were so nearly exposed with their keeper stranded. He remains first choice, but more of the same and Fraser Forster will be whispering in Roy Hodgson’s ear.

KYLE WALKER
As someone who has never truly rated Walker as anything above average, the Tottenham defender’s form this campaign has been a pleasant surprise. After a man-of-the-match performance in the final friendly against Portugal secured his starting place ahead of Nathaniel Clyne, Walker justified his selection with a similarly tireless performance. His combinations with Adam Lallana on the right wing were England’s most potent first-half outlet. No player made more dribbles (six) or key passes (two).

But it is Walker’s defensive improvement which is most impressive. Russia struggled to build any substantial attack down the defender’s right-hand side. Clyne, his rival for the right-back position, had been perceived as the more solid option in the build-up to this summer; Walker is currently his superior both in defence and attack.

GARY CAHILL
Will the enduring memory of England’s Euro 2016 be of Cahill, recently instated as captain, sitting on the ground, mouthing “f*** me” after playing a part in conceding a disappointing late equaliser? The Chelsea defender’s most important contribution was his movement to deceive Russia goalkeeper Igor Akinfeev for Eric Dier’s excellent free-kick. Defensively, he is solid up to a point, but there is a constant feeling of crushing inevitability that a mistake or slight lull in concentration is nigh. When paired with a defender with the exact same attributes, the end result is predictable. Some great tackles on one hand; some poor decision-making on the other.

CHRIS SMALLING
There were times when Smalling made Artem Dzyuba look like the limited striker he is. There were also times when Dzyuba made Smalling look like the limited central defender he is. The 27-year-old Russian forward is an imposing physical presence, and the plan from England was clear: let Smalling deal with him, and let Cahill monitor any knockdowns. The Manchester United defender was far more troubled than he should have been.

DANNY ROSE
Once again, not quite as impressive as his Tottenham teammate on the other flank, but still a positive game from Rose. Where Walker benefited from link-up play with Lallana, the left-back was perhaps hindered by Raheem Sterling, who started well but was gradually overcome with apprehension. Rose was therefore left to monitor the left-hand side on his own for large periods, and his offensive play suffered as a result. The standard of his crosses was of a high quality throughout, however.

ERIC DIER
‘According to Gareth Southgate, he should be the first name on the England team sheet,’ I wrote after the 1-0 friendly win over Portugal ahead of the tournament. ‘Goalkeeper aside, it is difficult to argue.’ Dier climbed the final rung of the ladder with his performance on Saturday. He is England’s most important player.

In an attacking line-up, Hodgson entrusted Dier with building attacks from the back, and covering for the onrushing full-backs. The Tottenham midfielder was impeccable throughout. The relatively inexperienced 22-year-old provided the perfect shield for a central defence comprising 56 years, 68 England caps and extensive Premier League nous. Without him, the national team would be doomed.

WAYNE ROONEY
England’s man of the match? Possibly. Rooney finally managed to balance a deep-lying role with occasional bursts forward to positive effect. The Hollywood passes to either full-back does tend to frustrate after the 427th time, but it is at least nice to boast a player with such a varied passing range. In terms of tracking back, he did excellently to prevent Sergey Ignashevich a chance on goal just after the half-hour mark. He tested Akinfeev twice with decent efforts, forcing a remarkable save from the keeper after 71 minutes.

There are still signs of naivety in the midfield role, particularly when dispossessed by Aleksandar Kokorin on 49 minutes, where the 30-year-old reacted rather petulantly before realising he ought to help as the Russians launched a counter-attack. If not for a vital interception from Cahill, such a mistake could have been critical. But England looked a different, much less assured outfit when their captain was substituted late on.

Regardless, he truly is a player who will divide opinion…

Beginning to wonder why Rooney didn't play his entire career at centre midfield. Running the show.

DELE ALLI
One of England’s better performers in his first-ever major international tournament. The most impressive thing about Alli is that there remains significant room for improvement, yet he is so, so good. He combined effectively with Walker and Lallana in the first half, but rushed an opportunity at goal from Sterling’s cross after nine minutes.

Then you remember how he wriggled clear of five Russian defenders in the first half to provide Rooney with a chance at goal, and you get a little excited. His work to win the free-kick from which Dier scored should also not be forgotten.

ADAM LALLANA
Undoubtedly perceived to be the most fortunate individual to start, Lallana made a mockery of such claims in the first half. He set the tone for England’s pressing game, with Russia struggling to cope as they were rushed in possession. The Liverpool midfielder’s interchanges with Alli, Sterling and Walker were particularly pleasing, and he was the energetic pivot through which plenty of England’s attacks started and, unfortunately, largely ended.

Those who have watched Lallana keenly this season will have predicted his second-half showing. The 28-year-old notably tired, and failed to have such a positive effect on the game as Russia capitalised on England’s nervousness. Hodgson’s failure to substitute him for fresher legs was one of the manager’s many mistakes.

HARRY KANE
Thirty-three touches – the fewest of any starter aside from Aleksandr Golovin, who was substituted in the second half. Three shots, all of which were off-target. A passing accuracy of 73.3%, better than only Cahill and Hart in England colours. Too many corners.

England have been faced with numerous decisions in the build-up to Euro 2016: who to start in any of the four defensive positions? Who to start in midfield? Where to play Rooney? How to fit in Jamie Vardy? Few questioned the inclusion of Kane, only debating where to place him in the XI. After 90 minutes of anonymity against Russia, his starting place should be in jeopardy.

Some will argue that England’s midfield failed to supply Kane with enough support or opportunities to break forward. Some will defend him by pointing out his work-rate and effort. But where Vardy has been left out as the national team are using a system which patently doesn’t suit him, surely Kane should suffer the same fate?

The 22-year-old may have scored 25 goals in 38 Premier League games for Tottenham this past season, but his form for England often leads to disappointment. He is an incredible goalscorer and finisher, but Daniel Sturridge, a better passer with more clever movement, would be far more suited to this system. Against a supposedly susceptible and ageing defence, Kane looked undeniably poor.

RAHEEM STERLING
Few players can make the difficult look so easy and the simple look so impossible as Sterling. The Manchester City winger started well, providing a great cross for Alli after nine minutes, and bursting through before back-heeling for Rose to cross in the first half. This was the Sterling of old, the one who emerged as an incredible talent at Liverpool and commanded a £49m transfer fee just last summer.

What is evident to see when watching the 21-year-old however is his complete lack of confidence. When played through by Lallana’s flick on 24 minutes, his indecisiveness led to being caught by Igor Smolnikov. On numerous occasions, the winger had an opportunity to use his explosive pace to attack a weary Russian defence. Each time he opted to hold up the ball and wait for support; each time the backline was afforded the opportunity to recover. His departure on 87 minutes was a mercy substitution made around half an hour too late.

JACK WILSHERE (on for Rooney, 77)
One expects Hodgson had planned to introduce Wilshere as a substitute for Rooney long before Dier opened the scoring on 73 minutes. Moments later, the Arsenal midfielder was brought on. It was the wrong substitution at the wrong time. Where Rooney had learned where to sit back and when to break forward against the Russia midfield, Wilshere immediately sought to force the issue with surging runs through the centre. The 24-year-old offers something no-one else in this England squad can; that characteristic was not required at that point against this particular opponent.

‘Introduced too late to have an affect on the game.’

Assessments such as those above are often reserved for substitutions made in the 80th minute and beyond. It is difficult for any player to have an impact at such a late stage, particularly for a team already leading.

It is therefore testament to Milner that he managed to change England’s fortunes with the Three Lions leading upon his introduction with three minutes remaining. The ease with which Schennikov, who had played the full game at that point, evaded the Liverpool midfielder’s attentions before crossing for Berezutski’s equaliser was impressive. Milner was included in the 23-man squad to provide tournament experience and solidity. Hmm.