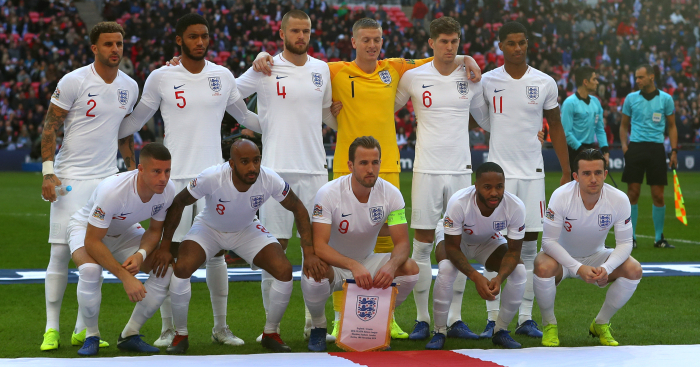 JORDAN PICKFORD
Had his customary shaky moments awfully early – and weirdly due to a refusal to use those lovely feet, instead thwarting an attack with a sliding chest tackle. But then this is Jordan Pickford, who has taken it upon himself to completely reinvent the art of goalkeeping.

The Everton keeper’s main strength did still have a chance to come to the fore. There was one sensational ball into Rashford to launch an immediate counter-attack in the first half, and he was one of many who coped rather well in the face of the Croatia swarm. There was nothing he could do about the deflected goal, save for lobbying for some better defenders.

KYLE WALKER
Time to thank those teammates, Kyle. Croatia’s goal came from England’s left-hand side, but the opposite flank looked altogether more susceptible to error. Walker’s positional awareness was a constant issue that the visitors failed to properly exploit, and his passing was a real problem. Two promising England attacks collapsed due to his misplaced passes, while at least one other helped Croatia create an opening in the second half. Kane was the only England outfielder with a lower pass accuracy. For a striker, that can be excused; for a defender, not so much.

JOE GOMEZ
That it was a quiet game for the Liverpool centre-half is far more of a positive than a negative. Gomez allowed Kramaric to get around him just once, but managed to force him just wide enough to avert the danger. He was otherwise solid without ever being as spectacular as he has been at club level. Speaking of which: that throw-in coach is handy, isn’t he?

JOHN STONES
Not his best game by any means. Kramarić rendered Stones his lady by turning him not once, not twice but three times to get his opener off, all while the Manchester City centre-half gladly held the door open. The Croatia striker was allowed seven touches in the area before taking his shot, all as a result of passive defending.

He also seemed uncharacteristically unsure in possession, perhaps because he was playing as the left-sided centre-half. He completed 80 of his 85 passes, but a worrying number of them put teammates under undue pressure, giving them few options against the Croatia press. Picking a pass is one thing; picking a good pass is something entirely different.

BEN CHILWELL
The biggest compliment you can pay to Chilwell is that he does not look out of place in this England side. In fact, in this humble group comprised largely of self-effacing players moulded through adversity, a left-back who had to pay his dues behind an ageing Christian Fuchs is in perfect company.

His poor set-piece delivery was frustrating in the first half, yet it was his free-kick that led to Kane’s winner. His volley to test Kalinic was also wonderfully controlled, while his crossing improved as time went on. Luke Shaw has a battle on his hands.

ERIC DIER
Let his second-half mistakes not completely taint a first half in which he exuded control and calm. Dier was excellent when England were in the ascendancy, recycling possession well and even driving forward from midfield on occasion. He was far more help than hindrance.

But then England temporarily lost their footing as a whole, and no player suffered more than Dier. He suddenly found himself as exposed as that recent picture of him wearing tracksuit bottoms, and the results were far less impressive and surprising. There should be a portion of the blame attributed to him for Kramaric’s goal, and he looked painfully out of sorts in the immediate aftermath before eventually settling again. He is England’s best fair-weather midfielder. Fortunately for him, the Southgate sun is piercing through the clouds more often than not.

FABIAN DELPH
If his captaincy against the United States was scoffed at, his performance against Croatia was an emphatic response to the critics. Delph led not through an armband, nor through displays of passion or patriotism. Instead, he guided England with a steady midfield hand, showcasing an underrated passing range and ability on the ball.

No player felt the NHS cuts quite as much as Delph, who received a fair few hospital balls, many of which came from teammate Stones. But his time maximising possession at club level has paid dividends, as he wriggled out of countless difficult situations to put England on the front foot. I am happy to admit I swooned when he carried the ball past four or five Croatia players before picking out Sterling’s run in the first half.

ROSS BARKLEY
Perhaps unfortunate to be substituted at a time when England were forced into chasing the game. It was not a question of a lack of creativity, for Barkley laid on more chances for teammates than any other player (2) except for Marcelo Brozovic (3). But it was likely more due to the booking he received after being caught out in possession by Luka Modric from a corner, and sacrificing himself to stop a potential counter-attack.

That mistake aside, it was a fairly tidy, disciplined but not mistake-free performance. On the one hand, he did not misplace a single pass all game. On the other, he was dispossessed three times, while Dier was just once and Delph wasn’t at all. He also had no shots on target from three attempts. Still plenty of room for improvement.

MARCUS RASHFORD
A player with no shots in 73 minutes was somehow the biggest threat to either side over the full 90. Rashford was electric on the right-hand side, cutting through the Croatia defence with some excellent runs and footwork. On one occasion he took on approximately 13% of Croatia’s entire population, but could not quite capitalise by finding the incisive final ball. That was to be his downfall: he completed six dribbles – two more than Croatia managed overall – but did not create a single chance. Injury was surely the reason for his substitution, for no player was making a bigger impact.

HARRY KANE
In his last game for England, Kane was the best player on the pitch despite not scoring. In this, he was absent for large swathes but finally found himself on the scoresheet at international level once more. There were brief signs of the striker that dominated Spain without ever feeling the need to score himself last month. He dropped deep to create a chance for Sterling after 12 minutes, and should’ve scored from the subsequent corner. Two further chances then came his way but he spurned both. And just when it seemed another game would pass the 25-year-old by, he had the final say as he so often does. The gamekeeper against Spain reprised his role as elite poacher against Croatia.

RAHEEM STERLING
It seemed that the threat of Sterling was more of a danger to Croatia than Sterling himself. This was far from his best performance, and he should’ve scored when he was played in by Kane early on. But his bright runs stretched a panicky defence, and his presence helped create space for Rashford to push into. No player was dispossessed more often (7 times), yet no player on either side made more tackles (4).

DELE ALLI (on for Barkley, 63)
Had 27 minutes. Not fully certain what he did with them. But England were losing 1-0 when he came on, and had won 2-1 by the final whistle. So yeah.

JESSE LINGARD (on for Delph, 73)
Two vital goal-line interventions at either end prove Lingard’s worth as one of England’s most invaluable squad members. To nudge Kane’s shot over the line was largely superficial as the ball was going in anyway, but to clear Vida’s header when Pickford was beaten was crucial. He did more than anyone to send England to long-awaited Nations League glory.

JADON SANCHO (on for Rashford, 73)
He makes things happen. Like embarrassing Dejan Lovren, which will never not be funny.