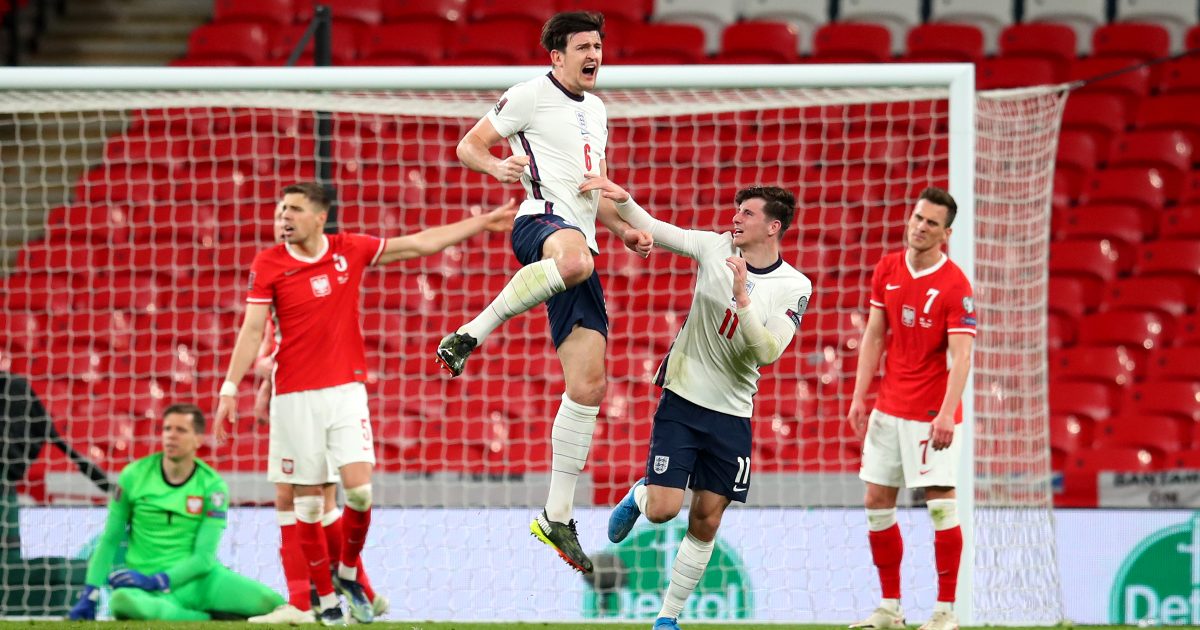 Having coasted to a 5-0 victory against San Marino and triumphed 2-0 in Albania, the Three Lions rounded off this month’s triple-header by edging past their biggest Group I rivals.

England had looked on course for a comfortable win when skipper Harry Kane fired home from the spot during a commanding first-half display, only for dawdling Stones to be caught in possession shortly after half-time.

Brighton’s Jakub Moder robbed the defender and lashed Poland level, only for Maguire to secure a hard-fought victory when superbly firing home from a Stones header five minutes from time.

It was a let-off for the recently recalled Manchester City defender and Southgate, whose side will next line-up at Wembley in their European Championship group opener with Croatia on June 13.

This was the final chance for the Three Lions boss to fine-tune his selection before naming his squad in late May, so the decision to make just one change from the win in Albania was noteworthy.

Keeping with a four-man backline, England dominated the first half without truly exerting themselves and went into the break in the lead after Kane scored the spot-kick won by Raheem Sterling.

Poland looked like a side missing injured talisman Robert Lewandowski, but they improved after the break and capitalised on an awful Stones error as Moder smashed home.

Southgate’s lack of substitutions raised eyebrows but his side dug deep and secured another qualification victory in their final competitive match before the Euros through Maguire’s late half volley.

The only change to Sunday’s side saw Luke Shaw replaced by Ben Chilwell, who was slipped in by Mason Mount in the eighth minute and sent over a cross that Phil Foden headed off target.

England were moving the ball slowly against solid Poland, whose five-man defence were undone by an injection of directness that led to a 19th-minute opener.

Sterling collected the ball and made a beeline for the box, where he went down under pressure from Michal Helik.

The Barnsley defender’s frustration was clear as referee Bjorn Kuipers awarded a penalty, which Kane fired down the middle as Wojciech Szczesny dived to his right.

Sterling was proving a handful for Poland and visiting defender Jan Bednarek twice produced key challenges, getting in the way of a dangerous cross and then halting a jinking run in the area.

Nick Pope did not have a shot to contend with in the first half but his kicking looked shaky at times, while opposite number Szczesny was not having to deal with as many shots as England’s pressure should have led to.

The former Arsenal goalkeeper did well to save a powerful Kane strike from the edge of the box, while fleet-footed Sterling continued to unsettle on the left.

But England’s lack of cutting edge saw Poland grow in confidence after the break, with Pope fouled as Krzysztof Piatek pressured before Maguire breathed a sigh of relief after inadvertently handling in the area.

Paulo Sousa’s side would soon become the first team to score against England this year after a sloppy Stones moment was punished in the 58th minute.

The dawdling centre-back was robbed of possession on the edge of his own area by Moder, who collected a return ball from Arkadiusz Milik and rifled past Pope – the first shot on target the goalkeeper had faced this qualification campaign.

Half-time introduction Milik headed wide as the hosts struggled to regain their composure, with Kane lunging at Szczesny and Foden seeing a shot from an acute angle saved as they attempted to kick-start things.

Foden hit the wall with a free-kick he so impressively earned and Poland captain Kamil Glik blocked a Mount cross as the match moved towards the closing stages.

England’s lack of changes was unusual but Southgate’s side found a way. With 85 minutes on the clock, Stones headed back for Maguire to smash past Szczesny.

The relief on the Three Lions bench was palpable but there were still some nervy moments, with Rafal Augustyniak lifting over in stoppage time.