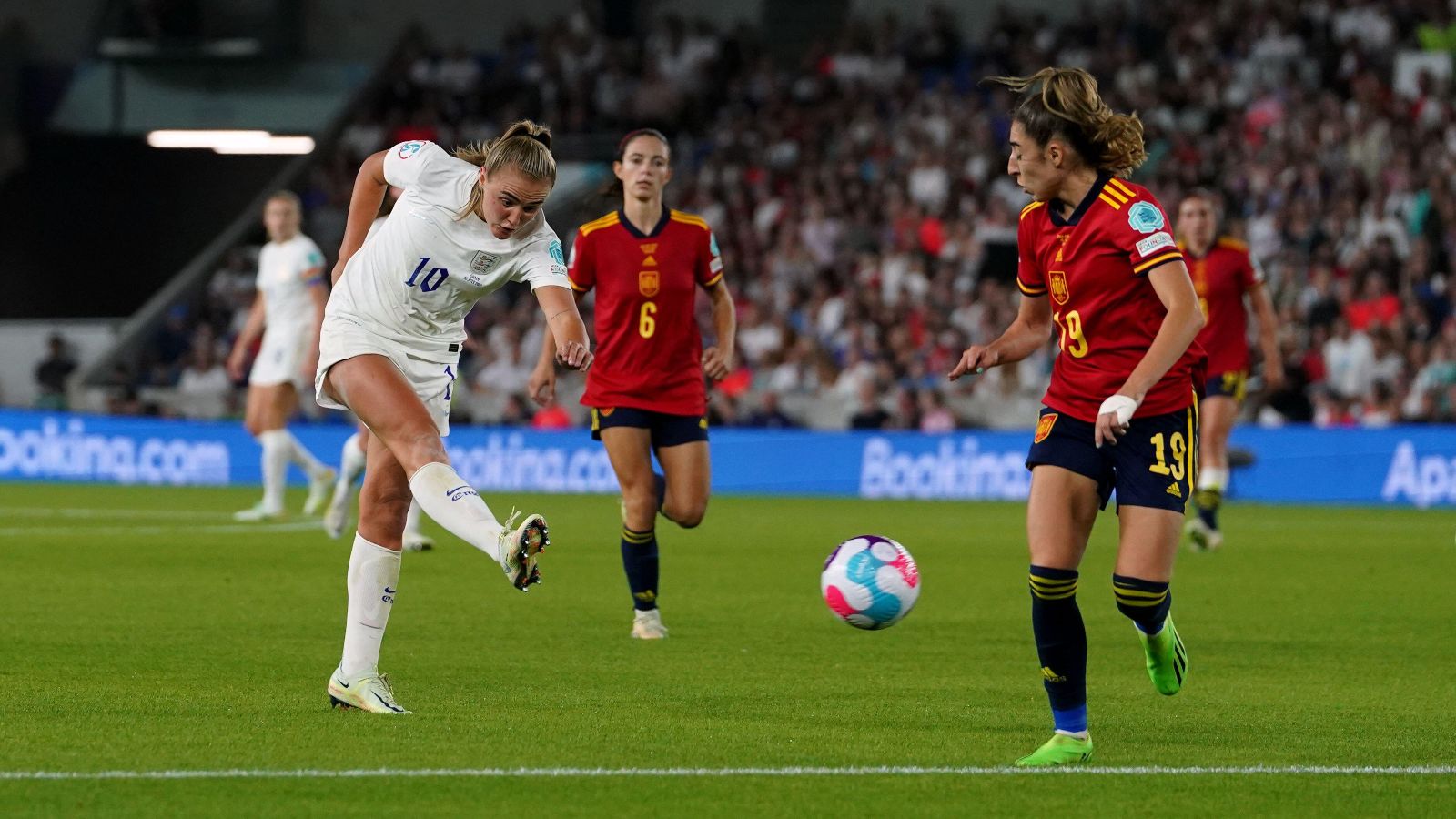 The Lionesses looked in trouble as Esther Gonzalez gave Spain the lead just after the interval. Ella Toone equalised in the 84th minute though after being set up by fellow substitute Alessia Russo.

Stanway then netted a stunning goal in extra-time as England secured a place in a fourth successive major tournament semi-final.

England women are superb but they are all white: Why? And should this be ‘fixed’?

The Lionesses, Euros runners-up in 1984 and 2009, will now face either Sweden or Belgium in the last four at Bramall Lane next Tuesday as they continue their quest for a first major piece of silverware.

After scoring 14 goals without reply across three group-stage victories, Wiegman’s side showed impressive fight to emerge victorious this time on their return to the venue where they had last week, in the second of those games, recorded the biggest win in Euros history by demolishing Norway 8-0.

The boss was every one of us 😍 pic.twitter.com/6dpCMjpqHb

England had Wiegman back in the dugout after her absence for last Friday’s win over Northern Ireland following a positive coronavirus test, and the same starting line-up once again as they had throughout the group games.

Jorge Vilda’s Spain – ranked one place higher than England at seventh in the world, and without star names Alexia Putellas and Jennifer Hermoso at the tournament due to injury – had a line-up showing four changes from the 1-0 win over Denmark that saw them secure second place in their group, with the match-winner on that occasion Marta Cardona among those coming in.

England found themselves under pressure early on as Cardona put an effort wide at the far post in the seventh minute.

Ellen White glanced a header wide at the other end, with the flag going up for offside, before further attempts on the Lionesses’ goal saw Mariona Caldentey curl a shot into Mary Earps’ arms and Patricia Guijarro head off target.

There had been plenty of talk in the build-up to the contest about Spain’s possession-based game and, in contrast to England’s group matches, it was their opponents having more of the ball as Olga Carmona drilled wide and Aitana Bonmati sent an effort high into the stand.

The hosts then suddenly looked to have taken the lead in the 37th minute, White firing in when the ball came to her following a Lauren Hemp free-kick – but again the striker saw the assistant referee’s flag raised for offside, and a VAR check confirmed the effort would not stand.

Despite that verdict, England appeared encouraged and a subsequent attack ended with Hemp heading wide.

The second half then began with a brief interruption as a pitch invader was tackled by security and led away, before White diverted an attempt wide while off-balance, with the offside flag again going up.

Moments later, Spain grabbed the lead when Athenea Del Castillo, a replacement for Cardona at the interval, got the better of Rachel Daly and laid the ball to Gonzalez, who turned and struck past Earps.

Wiegman responded by making a double substitution, sending on Russo and Chloe Kelly for White and Mead and, after penalty appeals were dismissed by referee Stephanie Frappart when Hemp went down in the box, Toone also entered the fray, replacing Fran Kirby.

Spain then went close to doubling their advantage as Del Castillo lofted the ball from the right and Earps was just able to push it away.

Daly saw a shot gathered by Panos soon after and Hemp subsequently struck over as England’s frustration continued.

With tension around the stadium rising as the end of normal time drew near, the equaliser then arrived as Wiegman saw her changes pay off, Russo winning an aerial challenge with Irene Paredes and Toone firing past Panos to send England fans into raptures.

While the Spanish bench made their unhappiness about it known, the goal was given and the contest subsequently went into an additional 30 minutes.

Stanway then caused the Amex to erupt once again as she drove towards the box and unleashed a wonderful shot from just outside it that flew past the diving Panos into the net.

Amaiur Sarriegi sent a shot just wide of Earps’ goal just before half-time in extra-time, but Spain were unable to force a shoot-out and, after chants of “football’s coming home” rang round the stadium, England fans went into full party mode as the final whistle confirmed the Lionesses’ progression.