Home Competitions Euro 2016 England 2-1 Turkey: How did they do? 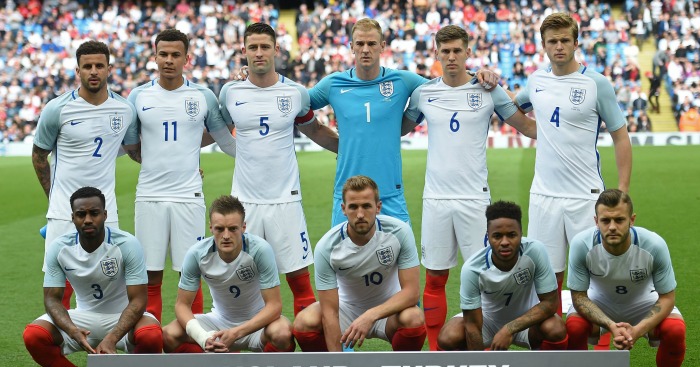 Joe Hart: Shared the blame with Danny Rose for Turkey’s equaliser, and Hart’s desire to be the hero is something that lingers at the back of my pessimistic mind. He is a goalkeeper comfortable with coming far out of his goal to thwart danger, but – and Manuel Neuer suffers in the same way – it can occasionally make him look very foolish. Still, a magnificent save at the death to secure victory.

Kyle Walker: Still worry about Walker as a defender (Clyne is certainly better in that regard), but full-backs are increasingly judged on their intent going forward. If Hodgson does opt for two central strikers, that probably means no room for Raheem Sterling, and thus the full-backs provide the width. This is where Walker wins.

Danny Rose: Are we allowed to be concerned about Rose’s defending on the evidence of one game? Probably not, but Tottenham’s left back was so flat-footed for Turkey’s equaliser that he was in danger of setting down roots. Ryan Bertrand still has the chance to start against Russia, despite Rose’s adventure going forward. Unfathomably named Man of the Match by Glenn Hoddle, which was still only about the sixth weirdest thing he said during the match.

Gary Cahill: The player about whom the fewest notes were made mid-match; it was ever thus. While John Stones and Eric Dier lost their man at set pieces, Cahill did not suffer the same self-inflicted fate. More clearances than any other player on the pitch but no tackles made, Cahill was the ‘sitter’ while John Stones stepped out to intercept the ball (five times vs Cahill’s one). It actually worked quite well until everyone looked panicky at the same time.

John Stones: England’s only reserve central defender, and there’s nothing we can do about it now. Stones did not make any notable errors other than losing his marker for a second-half corner, but has an annoying knack of sending his clearances only 20 yards out of the penalty area and to an opposition player. Occasionally marauded out of defence to make his backers cheer, but England have plenty enough to be dangerous in the final third; it’s the defending we’re most worried about.

Eric Dier: Twice lost his man on set-pieces, and England were fortunate that Turkey took advantage of neither situation. Yet it’s hard to be too critical of Dier, who must have cried out for some support when both full-backs, Dele Alli and Jack Wilshere were all advanced. The arrival of Danny Drinkwater understandably eased the workload. Given his trick of getting onto the end of corners in the opposition box, Dier will be worth a (probably wasted) £2 each-way first goalscorer bet in each of England’s matches in France. Thank (or curse) me later.

Jack Wilshere: A game to determine his fitness more than form, and Roy Hodgson must have gulped during the first half when he saw some of the Turkish challenges flying in. Yet this is the problem with choosing a player with so much still to prove after injury: England have two games before the tournament begins, yet Wilshere is still taking only tentative steps to full match fitness. Glimpses of excellence (including a sharp shimmy and first-half shot) and proficient passing, but just not enough to make you purr.

Dele Alli: Slightly disappointing, for the first time in an England shirt. Having been treated to Alli jinking past players in central midfield and finding teammates with crisp, probing passes on his other England showings, this was a little more reserved. Magic footwork for the opening goal, but that was the peak of Alli’s match rather than a precedent. Also, that temper is going to get him into trouble at some point. We want determination and hunger, but not pumped-up stupidity.

Raheem Sterling: Played a part in the opening goal, and was fouled on numerous occasions as Caner Erkin struggled to halt his progress. Unfortunately, Sterling is now being judged from a default position of negativity, as if he must prove his critics wrong in order to justify a place, but he’s still England’s quickest attacking player and therefore potentially most dangerous. At 21, let’s let him breathe a little bit. Completed six dribbles, more than any other player on the pitch, despite his early departure.

Jamie Vardy: Having been told that we would finally get to see Vardy and Kane as a partnership, the Leicester striker was promptly farmed out left and looked about three times less effective than he does centrally. Vardy’s enthusiasm to chase lost causes might be useful in a wide role, but he was otherwise hampered by the tactical switch. Moved into the centre with 25 minutes remaining, Vardy won a penalty and scored the winner. 4-4-2 diamonds could be forever (or at least this summer).

Harry Kane: Took his goal expertly – although from an offside position – but otherwise this was a frustrating game for the Premier League’s top scorer. Kane’s confidence in his own shooting is wonderful, but began to slightly wear after the fourth shot off target from 25 yards. Kane ended up playing the Wayne Rooney role of trying to do everything and doing a lot of it quite badly, but it being okay because he scored. Missing a penalty is at least good preparation for a major tournament, but the free-kick thing needs to stop.

Jordan Henderson (on for Wilshere, 66): Oh yeah, Henderson came on. Didn’t get injured, which is nice. Needs to start the next two games to even begin to justify selection against Russia.