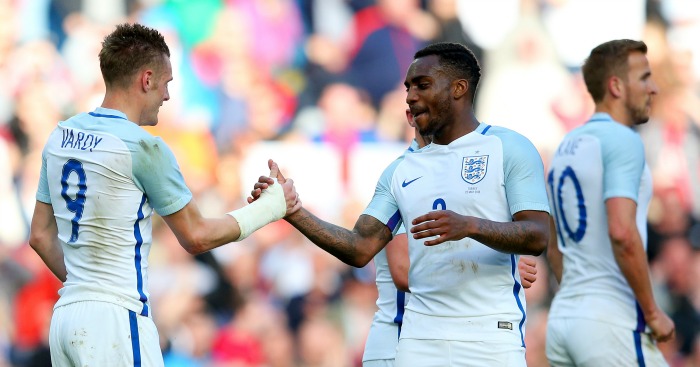 England began their Euro 2016 preparations with a hard-fought, if not entirely convincing, victory over Turkey in their first home match on the road in nine years.

Fresh from this week naming a provisional 26-strong party for France, Roy Hodgson’s men played the first of three warm-up matches at a sparsely-filled Etihad Stadium.

There were more people at Wembley for non-league day, but the 44,866 in Manchester saw a competitive encounter, with Jamie Vardy’s close-range strike sealing a 2-1 win in England’s first match away from their London home since 2007.

The friendly was far tougher than it looked like being after the hosts raced into a third-minute lead, with Dele Alli’s quick feet putting through Harry Kane to coolly slot home, with the assistant failing to flag for a clear offside against the Tottenham striker.

Fatih Terim’s visitors quickly rallied, though, and raised fresh questions over England’s defence by all too easily getting behind the backline and drawing out Joe Hart as Hakan Calhanoglu turned the ball home.

Turkey were unfortunate not to add to their first ever goal against England, but were unable to beat the Three Lions at the 11th time of asking as Vardy netted late on.

The Leicester striker fired home from close range after Kane’s penalty miss did not cost England on a day when Hodgson’s side rode their luck at times.

Despite being without Manchester United and Liverpool players, with the exception of Jordan Henderson, the England boss was able to select a strong side as Jack Wilshere made his first international appearance since June – and just his second start of the season for club or country.

Vardy and Kane led the line having managed an impressive 49 league goals between them this term and quickly proved a nuisance, with the former centimetres away from latching on to the latter’s pass after 35 seconds.

Alli met a pass from Manchester City winger Raheem Sterling with wonderfully quick feet, directing the ball between Mehmet Topal’s legs and through for Kane to coolly slot home.

The goal should have been chalked off for offside and Turkey boss Terim pointed that out to the fourth official, seemingly showing him a replay of the incident on his phone.

Ozan Tufan was denied by a timely Kyle Walker block and Cenk Tosun’s near-post drive was kept out by Hart as the visitors looked to draw level, which they managed as England’s defence was all too easily opened up.

Volkan Sen raced behind Danny Rose and drew out Hart, whose poor positioning was capitalised on when the ball was cut across for Calhanoglu to sweep home a historic Turkish goal.

It was an embarrassing effort to concede and one which appeared to jolt England into life, with Wilshere cutting in from the right, darting between two players and hitting a low shot that Volkan Babacan got down well to save.

Eric Dier met the returning Arsenal midfielder’s corner soon after, but the match-winner in Germany in that memorable friendly in March saw a similarly powerful header ripple the side-netting.

Kane, who had failed with a couple of free-kicks, cut in and saw a low strike saved, then flashed well wide as half-time approached.

Two deflections took the sting out of an Alli attempt moments after the restart, with Kane finding the net again only to this time see it ruled out for offside.

At the other end, the visitors were threatening with worrying regularity as Tosun lost his marker to head Calhanoglu’s corner wide.

Besiktas striker Tosun fizzed wide after turning wonderfully on the edge of the area before another Calhanoglu corner caused problems and Rose was forced to turn behind.

Henderson was now on for Wilshere and England were playing with a two-pronged attack rather than Vardy out wide, which looked to have paid dividends in the 72nd minute.

Racing on to a through ball the Leicester striker went down under pressure from Turkey captain Topal and referee Deniz Aytekin pointed to the spot, with Kane stepping up only for his powerful strike to hit the left post and go wide.

It was an exasperating moment that did not cost his side as captain Gary Cahill rose to meet an 83rd-minute corner from the Tottenham striker. Babacan’s save was impeded by his team-mate and Vardy reacted to rifle home from an acute angle.

There was an air of relief following Leicester striker’s third goal for his country, with Hart having to produce a wonderful one-handed save to deny Olcay Sahan a stoppage-time leveller.