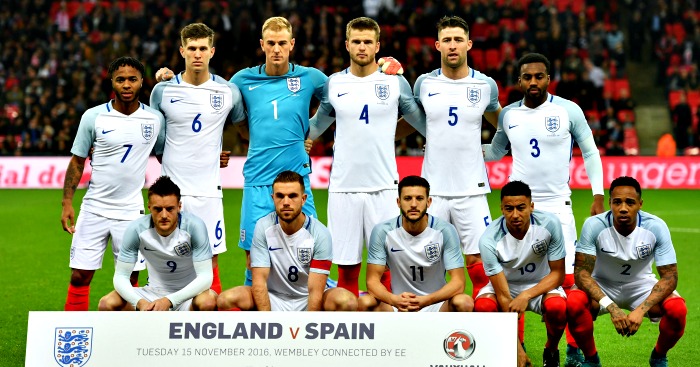 JOE HART: Didn’t shout in the tunnel or punch any walls. Had no meaningful save to make but his distribution – bypassing the Spain press with searching balls into midfield – was comforting to watch. Pep would have been furiously shaking his head with disapproval. And England conceded twice after he was substituted, so that’s something.

NATHANIEL CLYNE: Defensively, he was fine. Spain found little luck down Clyne’s right-hand side, as the Liverpool full-back transferred his club form to the international scene. More questions can be asked of the 25-year-old offensively however, as a number of England counter-attacks were thwarted by his poor first touch or a slight delay in his decision-making. It remains difficult to separate him and Kyle Walker.

GARY CAHILL: This always happens. Gary Cahill starts and plays the majority of a match, and yet I write absolutely no notes on his performance. Much like a referee, the Chelsea centre-half is at his best when he goes unnoticed. The statistics tell us he made one interception and one clearance, while his pass accuracy of 94.1% was the highest of any player in an England shirt.

JOHN STONES: The accepted wisdom is that John Stones has the perfect manager at club level to help harness his ball-playing abilities. Perhaps the same can soon be said for his boss on the international stage, too. The Manchester City centre-half still takes risks in possession, but he was robust, forceful and authoritative in the tackle. Is it the Southgate influence? Who knows. But the 22-year-old is at least showing signs of progression, development and learning; eight clearances, three tackles and two interceptions say so.

DANNY ROSE: It’s strange to think that the Tottenham defender was considered Ryan Bertrand’s equal on the international stage not long ago. Rose has truly embraced the challenge of taking the regular left-back mantle as his own, providing width and solidity on the flank. Luke Shaw faces a bloody big battle to claim his spot back. And England conceded twice after he was substituted, so that’s something.

ERIC DIER
For 94 minutes, he was fine. Just fine. He manned the midfield, offered a passing option to the defenders, and tracked the Spain runners. Then the Isco thing happened. For a defensive midfielder who has spent much of his career at centre-half, letting his marker evade him so easily to score is borderline criminal.

RAHEEM STERLING: The positive performances are becoming so commonplace that it was somewhat disappointing to see Sterling regress in the second half. In the first, the Manchester City winger was an absolute delight, making incisive runs, bursting past opponents with pace and brushing them off with strength and skill. But the most striking part of his continued development is his decision-making, with a couple of low, driven crosses troubling the Spain defence. The footie idiot is regularly displaying an awful lot of football intelligence.

ADAM LALLANA: We keep saying it, but we really do mean it: Thank you, Jurgen. Lallana set the tone in defence and attack, relentlessly chasing the opposition down when out of possession and, when Spain were bullied into relinquishing the ball, using it to perfection. His curved pass into Jamie Vardy was inch-perfect, and he dispatched the subsequent penalty with confidence. It is a massive shame that injury restricted him to just 27 minutes.

JESSE LINGARD: Busy. Sharp. Tidy. Neat. These are the words that will be used to describe a Jesse Lingard performance which screamed ‘seven out of ten’. Which is fine, because the Manchester United forward pressed well, passed with purpose and combined effectively with his teammates. He was great. His international future does not lie as a No 10, but he is a serviceable squad option. And there’s nothing wrong with that whatsoever.

JAMIE VARDY: The first half was terrible. The Premier League winner resembled a competition winner as he miskicked, miscued and mishapped his way through a mistake-riddled opening period. The early tackle on Cesar Azpilicueta was as high and dangerous as his skewed attempt with the outside of his boot on 25 minutes. His only positive contribution, winning the penalty Lallana converted, was borne from the horrible first touch of a player clearly lacking in confidence.

So Vardy deserves immense credit for his improvement in the second half. His well-taken header marked a first goal for club or country since September 10, while he was robbed of an assist only by Theo Walcott’s errant finishing shortly after. His international career might well have been hanging in the balance after that first half; he managed to rescue it before his removal after the hour mark.

THEO WALCOTT (for Lallana, 27): Why did Theo Walcott waste a large portion of his career pretending to be a striker? The Arsenal forward had three shots – no player had more – yet his attempts were either too weak, poorly-placed, or a combination of the two. The thing is, he scores the chance Vardy provided him early in the second half if he is playing for Arsenal in a routine win over Sunderland or Hull.

TOM HEATON (for Hart, 45): Far busier than Hart, but Heaton will have felt comfortable facing a constant onslaught on his goal. Iago Aspas’ strike would have been too much for most goalkeepers, but Isco’s late equaliser was preventable. Therein lies the reason that he is not England’s No 1, despite Burnley fans’ protestations to the contrary.

PHIL JAGIELKA (for Cahill, 45): Stop calling up 34-year-old centre-halves who aren’t good enough to play at this level. Cheers.

ANDROS TOWNSEND (for Sterling, 65): He’s great, isn’t he? Some questioned his inclusion in Southgate’s squad, claiming that he is not even the best England winger at Crystal Palace. But that misses the point entirely. The 25-year-old has earned his place in the international fold through his international performances. He can be trusted to do the job, basically. And with two tackles, two interceptions and three dribbles in under half an hour, he did just that.

MARCUS RASHFORD (for Vardy, 68): Fast, isn’t he? Direct, isn’t he? It was quite nice to see the teenager feature as a central striker, and he almost reaped the rewards after rounding Pepe Reina, but he ran the ball out of play. Ceded possession for Spain’s opener, a crime which he knows would be punished with a public haranguing were it committed at club level.

AARON CRESSWELL (for Rose, 79): Congratulations on the deserved debut. Commiserations on the defence conceding twice in the 16 minutes you played, having kept a clean sheet for the previous 79. Cresswell was not at fault for either goal, but it does not reflect well.