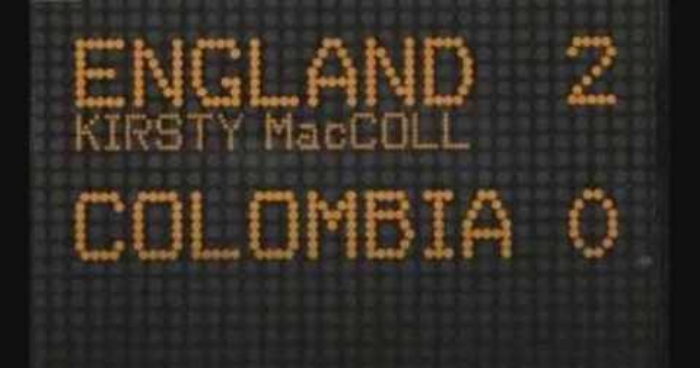 Assuming you’re of the right age, you can probably remember where you watched England face Colombia the last time they played each other at a World Cup – in 1998. You might have been in a bar, perhaps at home with family and friends, or maybe you were in Lens to watch David Beckham’s perfect free-kick and get watercanonned by the local gendarmes.

Kirsty MacColl was in a pub in north London, on a date that went quite badly. As it turns out, the bloke was married with kids, something she only discovered after being told by one of his friends. We know this because she wrote a song about it: ‘England 2 Colombia 0’ is maybe the best song ever about a football match, although it isn’t really about a football match.

If you’re not familiar with the song, now’s the time to rectify that. And, indeed, the rest of her discography: everyone knows MacColl from ‘Fairytale Of New York’, but beyond that she put out five albums of mostly brilliant pop music, full of hooks, choruses and sometimes beautiful, sometimes pretty sad lyrics. “I got sick of men writing songs about how they thought women felt,” she once said. “I wanted to write about how it really was.”

On this occasion, what it really involved was a would-be adulterer, who she had met a short time before and was very excited about stepping out with. The song tells the relatively simple tale of her evening, going to the pub in Belsize Park, watching the game and eventually being afforded the mercy of the man’s friend, who told her the truth: he had a wife, he had children, and thus had no business on a date with someone else. Even apart from the obvious deceit, it doesn’t really sound like much of a date: down the boozer with some bloke and his mates, watching In-gur-lund.

And there’s no artistic license taken in the telling, either. “There aren’t many stories around it, because it’s all in the song,” says Dave Ruffy, MacColl’s long-time drummer and co-producer (with Pete Glenister) of the song and the album ‘Tropical Brainstorm’. “It was warts and all.”

Here’s the remarkable thing: she wrote the whole song in the few hours between the date ending and showing up to the studio the next morning where she was working on the theme to a TV show called ‘Picking Up The Pieces’.

“I remembered she was excited about this date, so the next day I asked how it had gone,” says Ruffy. “She said ‘well, you can listen to this song I’ve written about it.’ We embellished it later, but she basically had the song. She told us the story, in a way that only she could do. It was brilliant. I don’t know who the guy was – she wasn’t going to name and shame him.”

The night, and the lyrics to the song, seemed to be reflective of her life around that time. “Although musically it was all going really well, personally she was in bits at the time,” said Glenister in ‘Sun On The Water’, a book written by her mother Jean. “I’d say her absolute lowest time. If you listen to that song, you’ll hear that we kept most of the vocal from the demo. You can hear she’s nearly crying.”

“You could never get it better because it’s so real,” said Ruffy in the same book. “It was recorded when she felt it, and it really came over. She was very honest, but not unkind. She knew that life is hard and she didn’t dress it up in sentimentality.”

After her marriage to producer Steve Lillywhite ended in the mid-1990s, and partly inspired by an old record of Latin music her father (folk singer Ewan MacColl) had given to her, MacColl spent many years travelling to Cuba and other countries in the region, often going there when the British winters became too grim. ‘Tropical Brainstorm’ was a product of those trips, a record of Latin American-influenced songs, and the sort of album an artist makes when they decide to simply do what they like.

For her whole career, assorted record labels had attempted to shape her into what they thought she should be: by the late 1990s she simply decided to cut that cord, funded the recording process herself and made the music she wanted.

‘England 2 Colombia 0’ is one of many brilliant songs in her back catalogue, but it might be the one that sums her up the best. Her lyrics were, by all accounts, generally a pretty accurate reflection of her personality: funny, with a no bullshit exterior that masked a deeper fragility. “She was quite tough in many ways, but she was also vulnerable, and covered it with a facade of toughness,” said guitarist and frequent co-songwriter Mark Nevin, in a BBC documentary about her life.

All of that is in this song. “She was a woman who didn’t suffer fools, but at the same time she was easily hurt,” says Ruffy. “She found happiness after the songs were written [with musician James Knight], but she’d had a pretty rough time of it for a couple of years.”

It also features MacColl’s trademark, what she called a “one-woman Beach Boys” act, where she would create harmonies, singing all the parts herself: essentially making chords with her voice. For a few years in the 1980s it was a skill in demand, appearing on Smiths and Billy Bragg songs, among others. “It was her thing,” says Ruffy. “She knew exactly what notes she was going for, and would come up with this beautiful choral, chords thing.”

After ‘Tropical Brainstorm’ was released she was the happiest her friends had seen her in years, professionally and personally. She was in love, had mostly got over the stage fright that had seen her avoid touring earlier in her career, and was looking forward to her next album.

But the next album never came. Just before Christmas 2000, she was scuba diving off the coast of Mexico with her sons, Louis and Jamie. A speedboat owned by a wealthy businessman called Guillermo Gonzalez Nova sped through an area supposed to be protected for divers. She pushed her boys out of the way, but the propeller struck her. She was 41.

Simply remembering Kirsty MacColl for a tune loosely about a football match isn’t sufficient for a songwriter and singer of her genius. But it’s a decent place to start.

“I miss Kirsty,” says Ruffy. “She was a generous soul.”