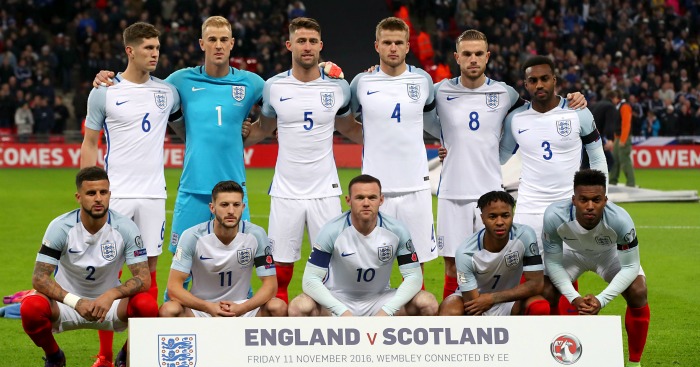 JOE HART: Solid, without ever having to make a save that he couldn’t have made with both arms tied behind his back. Hart deserves credit for dealing with his centre-backs’ insistence on showing off their It’s A Knockout-style playing out from the back, and was calm throughout. However much you rate Tom Heaton, Hart’s going nowhere for now. This made it clean sheet number 38 in just 67 caps.

KYLE WALKER: Is there anyone not living in a Liverpool postcode who thinks Nathaniel Clyne is better? Walker is not the perfect defender, and may still be found out against top-class opposition, but his marauding forward runs add a dynamism to England’s play that is so often lacking. His anticipation and cross made the first goal to set England on their way.

DANNY ROSE: Lucky not to concede a penalty for a challenge on Robert Snodgrass, who did cause him the odd panicky moment, but hardly a bad performance from a full-back who shares Walker’s keenness to get forward. With Luke Shaw currently being Jose Mourinho’d, Rose has this place in his pocket if he wants it.

JOHN STONES: Excuse me, can you just pass me that record? Yes, that one, the broken one; I’m going to stick it on again. Watching Stones, it’s impossible not to think that he will be a damn fine central defender when he learns to defend. Until then, we’ll enjoy the strides out of defence and have kittens every time he’s put under pressure. Gave the ball away twice in the first ten minutes and was three times dispossessed, but saved his finest moment for a laissez-faire approach to marking from corners. Only Grant Hanley’s ineptitude saved his blushes. You can take off the record now, but I need to labour the point: He just won’t get away with this against better teams.

GARY CAHILL: Improved at Chelsea in a back three and better than his central defensive partner on Friday, but the errors have still not been entirely ironed out. At 30, it’s probably too late for that to change. Booked for pulling back his man after losing possession, meaning he will be suspended for Lithuania in March. Still, he did score his first England goal for over two years. And a rest in March will go down well with Antonio Conte.

ERIC DIER: Here’s the thing with Eric Dier. Given time on the ball, he is a Rolls Royce holding midfielder, a clean-shorted passer with the consummate style to match his prep school head boy image. But as soon as Dier comes under serious pressure, I put my hand over my eyes and wince and I suspect the rest of the country does the same. Sold a dummy by James Forrest that had him looking in three different wrong directions, Spain come next week. It’s difficult to overstate how much of a step up that will be.

ADAM LALLANA: Brilliant. I worried whether shoehorning Lallana back into a wide position would curb his Liverpool enthusiasm, but there was so much interchanging of positions by England’s front four that Lallana was able to perform a similar enough role to club level to enjoy himself. Not only was his drive from midfield at a level above any other player in the match, he also scored his second goal in two internationals having gone 26 games without. Thank you, Jurgen.

RAHEEM STERLING: Possibly fouled for a first-half penalty and constantly troubled the Scotland full-backs, but Sterling did display that rough edge that occasionally lets him down, epitomised by his poor miss late in the game. That said, it’s only four months since The Sun were demonising him, so you’d forgive a 21-year-old Sterling for taking time to re-find his international feet.

WAYNE ROONEY: ‘The big man is back,’ exclaimed one hyperbolic newspaper journalist on Friday morning, but we really don’t need to keep lurching from one extreme to the other with Rooney. He’s just fine, and that might be the biggest insult of them all. Rooney was the least effective member of England’s front four, though in no way awful. Just fine. Fine. What wasn’t fine was throwing his hands in the air for a free-kick rather than tracking the Scotland player who had dispossessed him in the first half. It could have cost England an equaliser.

DANIEL STURRIDGE: There were still a few social media moans about Sturridge’s tendency to drift from his central striker position but, sorry, that’s exactly what you should expect – that is Sturridge. Perhaps he didn’t see as much of the ball in dangerous areas as he would like, but the header for England’s first goal was sublime. One of those finishes that looks far easier until you’ve tried to replicate it.

JAMIE VARDY (for Sturridge, 75): Did some running. When was the last time England only used one substitute in a match, eh?

Please help us out and vote for Daniel in the FSF Writer of the Year award. Won’t take a minute.