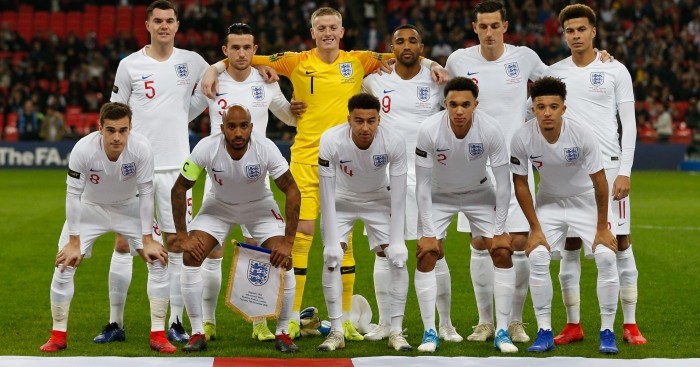 JORDAN PICKFORD
A pleasingly drama-free 45 minutes from England’s all-action No.1. Rarely pressured in possession with USA retreating deep so there was never likely to be any repeat of his brain fart which should have cost England a penalty in Seville last time out. When Christian Pulisic burst through in the 24th minute, Pickford stood deep and big to deny USA a goal to cling to. Lewis Dunk owes him a drink.

TRENT ALEXANDER-ARNOLD
How’s your finish, lad? It was quickly evident that most of Alexander-Arnold’s work would be done on the front foot, which is where the Liverpool youngster is happiest. His goal, England’s second, was a tantilising glimpse of the future, with Sancho teeing up Alexander-Arnold, though the 20-year-old had to check his run somewhat making the finish – an arrowed drive into the far side netting – even more impressive. Defensively, Alexander-Arnold was lucky to avoid paying the price for playing piggy in the middle between Bobby Wood and a split pass from midfield early on, and on one of the few occasions Christian Pulisic stayed wide, the England full-back was caught out trying to shepherd the ball out of play. But otherwise, a composed-yet-dynamic performance earned him the man of the match award.

LEWIS DUNK
The Brighton centre-back had the best pass completion rate (96.2%) of any England starter, which is hardly surprising given USA refused to press the hosts’ back four in possession. But one pass should have cost England, when Dunk shanked a big diagonal in the 24th minute to Pulisic. Dunk then missed his tackle when trying to make amends and only Pickford’s block stopped England conceding a needless deficit.

MICHAEL KEANE
While Dunk was throwing himself in vain at Pulisic’s feet, Keane was stood with his hand in the air appealing for an offside which was never coming. The only other occasion Pickford was troubled came when England lost possession in their own half with the centre-backs’ shield AWOL. This cap was just reward for Keane for fighting back resiliently to win back his place at club and international level, though neither John Stones nor Harry Maguire will be losing much sleep.

BEN CHILWELL
The Leicester left-back set the tone for his night by bursting into the USA box and flashing a ball across the face of goal before the clock had ticked over to 20 seconds. On his fourth England appearance, Chilwell was efficient in his defending and penetrative going forward, regardless of who was playing ahead of him. The liklihood is that Luke Shaw will return when Gareth Southgate puts out the first team against Croatia on Sunday but Chilwell’s form means either could start and England would be equally strong. Which is wonderful given Ashley Young had so little competition for his place at the World Cup.

FABIAN DELPH
The captain summed up his side’s confidence on the half-hour with a flick on the halfway line into Keane’s feet but his USA counterpart Wil Trapp ensured Delph’s smugness didn’t last long when he thundered into the Man City midfielder in England’s half, setting up an opportunity for Pulisic. Only when Delph wasn’t at his post on Keane and Dunk’s toes did they look in trouble and after switching to left-back, the 28-year-old chucked in an assist with a near-post cross for Wilson to convert. A handy, unremarkable performance from a handy, unremarkable player.

HARRY WINKS
On the right of midfield, Winks was neat and tidy. And that’s it. For those of us standing by to be impressed by the 22-year-old, the wait goes on. Yes, this was just his third appearance having struggled with injury over recent seasons and Winks was among England’s most impressive performers in Spain a month ago. But in a different type of game, where the onus is on England to break down the opposition, Winks offered little adventure or creativity. Perhaps that isn’t his game – being involved in only three goals throughout his senior career suggests not – but the England and Spurs squads are chock-full of midfielders who can play simple. On the one occasion Winks did burst forward in the first half, his touch and shot was that of a player wholly unfamiliar with his surroundings.

JESSE LINGARD
Got England going with a sublime finish which bore more than a passing resemblance to his World Cup strike against Panama. Lingard exchanged flanks with Sancho regularly and USA could not fathom their runs down either inside channel. This needs to be the performance to kick-start his season, at international and club level.

DELE ALLI
The Spurs playmaker was comfortably England’s most experienced starter, with Alli possessing a third of the XI’s 94 caps. But, like Lingard, the playmaker missed the Spain trip and needed a decent night to lock in his place in Southgate’s mind for Croatia on Sunday. Also like Lingard, Dele Alli did enough, combining with the Man Utd attacker and Chilwell to make the left flank England’s most productive route to goal during the first half. Withdrawn on the hour with Sunday in mind.

JADON SANCHO
Given his club form, perhaps we shouldn’t have been surprised at the swagger Sancho displayed on his first England start. But it was still so refreshing to see a teenager, one still relatively unknown to so many English fans, take to the Wembley stage and shine in the spotlight rather than be blinded by the glare. Despite being only 18, Sancho is already far more rounded than so many of his peers and his use of the ball highlighted that maturity beyond his years. The Borussia Dortmund winger enjoyed more touches than anyone else in England’s front five and no one offered more key passes, with one perfectly-weighted nudge into Alexander-Arnold’s path teeing up the full-back for the second goal. Hopefully just a taste of what is to come.

CALLUM WILSON
Only a Rooney goal would have been more warmly received than Wilson’s debut strike, partly because of the Bournemouth striker’s back story, but largely because of his toil upon his first national team appearance. It should have been a dream start but Wilson missed a sitter on eight minutes when he failed to make the required contact with Lingard’s pass, just moments before an unconvincing attempt to earn a penalty at Brad Guzan’s expense. Two more opportunities were passed up but playing as the pivot in this England forward line can be a thankless task. Wilson did the dirty work and just as it seemed that his running and hold-up play would go unrewarded before Harry Kane, Raheem Sterling and Marcus Rashford all return on Sunday, Wilson’s moment came courtesy of a typical near-post finish, shortly before he was replaced with a big cheesy grin on his face. Lovely.

ALEX McCARTHY (for Pickford, 46)
Wasn’t forced into the hassle of making any saves on his international debut with only a couple of crosses dirtying the gloves.

WAYNE ROONEY (for Lingard, 57)
Who cares? This was a night to say thank you to the Three Lions’ record goalscorer, one of the nation’s greatest talents who has taken part in 12 per cent of all the internationals England have ever played. A goal would have topped it off beautifully, but Brad Guzan had to be THAT guy. Cheers, Wayne.

ERIC DIER (for Chilwell, 57)
Did what Dier does. What else did you expect?

RUBEN LOFTUS-CHEEK (for Winks, 69)
Didn’t give the ball away once in the final quarter which will boost the Chelsea midfielder’s confidence after being exiled from the last England squad due to his inactivity at club level.

MARCUS RASHFORD (for Wilson, 79)
Stretched his legs for 10 minutes before Sunday.