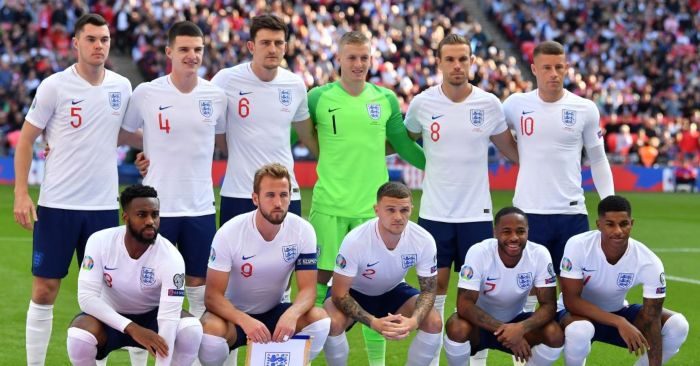 JORDAN PICKFORD
The fine saves when his defence let him down were to be expected, like the firefighter being called to the scene to dampen the embers stoked by those in front of him. But his good short passing under pressure was an added bonus, like taking a break from dusting off the ash to rescue a cat from up a tree. Then he snapped a branch and almost fell with that late ball in between Maguire and the Bulgaria forward. That was thankfully the solitary blot on his report card. A more solid, stable platform at club level has made for a wiser, more mature raver.

KIERAN TRIPPIER
The first Bulgaria chance – hell, the first shot of the game – came as a result of his positional negligence. The fear that Trippier is a wing-back being asked to play a more reserved role at full-back was realised fairly often as his flank, and the spaces he left there, were targeted. It would be fine if his attacking output made that sacrifice and risk worth it, but he created a solitary chance. Trippier wasn’t particularly bad by any means, but this position more than any other is one a player cannot afford to be average in for too long.

MICHAEL KEANE
A booking and the concession of a fair few chances against such limited opposition does not reflect well, although it would be difficult to place culpability on Keane for any particular mistake. He seemed to reprise the Gary Cahill role in these player ratings: the one who you realise you have absolutely sod all notes on and it’s the 85th bloody minute. Neither he nor his partner dominated a relatively poor attack which should have been headed into the next dimension.

HARRY MAGUIRE
One thing that should be said for the two centre-halves is that they misplaced seven of 156 passes between them. Their ability in possession and on the ball should not be questioned here but their inability to maintain concentration levels throughout an entire game is slightly worrying. Maguire looked the most guilty member of a defence he ought to be in charge of organising when Popov headed Bulgaria’s best chance into the arms of Pickford. The brief captain is better than he showed at Wembley, and will know this is the level of scrutiny his value invites. The very definition of a 6/10 display is fine as long as it does not become the norm.

DANNY ROSE
Having looked like he had wilted completely of late, Rose was in bloom on Saturday. He was the game’s biggest winner, creating three chances, completing three dribbles and looking generally more untroubled than his defensive compatriots. His crosses were a little hit and miss and the late booking was regrettable, but this represented a couple of strides forward after numerous steps back.

DECLAN RICE
Some good early covering for Rose at left-back offered a glimpse of Rice at his assured, aware best. A 20-year-old with limited first-team experience would be forgiven for not even considering that part of his remit, so Rice deserves credit for his intelligence. His task was a thankless one but he fared the best of the three midfielders in terms of breaking up opposition attacks. But Rice’s passing, while accurate, was a little slow and predictable when it needed to be faster and more varied. That is merely a slight criticism of an otherwise promising performance.

ROSS BARKLEY
Rice’s main remit was defending and covering for those behind him, which he fulfilled. Barkley’s was to unlock a stubborn, organised defence with short, sharp passing or balls over the top to pacy forwards. The 25-year-old had his moments, notably a fantastic early, long-range pass out wide to Sterling, then the wonderful touch for Rashford’s second-half chance. But they were few and far between against a side that granted him time and space to think – perhaps that was the problem. Such an instinctive player is still learning to make the right decisions when he is allowed to look up and consider his options. Those utterly woeful corners suggest it is an ongoing process.

JORDAN HENDERSON
If that first-half volley had gone in the world might have imploded. So it was a shame that, despite the sweetest of connections, it almost hit the corner flag. That was the European champion’s most memorable moment, such was his relative anonymity. No chances created, no interceptions and a single tackle speaks of a pretty ineffective game. England would have 4-0 with or without him, which is less a criticism of Henderson and more of the belief that a three-man midfield at home to a team of this standard is necessary. The sharing of a hardly strenuous workload will always make it seem that at least one player is failing to pull his weight.

RAHEEM STERLING
Excellent anticipation to intercept goalkeeper Iliev’s pass and create Kane’s first goal, before showing the same strengths to help his teammate return the favour. He was not at his most influential best yet he ended the game with a goal from his only shot and an assist from his only chance created. It is that sort of conversion rate that makes him indispensable.

MARCUS RASHFORD
Justice for Michael Owen. Rashford was excellent, selfless and a constant threat, yet England’s most dangerous forward was the only one to end without a goal. He was unfortunate not to score late on after a great move involving Barkley, and even made the right choice in terms of the finish, but the keeper was equal to it. A player with “a killer instinct” might well have scored. But he showed his qualities as an “all-round player” with a wonderful, underrated touch for Kane’s disallowed goal, an incisive run and turn to win the first penalty, and a positive piece of play to help lay on the third strike. Now to replicate that for club as well as country.

HARRY KANE
It came about 14 months too late, but he finally squared it for Sterling. Those demons have been exorcised. It felt at first as though this would be one of those Kane games: where he barely has a touch before snatching at shots from 20 yards out at ridiculously tight angles. The impatience translated to him not delaying his run for Sterling to play him in for his disallowed goal. But his first strike was a solid finish, his two penalties were expertly converted and it was his hard work off the ball to dispossess Bulgaria – then his great work on it to assist Sterling – that made it 3-0.

Oh, and was that second penalty one of the most aesthetically pleasing ever? Good lord. That poor camera.

MASON MOUNT (on for Henderson, 67)
That shot was hilarious.

JADON SANCHO (on for Sterling, 71)
He seems built for a super-sub role as a fast, skilful forward against tired, susceptible defences. Yet Sancho looks better starting for England than he does emerging from the bench. He really wasn’t great.

ALEX OXLADE-CHAMBERLAIN (on for Kane, 76)
Only two players created more chances for the hosts, and only three made more interceptions. He played 14 minutes. Welcome back.