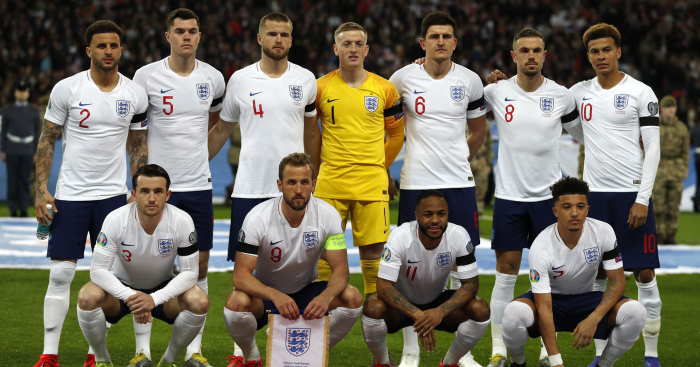 JORDAN PICKFORD
Had no saves to make in the first 52 minutes, then suddenly a couple in the space of 60 seconds. The first, from David Pavelka, seemed routine, but only because Pickford’s positioning and anticipation made it look as such. The 25-year-old also punched a couple of crosses clear in another peaceful performance, earning his sixth international clean sheet.

KYLE WALKER
In a defence that featured one Everton player and two from Leicester, a member of Manchester City’s title-winning, Quadruple-chasing juggernaut looked the most suspect and susceptible to error. Walker played a part in the third goal with a surging run but when he cannot use his pace – such as the two moments in the second half when he was caught in possession close to his own area – he is frustratingly ordinary. The contrast between his relationship with Sancho and Chilwell’s with Sterling on the other side was stark, and England predictably attacked more often (44.9% of the time) down the more cohesive left flank.

This is England’s strongest position in terms of strength in depth, but it looked like their weakest against an underwhelming opponent on Friday. Even Kieran Trippier would have been disappointed.

MICHAEL KEANE
There are certain positions where going almost completely unnoticed is something of a disaster; central defence is not one of them. Keane quietly dealt with any threat both on the ground and in the air, misplacing just three of his 87 passes. Perhaps in part due to his relatively low position in the pecking order, he boosted his prospects more than any other player.

HARRY MAGUIRE
Matej Vydra identified him as England’s potential weak point – and presumably regretted doing so after a particularly unforgiving challenge from the Leicester centre-half towards the end – yet Maguire was anything but. As the more senior defender alongside Keane, he did well in marshalling a defence that gave little to nothing away. Games never usually pass by without at least one moment of indecision or clumsiness from the 26-year-old, but he made sure to keep his hands on the wheel even in cruise control.

BEN CHILWELL
He was little better than above average, and was not required to be. Some heavy involvement in the flowing move that led to the penalty was pretty much the sum total of his offerings going forward, but there is plenty to be said about a player who can make constantly running up and down the touchline look so effortless. He would rival Andy Robertson for energy levels, and is not particularly far from the Scot’s overall level either. With Sterling starting on his flank but often floating into central positions, Chilwell had the entire left side to himself for large swathes of the game. He relished the challenge as much as the space.

ERIC DIER
Spent the build-up to this match tackling the big issues on social media, but that paled in comparison to the two challenges he made in the opening four minutes. two fouls. It was a shame to see such a great, assertive start cut short.

JORDAN HENDERSON
Started well on the right-hand side before replacing Dier as the holding midfielder after a quarter of an hour, yet still managed to crop up on the left in the second half to almost force an own goal with a fine cross. Such versatility is commendable, and he maintained a high level wherever he was asked to play.

Henderson dictated the tempo well, injecting urgency or slowing the play down when needed. It was his pass that helped to instigate the opening goal, and he combined really well with Sancho in particular. The most notable thing about his performance is that he constantly had his head up, looking for the next possible pass instead of receiving the ball, knowing nothing of his surroundings and panicking in possession. His time around better players at Liverpool really has improved him.

DELE ALLI
He was really bloody good, particularly considering this was only his second game in 61 days. Alli is so often conspicuous by his presence, either standing out for his brilliance or his wastefulness. But the most positive aspect of his performance here is that he was quietly effective ghosting into pockets of space, linking well with teammates and even carrying out his defensive duties excellently. His chipped ball into Chilwell in the sixth minute was the first of a few clever moments that included his backheel into Sterling’s path for the penalty. He ended the game with no shots or key passes and just one dribble, but his typical individuality was sacrificed for the good of the team. This was a collector’s item: an economical, disciplined and understated display.

RAHEEM STERLING
There was the fine run for the penalty, the delightful exchanges with Kane, the track back and tackle in the second half with England already 4-0 up. And that is without mentioning the movement and finish for the first goal or the turn and finish for the second. The idea that you make your own luck was proven in the 68th minute when a heavy deflection capped a second hat-trick in three starts for club and country.

Scoff all you want, but he is one of the best players in the world on current form. You can count on one hand the amount of players outperforming him right now. And he is England’s. Sensational.

Oh Raheem. We so fucking backed the right horse.

HARRY KANE
Arjen Robben cuts inside onto his left foot. Lionel Messi lofts the ball into the path of Jordi Alba, who returns the favour with a low cross for the Argentine to score. Danny Welbeck trips over his own feet and somehow still manages to arse the ball over the line. Some footballers have a trademark move, and while Kane’s own low shot across the keeper from an acute angle provides competition, his inch-perfect around-the-corner passes claim the crown.

Tottenham’s poacher has long been England’s gamekeeper, and he dropped deep to incredible effect once more on Friday evening. His ball into Sancho for the opening goal was sumptuous, his penalty was enough to continue a run of fine form, and he should have had an assist after a great second-half run and pass provided Sancho with a gilt-edged opportunity that was blocked on the line. Captain? Fantastic.

JADON SANCHO
He is a man of moments, and almost all of them went in his favour. Sancho wasted a couple of good early opportunities but ensured that would be mistaken for nerves on his first England start with a confident performance thereafter. His first few positive contributions were not dribbles but passes into Henderson on the right and Sterling down the left, but some sensational footwork to take on two players and win a corner just before half-time was a more familiar sight. That was Sancho at his best: relighting a flame that had been threatening to die out as Wembley grew a little restless. Eight minutes later, they had doubled their lead.

He really should have scored when Sterling and Kane combined to leave him unmarked, six yards out with an open goal, but Filip Novak’s block sadly thwarted him. That should do little to dampen spirits that will be as high as ever after an electric showing.

ROSS BARKLEY (on for Dier, 16)
Recovered from the understandable confusion at not replacing Mateo Kovacic to play a part in the opening goal, finding Kane with a short but effective pass between the lines. Barkley’s introduction seemed to spark something in an England side that looked relatively pedestrian and unthreatening beforehand; his impetus and drive was refreshing. Only Sancho (4) created more chances than the midfielder (3), who justified being picked to replace Dier over the more sentimental, narrative-driven choice of Rice.

DECLAN RICE (on for Alli, 63)
There is only so much a defensive midfielder can do to impress after coming on with 27 minutes to play in a 5-0 victory. Up the R…ice.

CALLUM HUDSON-ODOI (on for Sterling, 70)
Yet there is plenty an exciting, explosive forward can do to impress after coming on with 20 minutes to play in a 5-0 victory, like force the concession of the final goal with a great run and shot. Hudson-Odoi was practically dripping in confidence, having as many shots on target in his short cameo as the visitors did all evening, and trying to ensure he would dominate the headlines even as the newspapers went to print. Time to start playing him, Chelsea.