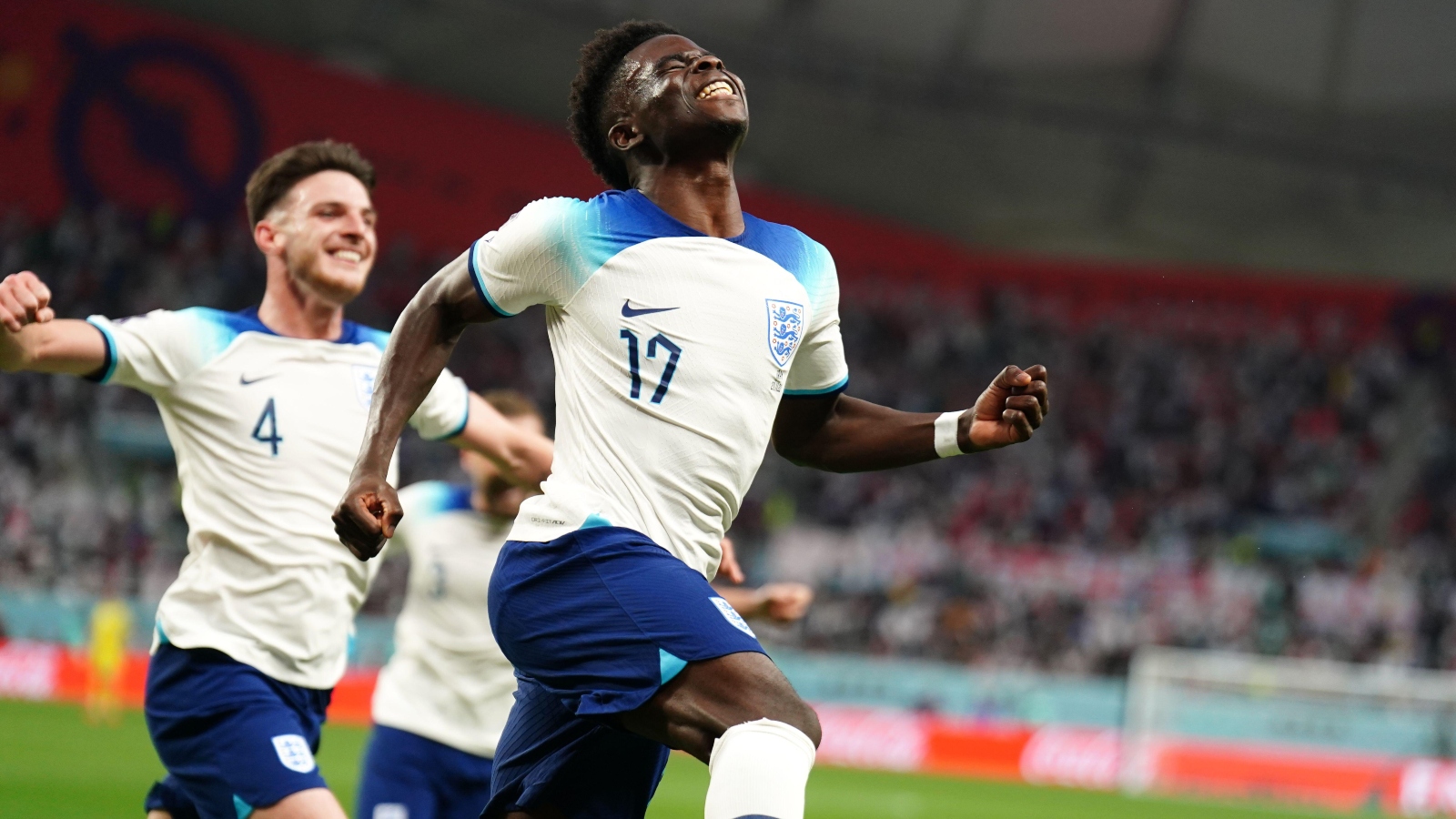 Arsenal winger Bukayo Saka scored a brace on his World Cup debut as England beat Iran 4-1 in their opening fixture in Qatar.

Having reached the semi-finals four years ago and finished as Euros runners-up last summer, the Three Lions arrived among the favourites despite a six-match winless run and Nations League relegation.

England ended that wait for a victory in style on Monday as superb Saka scored twice in his first major tournament appearance since missing his spot-kick in last year’s European Championship final defeat to Italy.

Marcus Rashford has not represented the national team at all since missing his attempt in that shootout and netted within minutes of coming on in a thumping win that Jude Bellingham, Raheem Sterling and Jack Grealish also scored in.

It was a remarkable way to start the tournament, with the Group B opener a night to savour given the challenging build-up to a tournament mired in controversies and questions about hosts Qatar’s suitability.

FIFA cited a technicality to prevent England wearing a rainbow armband in a country where homosexuality is outlawed, while the governing body’s care for fans and players is sure to come under further scrutiny.

There were empty seats at the Khalifa International Stadium due to its shoddy ticketing system and the fact Iran goalkeeper Ali Beiranvand was able to continue before leaving with suspected concussion was appalling.

As a result of that there was 14 minutes of stoppage time at the end of a first half to cherish for Southgate’s side in Al Rayyan. Teenager Bellingham expertly headed home his first international goal before Saka smashed home a stunning strike complemented by Sterling.

Saka added another before Mehdi Taremi scored for Iran, who were relieved that the Three Lions only managed to add two more through substitutes Rashford and Grealish.

England were on course to match their biggest World Cup win, only for Taremi to score a last-gasp penalty.

Former England captain – and Qatari ambassador – David Beckham was among those in the stands on Monday, when Iran’s silence during the national anthem was poignant given the human rights atrocities at home.

The match started with Carlos Queiroz’s normally obdurate side escaping an early penalty as Rouzbeh Cheshmi wrestled Harry Maguire in the box.

More serious controversy would soon follow as Beiranvand was allowed to play on despite having been left groggy after clattering into team-mate Majid Hosseini.

Iran’s goalkeeper soon called to be taken off and eventually left on a stretcher, with Hossein Hosseini brought on as a concussion substitute.

The break in play did not throw England off kilter, with Mason Mount firing into the side-netting and Maguire heading a 32nd-minute corner on to the crossbar.

The floodgates would open three minutes later. Smart, patient play ended with Luke Shaw sending in a great cross from the left that Bellingham headed past Iran’s statuesque back-up keeper.

The 19-year-old lapped up the moment after England’s third youngest World Cup starter was assisted by the man second on the list.

Another goal followed in the 43rd minute when Maguire headed on a corner for Saka to thrash home a left-footed beauty.

It was a magical period followed by stunned silence during 14 minutes of stoppage time.

Iran made three changes after the break but were still struggling to stem the tide, leading to Morteza Pouraliganji’s desperate attempt to halt Kane. The skipper grimaced after the challenge but was able to continue.

Bellingham continued to purr and Sterling sparkled for England, plus Maguire appeared to have the confidence lacking at club level.

The decision to select Saka also proved a masterstroke, with the man-of-the-match scoring his second in the 62nd minute.

A miskick from goalkeeper Hosseini was gobbled up by England and ended with the Arsenal star following quick feet with a low finish.

Iran scored a consolation three minutes later as Ali Gholizadeh managed to squeeze a ball through to Taremi, who showed his quality by lashing in off the underside of the bar.

Maguire went off looking bleary soon after as England made a swathe of substitutions.

Rashford was among those introduced and made an immediate impact, collecting Kane’s pass, cutting inside and coolly scoring.

Callum Wilson and Grealish were others brought on by Southgate, with the former teeing up the latter as England netted a sixth.

Jordan Pickford brilliantly tipped a Sardar Azmoun strike on to the crossbar but would be beaten again in the 13th minute of second-half stoppage time.

Taremi coolly scored a penalty awarded after the VAR advised the referee to review images of his shirt being tugged.