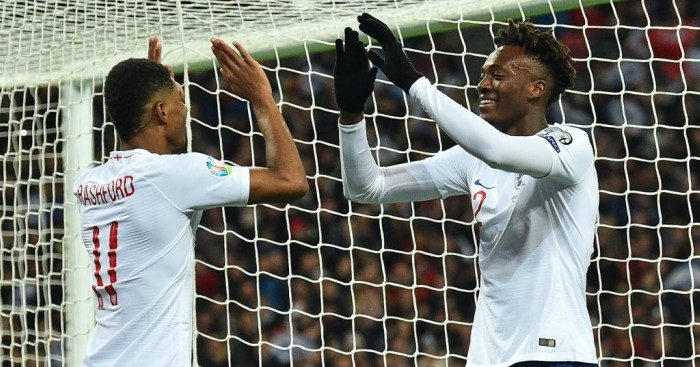 ‘LOOK AWAY NOW 3 LIONS FANS!’ says the back page of The Sun, already gleefully but respectfully planning prayer mats for summer supplication. The Daily Mirror warn us of ‘Euro fears for Kane’ while Stan Collymore uses the inside pages to suggest that Marcus Rashford has proved that he can fill in as centre-forward (while patently not playing as a centre-forward). Alarm bells are being pressed and panic rooms are being activated, even before we know whether Harry Kane is actually going to miss Euro 2020. But even if England face a summer-less Kane, there really is no need for fuss; they have rarely been so well-equipped to cope.

Right now, Kane is one of six English players already in double figures for Premier League goals this season. Even if you discount the semi-retired Jamie Vardy, that still leaves Danny Ings, Marcus Rashford, Tammy Abraham and Raheem Sterling. You could reasonably expect Dominic Calvert-Lewin (8) to join them by the end of the season, while Jadon Sancho has notched nine Bundesliga goals so can confidently be added to a six-strong list of relatively prolific, available English goalscorers.

Doesn’t sound like much? Think back to 2016 and a list of double-figure English goalscorers that read – in its entirety, at the end of the season – as Kane, Vardy, Jermain Defoe, Troy Deeney and Dele Alli. Daniel Sturridge went to that summer’s tournament having scored eight Premier League goals that season.

Fast-forward two years later and the list of double-figure English goalscorers read – in its entirety, at the end of the season – Kane, Vardy, Sterling, Glenn Murray and Wayne Rooney, who had already retired from England duty. Danny Welbeck went to that summer’s tournament after scoring five Premier League goals that season.

With that sort of context, the breadth of England’s forward options feels incredibly healthy. This is not a return to the golden age of England strikers when Ian Wright was left out of the Euro 96 squad and Robbie Fowler was largely confined to the bench, but they have arrived at a juncture – thanks to Danny Ings’ fitness, Chelsea’s transfer ban and a boom in ‘wide raiders’ (thanks Gareth) – where Kane’s possible unavailability should terrify nobody. England do not have a Kane clone, but nor do they have a crisis.

The idea that England would need to change formation or Rashford’s position is ludicrous; he has scored in each of his last three England games as one of the wider players, and between him, Sterling and Sancho, England are blessed with dangerous pace coming in off the flanks. Abraham is the natural replacement for Kane, with Ings also earning a recall after feeding off relative scraps this season. Save your England panic for their England midfield options.

The last England ladder saw Kane return to the No. 1 spot after a brief sojourn, but only because he had not grabbed a teammate by the throat in the England canteen. Of course he is important, but we have arrived in a bizarre uncomfortable place where we would actually worry more about the absence of Jordan Henderson.